Bits And Pieces And Pizza Too 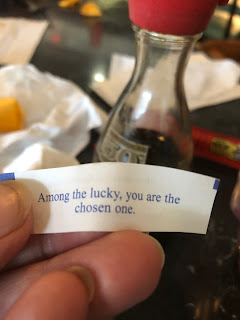 Went and voted this morning. Lightening did not strike the church. I was given an "I voted" sticker which I immediately lost. It's either in my car or in one of the many parallel universes which exist inside my purse. I am pretty sure that purses are proof of parallel universes. What else could explain how you can search and search through one for a specific item, not find it, give up in frustration and then a day or two later, reach in for something else and what you had been fruitlessly searching for comes right to hand? I once lost an entire bag of pot in a purse but it reappeared about a week later.
Ah me.
The days gone by when I would carry a bag of pot in my purse.
I am so lucky I never went to jail.
My Chinese fortune cookie which I broke open after today's lunch was only speaking the truth.

So yes. I lunched with Lily and Loren and Maggie at China First, the big Chinese buffet. 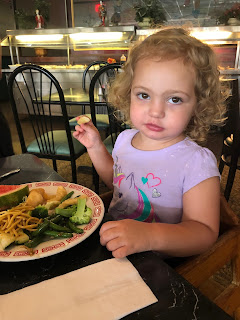 She just keeps getting cuter and cuter. And she is really starting to talk on a different level. She discusses things that happened days ago and has a great need to communicate. Lily says that she often points her little finger when Lily asks her to do something and says, "Just a minute!"
Wonder where she learned that.
She is also incredibly stubborn about doing things herself to the point of ridiculousness. For instance- if she is sitting in the high chair and you take her out and she wanted to climb out herself, she will climb BACK in and then back out. Herself.
Oh, she is a wonder!

After lunch I went and did a little shopping at Costco and Publix. Costco really is like Disney World for adults. I only needed a few things and I did not impulse buy anything and so that was a small miracle. No barrels of coconut oil or vats of dark-chocolate-covered dried mangoes or flats of cupcakes or skin care products promising eternal youth.
Boring.
Then on to Publix where I checked off everything on my list and did buy some impulse items but not vats or crates of anything.
Oh, how productive and efficient I felt!

Miss Violet has completely joined the flock again showing no apparent angst whatsoever about the four weeks of time wasted sitting on eggs. In fact, I think she laid me an egg this morning. It's hard to tell right now who is laying what. I can't wait to start getting some colored eggs from the Americaunas, Miss Pansy and Miss Eggy Tina (I had to recycle that name). There's not a day goes by that I do not send a silent thanks to Kathleen for bringing me my first chicks. How did I live without a flock of chickens? Can less than a dozen chickens be a flock? I think so.
Here's a question that I pondered today- Does Ringo know that he is about a third of the size of Liberace?
I hope so. That could help prevent a lot of problems but he probably doesn't.
They don't call small, hyper-aggressive men "banty roosters" for no reason although Ringo is not a banty. He's a jungle fowl.
I love saying that.
Ringo is a jungle fowl.
You know what? Ten years ago I could never have conceived that I would ever be uttering a sentence like that but then again, I didn't even know what a jungle fowl was until this spring and quite frankly, I'm still not quite sure. I do know that on an episode of "Parts Unknown" when Anthony was in Madagascar, there was a shot of a rooster who looked just like Ringo. Which thrilled me far more than was rational.

And that's pretty much it for the day in Lloyd. I hope I voted for the right people. The man I voted for for governor is a bit of a long shot but I went with my heart. I mean, any Democrat who might win the election would be such a vast improvement that I can't begin to describe what my joy would be (Florida hasn't had a Democratic governor in twenty years) but this man is the mayor of Tallahassee and when the Supreme Court decreed same-sex marriage legal and many backward ass counties were balking at the actual performing and registering of gay marriages, Andrew Gillum made an announcement that Tallahassee welcomed all to come and get married. That love was love. And he's extremely anti-Trump, very pro-gun control, and environmentally friendly. But it was the welcoming gay couples to Tallahassee that stole my heart and he has worked his ass off, campaigning.
We shall see.
And if you haven't seen the video HERE, please watch it.
Especially is you have given up on hope. This is a man who speaks the truth and shames the devil and bless his heart and I would vote for him for president in a heartbeat.

All right. That's enough.
Time to go make the pizza.