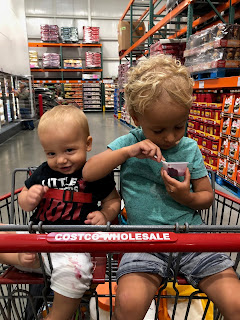 It rained and rained and rained this morning and I woke up late, my dreams keeping me weighed down heavy in my bed. It was a struggle to come up and out of that snug world as the rain poured down on the porch beside me.
I thought at first that I would spend the day here quietly and alone doing whatever it was that I felt like doing but Jessie wanted to get those boys out of the house and so we met at Costco where the plan was to let August run a little bit to get some of his ya-ya's out since he couldn't go outside and since they are leaving for North Carolina in a few days I let myself emerge from the little world here.
I stopped at the post office on my way and I was the only in there except for the post mistress and I heard her on her phone saying, "Mama, are you still bleeding?" and I was glad that I didn't have any mail because it seemed like too personal a thing to be there, listening, and I slipped back out into the gray misting rain and drove to town.

It was a great day for sampling at the Costco and those boys ate everything from haddock in butter and white wine sauce to yogurt smoothies to buttered sprouted grain toast. Look at how big that Levon is getting! Look at that grin, that little shoulder pulled up to the side of his head which makes him look even cuter than he normally does. I remember when Gibson used to do that.

I got to see the woman who works there whom I have a very sweet affection for. She is young, like my children, has a daughter. Her mama lives in Puerto Rico and she misses her. She always wears beautiful mermaid make-up. I have mentioned this before. When she saw me today, she wrapped her arms around me and kissed my cheek and we talked for a little while.
It's so odd how I fall in love with people I don't really know but you DO know, don't you? If you let yourself listen, you can hear hearts. You can hear the good ones, you can see it in their faces.
I am not telling anyone anything they do not know.

Two more chickens have gone missing. Babette and Dixie.
I heard Liberace crow and crow today.
Two roosters. Nine hens.
I'm about to give up on the poultry business. It's wracking my heart.
Oh. You know I won't. Not now. Not yet.

I shelled some peas and am cooking them for our supper. I'm going to make cornbread. I went to see if there was any okra worth picking.
One. I picked one. And two green beans. And one red chili.
This is depressing.

In fact, I am feeling a little low this evening, even though I had such a good time with Jessie and the boys. August was mine-all-mine because his Boppy wasn't there and we went to Japanica and the sushi chef let August feed the giant goldfish and he shared my salad and his mama's miso soup and he ate white rice and fried rice and salmon and edamame too. Where does that tiny boy put all of that food? Levon had his share of everything as well. Jessie has not messed with one bit of baby food for that child. He gets everything. He has six strong teeth and he can chew and he still loves his mama-milk. I believe this is how it should be done. 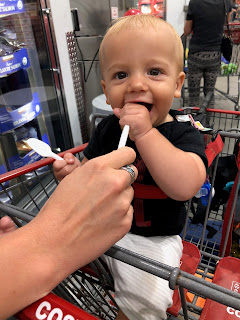 And this is the world I live in but in another world, collusion's not a crime, y'all! And it doesn't matter because there WAS no collusion. And Jeff Sessions needs to end the rigged witch hunt right now. And you need an ID to buy bread and milk, according to the man who's probably never been in a grocery store in his whole entitled gold toilet existence.

I bet you almost anything that Owen knows more about the real world and how it works than Donald Trump does. I know without doubt that he's smarter and has more empathy than the president.
Not my president but that guy in the White House.
And August, who is not yet three, has better manners.
"Thank you," he says, at every appropriate opportunity. And "Excuse me," he says, when he wants to add something to the conversation.

I need to go cut up shallots and make a tomato salad and make that cornbread.

Let us all hold hands in our minds. I think we probably need that. Here. Here's mine.