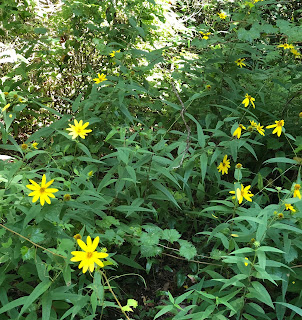 Say what you will about this summer's heat and humidity, the rain has been abundant here and the woods and fields do not have their usual August look of weary dusty drooping. This is the kind of thing you do not notice unless you keep internal history memories and I guess I'm of that age now where I do. I promised myself again this morning that I would only walk two miles. TWO. And then of course I walked three and a half but mostly that was because I had to walk to the place where I can pee hidden from the road. But it was not such a bad walk and I did not hate every step but was able to enjoy at least some of it. I caught my rhythm early and that always makes it so much better.
But I was glad when it was done.

I had to go to town to get a mammogram today. For some reason, I was not so anxious about this. I remember when I got my last one four years ago and was going through such horrible anxiety and I had been convinced for months that something was wrong with my breasts or at least one of them and I almost died, forcing myself to finally go and get that damn thing. But today I did not have that fear and there is part of me which has always thought that breast cancer is not what I'll die of. No family history and I nursed my babies forever and forever but who knows? Things happen for which there is no explanation and now I simply have to wait for either good news or the dreaded call back.
The lady who did my mammogram today was very sweet. When she saw who my doctor was she said, "Oh! Isn't he cute?"
I could barely get the words out to agree with her because he's so beyond cute.
"And he's so nice," I said.
"I've heard that. That he listens," she said.
"He does!" And then I spent a good minute or two praising him and we both agreed that we hope with all of our hearts that he doesn't get jaded. The lady told me that she'd been working in the medical field since the seventies and that she has seen so many doctors do just that. Start out bright and good and eventually get jaded and tired.
I hope I die before that happens to my dear Dr. Zorn.

After the ritual squishing of the bosoms I met up with Lily and her children at Pay-Less for school shoe shopping. Gibson found a pair there but Owen didn't and so then we went next door to Ross where Owen got his shoes and Maggie got a pair too. And then we went to get frozen yogurt which was perfect for this hot summer day. Here is Ms. Magnolia with a very full mouthful of strawberry and chocolate deliciousness. 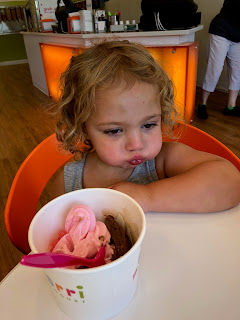 Yes. That is a bruise on her forehead. She fell at a playground. She looks like a little cream puff but she's really a, well, bruiser, and afraid of nothing.

And then Lily herded her small pack of children over to Melissa's to get Gibson's hair cut and I went to Publix and then I came home and while I was making up the bed with clean sheets I found a dead mouse in my bedroom which I imagine Maurice gifted us with and it's been a full day.

I've hated even mentioning it but my little banty Violet has been missing for a few days. It suddenly occurred to me this morning that perhaps she is somewhere hidden, sitting on eggs because she did that exact same thing last year or the year before. Do you remember when I found her, sitting atop a veritable mountain of eggs, both from her and other hens? I'll never forget what Owen said when I showed him.
"She is having birth!"
Oh, I hope that's what she is doing and if so, I hope she is hidden well. Nothing would please me more than seeing that tiny brave hen leading a line of chicks to meet the aunties.
And speaking of which, when I got back to my car when my walk was done I saw a mother wild turkey and four of her young in the dirt road which I park beside.

And here is a video that Jessie sent me of August playing the violin up on Black Mountain where his relatives are all musicians like his mama and his daddy.


This is why I cannot be jealous of the time he spends with his mountain folks. They are part of the whole which makes August who he is.
And that's a beautiful thing.