And OH! It Rained And That Was Beautiful 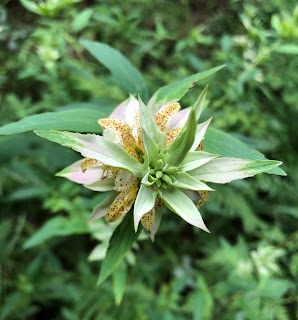 This is a horsemint flower that I stopped and took a picture of this morning on my walk. It's one of those flowers that unless you're paying attention, you're going to walk right by and if you were in a car or on a bike, chances are good that you'd never notice them and yet in some places they are blooming abundantly, tucked into what this year is the verdant and thriving greenery beside the roads under the oak trees. I transplanted some a few years ago from a spot I found in the woods but they didn't take. I am tempted to try again this year, perhaps in a different spot. And I have also just learned that some nurseries sell it in pots and some companies sell packets of the seeds and those might be options too.

I removed Violet's egg bucket from the garage this morning and put it in the coop and strangely, there were only six eggs where once there were eight. There were no eggshells in evidence, though, so I assume that some critter got two eggs when she was on a break to eat and drink. I see absolutely no signs that any of her little eggs hatched and there would be eggshells, at least, to show that they had. She did not seem distressed that I took her eggs at all but has been running about and eating and drinking and I've noticed that she's spent a lot of time in the garden, probably eating green things to catch up on her nutritional needs. Tonight, when they go to bed (and I hope she roosts in the hen house) we will get rid of the eggs in the woods behind the coop. Perhaps some animal will not mind eating month-old eggs. Who knows?
Not me.
In other chicken news, I found yet another Dearie egg right in front of the hen house. That's three she's laid now that I've found. They are small and I wonder if they will get any bigger or if my jungle fowl are just going to lay small eggs. I do not mind small eggs. Sometimes they come in useful, such as when you're increasing a recipe by half and it calls for one egg in the original. Two eggs would be too much but one regular egg and one banty or jungle fowl egg (I suppose) would be perfect.

I've had a bit of the blues today but I am glad I walked because that did help. It did not seem like torture today and went fairly easily but I did not go too far. Far enough in this heat. I was thinking I'd go to town because I have things I could buy and will eventually need but decided against that and stayed here and mostly ironed and watched more episodes of Parts Unknown and with every one of them, I fall a little more in love with Bourdain. I absolutely hate this whole mishegoss going on with Asia Argento, the woman he was in love with before he died. For those of you who do not know, she was one of Harvey Weinstein's accusers and Bourdain backed her up big time and became a very vocal supporter of the Me Too movement but then last week the media reported that Argento herself was being sued for sexual harassment by a man who claims that she initiated sex with him when he was seventeen and there are allegations that Bourdain paid the guy off. I could see that happening. I think he was obsessed with her and I think she may well have been obsessed with him. Or perhaps they just loved each other. "Obsession" sounds like a crime drama emotion but I think that most of us who have been in love have felt obsessed by our beloved at one time or another. And they both seemed like people who had walked more than a few miles on the razor's edge and had the scars to show for it.
Ah well.
It ain't my business but it's impossible not to speculate on why and how when watching his show. He was so very charismatic and could be impossibly charming and sometimes heartrendingly sad and well, he was just a fascinating and talented human animal and I mourn him still. Not to mention that his show was pure, beautiful genius.

Speaking of mourning- the whole US seems to be in an uproar over John McCain's death and how Trump is reacting to it and blah, blah, blah. I've sort of stayed out of the conversation because McCain was never a favorite of mine and after he brought Sarah Palin into the fray I lost a whole lot of respect for him as a politician. I mean, I appreciate the bravery and courage he showed during his years in captivity and I also respected his firm ideas on torture and that it should not be used by our country and of course his eleventh hour saving of the Affordable Care Act (or at least some of it) but still- Sarah Palin. I think that his nominating her as his VP candidate is what started a lot of this fucking mess we're in today. Perhaps if so many Americans hadn't consigned themselves to and even celebrated the idea of a completely unqualified right-wing asshole rising to one of the highest offices of the land, there never would have been a Trump in office but again- what do I know?
Not much.
But of course Trump has acted like a sulky child about his death but did we expect anything different from the man who said that McCain was not a hero in his eyes because he liked heroes who hadn't been captured?
As if he had a clue about any sliver of the reality of what goes on in war.

Stop. Stop, Mary.
This is not helping anyone.

Tomorrow is the day we go to vote in the primaries for Florida. DO YOU KNOW HOW HARD IT IS TO GET ANY INFORMATION ABOUT THE CANDIDATES FOR SHERIFF OF JEFFERSON COUNTY, FLORIDA?
Forget about it.
It's like the land that time forgot here. No social media presence whatsoever for some of them.
But for the rest, I know exactly how I'm voting and gun control and environmental issues are at the top of my list of criteria.
And so I'll take my marked-up sample ballot down to the Baptist Church across from the trash depot and enter the halls of the holy and if the LORD does not strike me dead, I'll cast my vote.

I'm going to go make soup. The kind of soup that maybe Anthony would have loved. It will have some shrimp in it, ginger, peppers, soy sauce, garlic, scallions, sweet potato greens, some of my wild ass volunteer arugula greens, spinach, rice noodles, and dumplings that come in a bag from the Costco. Also, Thai basil.

And if that doesn't perk me up some, I think I better get my ass to the beach this week. It's been too long and I need some healing. Or maybe to Wakulla Springs. We shall see.

At least Mr. Moon has a full closet of nicely ironed shirts and Violet has returned to the land of the living.