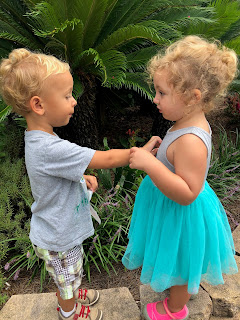 Today was all over the damn place. Woke up this morning and felt like the world was crashing around me. A morning of existential angst and despair and fuck it, fuck it, fuck it.

These days do happen.

The best thing was that we'd agreed to have a family meet-up at El Pat, our Mexican restaurant where they know us and we know them and they put up with us and we appreciate that. Hank and Rachel, Lily and Maggie, Jessie and August and Levon, Mr. Moon and I were all there. August saw his Boppy and that was that for him. He crawled on his lap and barely budged. 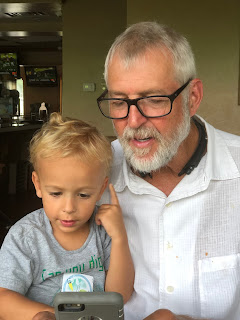 I got no notice at all from the boy until his grandfather left and then he deigned to sit on my lap and ask me to draw him pictures. But that was okay because Maggie came and sat on my lap and she shared my lunch and August shared Boppy's lunch and it was all good. Levon even let Boppy hold him and Maggie had to crawl up into that lap too because she loves babies with all of her passionate little Maggie heart. 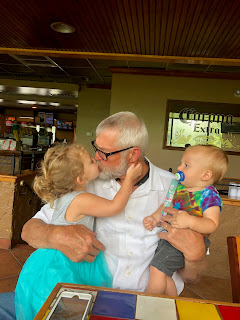 She loves her Boppy too.

But it was after lunch that the magic happened. For some reason, August and Maggie seemed to really notice each other and want to communicate in depth for the first time. They sat first on the steps outside the restaurant and had a conversation about their shoes and August's socks and Maggie's lack of socks. 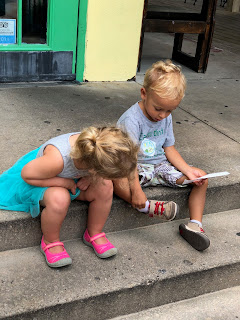 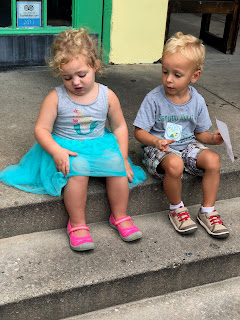 It was the most beautiful thing. Honestly, all of us adults simply stood and watched them as if we were watching a play. It was not just entertaining, it was amazing. All of a sudden, they've both achieved a level of vocabulary which allows them to have a real, true conversation.
After awhile, for some reason they moved to the little wall beside the landscaping and continued the conversation. 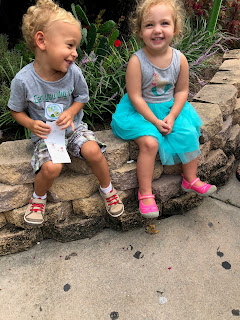 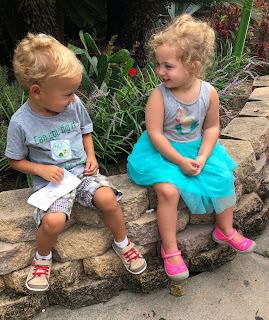 They even tickled each other which led to this. 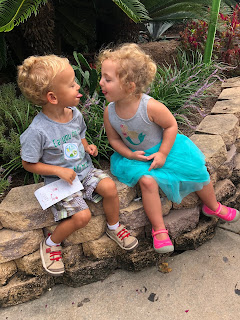 I swear, we stood there and watched these cousins talking and interacting for at least fifteen minutes and then there were places to be and things to do.
But oh, how sweet it all was to my heart, to see this interaction, these two cousins finally, after so many tries, finally figuring out how to be together as friends.

So I was feeling somewhat cheered when I got home but then I opened up Facebook to discover that a man who has been a friend of mine for longer than I've known my husband died today.
Hit me hard in the gut, even though he's been sick for awhile and I knew it was coming. He'd been diagnosed with a cancer that the doctors admitted they could not cure but because he loved his wife and his kids and his grandson, he agreed to get surgery and do chemo to stave off what he knew was inevitable. And he was doing okay. Doing okay.
His wife had retired and they'd moved from Montgomery, Alabama to Tampa, Florida where they were both from. And Zig was getting gigs and playing some. He was a guitar player and a serious one and he never felt as if he was truly living unless he could play and so it was a good thing for him but then he got a MRSA infection that took him down bad. He spent a lot of time in the hospital and felt worse than he'd felt throughout the whole cancer but once they got that under control, he got a pulmonary embolism which went undiagnosed and led to a heart attack which miraculously did not kill him but he never recovered from that and well, now he's gone.

I wish I'd gone to see him play again, especially after I knew he was sick. We did talk back and forth some via FB messenger. I'm glad of that. I think he appreciated the fact that I never told him I was praying for him. Sometimes we discussed Cuban food and how to make it. 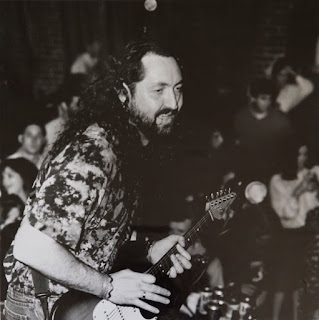 Ziggy Luis. There are a million youtubes.

Maybe tomorrow I'll try to write something more in depth about him but for right now I'll just say- Fly free, Zig. God. You were beloved.
And your version of Bell Bottom Blues was always my favorite.