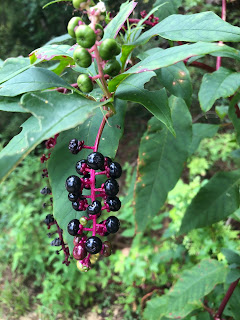 Poke Berry. It's pretty, isn't it?

I've had as low a day as I've had in a long time and I don't know why unless I triggered my own damn self with that post yesterday and of course that's possible or maybe I just miss Jessie and her family or maybe, as I feel, I really am a completely worthless person who is taking up space on this precious fragile watery rock of a planet we are hurtling through the universe on.

Well, whatever, we all have those days and I know it and I feel pretty certain that this doesn't indicate a long period of depression because I haven't had one of those in a long, long time and for that I am eternally grateful. 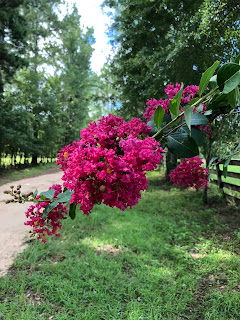 I did take a walk and instead of parking my car where I usually park it on White House Road I parked it at the end of a road that leads off of it- Farms Road- which I haven't walked in a long time because it's all uphill one way finishing off with a very steep grade that I've seen UPS trucks struggle with and I just can't in this heat. So I walked the uphill part for almost two miles before I turned around for the mostly easier downhill bits and it was beautiful and shady and it's not a paved road so in theory it should have been cooler but it was still a special sort of hell. 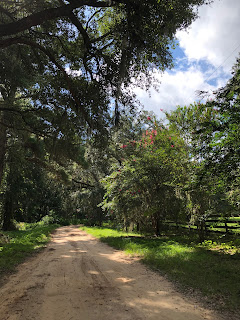 However it is a pretty road with yes, farms on it, and houses ranging in size and style from mini McMansions (but not many) to single wide trailers to what appears to me to be a handmade hippie house from back in the day to one place that screams Gracious Southern Living, set in acres of carefully tended wooded parklike grounds which is all nestled up to a peaceful and sizable pond which taunts and calls to me like a siren promising cool respite within its bosom.
Also. Swamps. 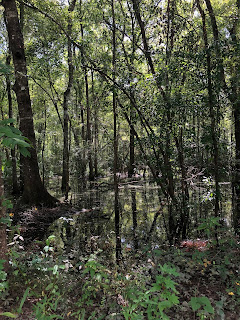 I have no doubt that alligators must lurk in some of these low-lying places although I did not see any today and if I never see any that will be fine with me. We've had so much rain that the ground is saturated and is holding the water and it makes for its own sort of beauty, doesn't it?

I got home to find two hens on my back porch, waiting politely for me to show up and feed them some cat food. 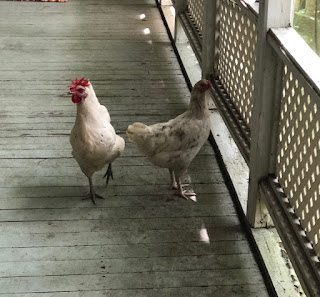 I also had a message on my answering machine from my doctor's office telling me that my mammogram had come back normal. I really do appreciate their calling me in such a timely fashion. The radiology place said they'd be sending written results to me in two weeks which is a long damn time but the lady who did my own personal mammogram said that the doctor's office would be hearing from them in 2-3 business days but I still didn't expect any word until at least Monday.
So. Boobs are good.

And the rest of the day I mostly spent in a horizontal position. I watched another episode of Parts Unknown and I laid down on the bed and rested and read and then slept which is a completely unusual day for me.

I did clean out the hen house and checked on Violet. She is as still as a held breath of lavender gray feathers, sitting on what I presume are eggs. I have to admit that I'm having a hard time not moving her to the chick box. We could move that whole bucket there and she'd be so close to water and feed. But I tell you what- she's got herself pretty well wedged in and hidden. Let's see how long I can stand to not interfere. It takes three weeks for the eggs to hatch once Mama starts sitting on them. I sure would like to get a few of Mick's babies.

And, as far as I know, Trump wasn't arrested today and that's all I could give a shit about in political news right now.
I know. That's awful. But it's the sad truth.
For today at least.