Today's Post Brought To You By A Cranky Old Woman 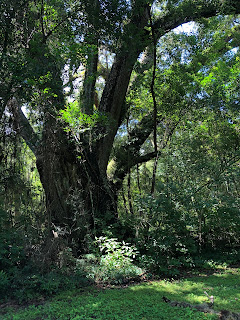 I decided I'd get a little work done outside today and I did.
"Little" being the operative word here.
But Lord, it's so hot. And the bugs.
I know, I know. Your eyes are glazing over.
You've heard this before.

But anyway, I did manage to pick up some downed branches. Not the one that fell from the enormous oak tree in the picture above, though. 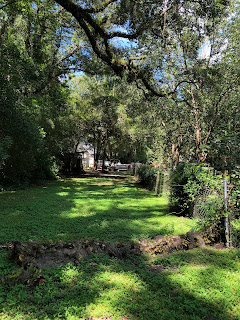 It doesn't look that big in the photo but if you look carefully, you can see that the weight of it took down a corner of the chain link fence as if it were chicken wire. 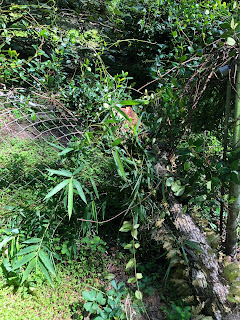 I also pulled a few of the thousands of invasive plants which I used to think were a type of wild gladiolas but which are not but which ARE invasive as hell and have taken over parts of my yard.
A fool's errand that.
Just like trying to pull the stupid horrible invasive glory bower which I also pulled a few of. I used to really try to get these things out of the yard and boy! You should see the area of the yard where I dumped the goddamned ones I pulled up. It's like a grove of the fucking things.
Sigh.
The whole time I was doing all of this I was getting punctured by mosquitoes like a seamstresses'  pincushion and a few yellow flies joined in just for fun.
Since all of that had been so delightful and rewarding I decided to try and weed a little bit of the garden which was in shade. That was equally amusing and by the time I came into the house and took my shower and ate my late lunch, I decided a nap was in order.
So I slept for an obscene amount of time and woke up to discover that no, no household fairy had snuck in to finish my laundry or unload my dishwasher or make the cake I was planning on making for a party that's going to be here tomorrow.
Damn household fairies.

But yes, there's going to be a party. Our Taylor, our Tay-Tay, our darling girl, is leaving soon for Houston where her boyfriend has a job. This is huge news and none of us have actually taken it in. Taylor and Paul are getting married as well and tomorrow's little gathering is a potluck just to say "good-bye" and "good-luck" and "we love you" and "congratulations" and "how in hell are we going to live without you?"

Jessie reports that they made it to Black Mountain. Of course Levon started running a fever yesterday and is a little sickish. You can't possibly go on a trip with children unless one of them comes down with something. This is just the way it is. 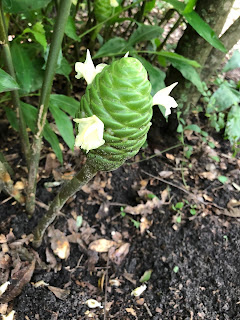 The pine cone lilies have magically sent up their strange and wonderful cones. It's also known as pine cone ginger or shampoo lily. When the cone matures and turns scarlet, it can be squeezed and the liquid from it is supposedly a very fine substitute for shampoo. Ellen, do you have these? If not, I should send you some bulbs this winter.

And now I need to get in there and do what the household fairy did not do and also make some supper. It ain't gonna be as good as last night's snapper, I'll tell you that.

In other big and important news Mr. Moon has installed all of the lights in his new bathroom which now makes it the room with the most lights in the entire house. He also purchased a toilet today.
It's all coming together.