Election Result And Bless His Heart! 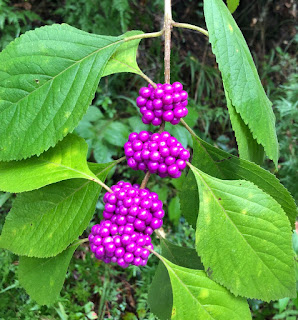 I am sure that because of all the glorious rain we've had all summer long the beauty berries are bigger and more abundant and more gorgeously colored and glossier than I think I've ever seen them. I do believe that is my favorite color, right there. Fuchsia. It's just so rich and so splendid.

So yes, Andrew Gillum did win the primary and it would appear that the whole country is alerted to what could be one of the most interesting contests for governor in a long time in any state. I was actually surprised that Gillum won because he is not a millionaire, has not served in Congress, is fairly young, attended FAMU, which is an HBU, sounds almost like a socialist (Medicare for all!) and is African American. But hell, Florida is a state of constant surprises and this one was extremely exciting. The reason I say this is going to be very interesting is that his Republican opponent could not be more different. White, of course, Ivy Leaguer (Harvard and Yale), served in Congress, has some money, and is an avid (some would say rabid) Trump supporter.
And...the shit is already happening. Trump started out this morning by tweeting

Not only did Congressman Ron DeSantis easily win the Republican Primary, but his opponent in November is his biggest dream....a failed Socialist Mayor named Andrew Gillum who has allowed crime & many other problems to flourish in his city. This is not what Florida wants or needs!

and then DeSantis went on Fox News and said that the last thing we need to do is "monkey this up" by trying to embrace a "socialist agenda."

One can only imagine how low the Republicans will go to prevent someone who reminds them of Barack Obama to become the governor of Florida. I sure hope Gillum is tougher than nails and garners plenty of support because he's going to need it. And so is his wife. I wonder how many private detectives DeSantis has already hired to dig up whatever they can about Gillum.

Well. I ain't no political expert and even those who were did not exactly see this coming but I have hope that Gillum can win the general election. I really do. And wouldn't that just be the finest thing?
I'm so glad I voted for him.

And so I was cheered this morning and I took a good walk where I saw that beauty berry and a lot more in various stages of ripening and also this beautiful beast. 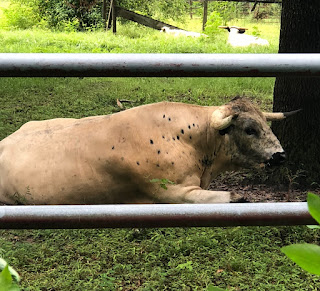 I love his freckles. He gave me a look as I stood and took his picture through the fence but as I was obviously neither threatening or of interest, he returned to his look of meditation into the middle distance, dismissing my presence entirely.

When I got home, Jessie and boys came out. I had invited them and Lily and Maggie to come out and play and eat leftover pizza but Lily was at work. It was great fun though to have my little guys over although I think that Levon ate more pizza than August did. 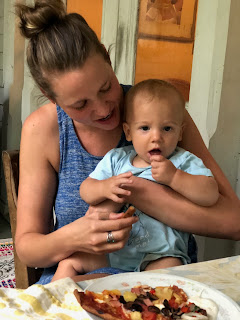 August had too much to do to mess around with eating.
Jessie went upstairs to follow August and ended up getting a cleaning bug.
Listen- I am ASHAMED of how much mildew I've allowed to collect around here. My beautiful staircase is covered in it, especially the spindles which support the bannisters. There's about a million of them. Also, she reported that there was a lot of dirt and some cat vomit upstairs and honestly- I just don't go up there. So she cleaned up the dirt and dust and cat vomit and then started on the spindles with a rag and bleach and Fabuloso water. She got about halfway up while August and I read some books and played with Levon and then August and I wanted her to play the matching game and so she stopped and we had a rousing contest which August won again. He's very, very good at the matching game. He also put the entire alphabet puzzle together which takes up half the hallway and played with the marbles I've found in this yard. 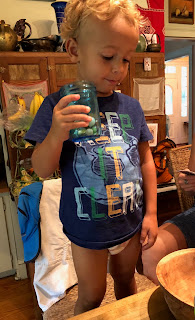 Those are marbles in that glass, not ice.
He also played with the few remaining plastic cocktail mermaids and monkeys I have left which Gibson also loves to play with and by golly, I'm going to order some more of them off of Amazon.
I've never in my life put one on a cocktail glass but my grandkids love them and I think they're swell. 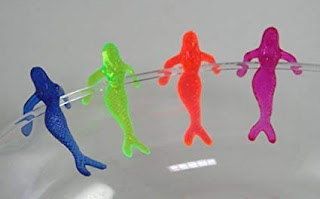 Right before Jessie left, the rain began to pour down and we all got wet getting those boys in the car even though umbrellas were involved.
I came inside and sighed a huge sigh and took up the bowl that Jessie had been using to put the cleaning elixir in and rinsed out the rag and started on cleaning the spindles above where she had stopped. When I got to this point 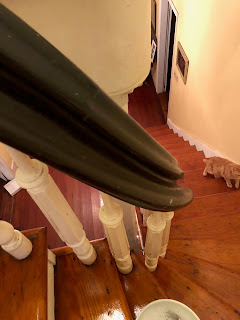 I stopped myself. There are probably about another dozen or more that lead up and then around and I was just OVER IT! Plus, as you can see, Maurice was worried about me.

The other day Mr. Moon came in muttering something about a repair on the house that needed doing and how the lawnmower was broken and the yard needed cutting and I said, "Well, why don't we just go on and move to Westminster Oaks now?" which is the assisted living place my mother moved into after she was no longer able to take care of herself safely.
"They'll take care of all that shit," I said.
He sort of laughed. And sort of didn't.
I was sort of kidding and sort of wasn't.
Frankly, we could never afford Westminster Oaks and that's the truth.

It's still raining. I am trying an actual recipe because I am sick and tired of all of the things I cook and if it doesn't come out well, I can blame the cookbook. It seems like such a grown-up recipe and has chicken thighs and olives and tomatoes and wine and shallots in it. Mr. Moon has requested the crispy okra again and since I just picked another nice bunch of it, I'll make it.
Dearie laid her egg IN THE NEST THIS EVENING! I know this is true because she was on the nest when I went to check for eggs and hopped off when I came in and there was one of the small and beautiful eggs she lays sitting right there, as warm as could be.
I held it to my cheek, the way I do with warm, freshly-laid eggs and I thanked her profusely which is the proper thing to do.