Watch The Video. You Will Laugh

The other day I watched this video via the Facebook and I thought it was pretty funny and also held a lot of truth. And I highly recommend that you watch it because it's entertaining as hell.

Anyway, I went shopping today and I couldn't stop thinking about the video and how it's the same for so many of us when we go clothes shopping.

I went to the damn mall. Yes. The DAMN MALL. But I knew that Dilliards was having a major sale and so I thought I'd trot in there and check it out and then scoot on down to Gap which is two stores away and that would be that.
And it was.
Still, though, it was a bit horrifying. 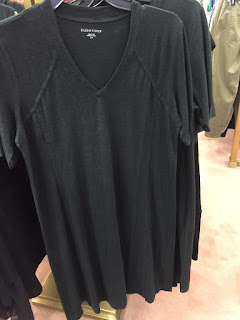 No. It is not a sleep shirt from Target. It's an Eileen Fisher dress. And like the guy in the video said, it would be a loose-fitting potato sack to cover up all of...this.
But. It cost $198.00. One hundred and ninety-eight dollars!
After I quit laughing I moved on to the sale racks.

I found some flowy shirts and actually tried them on (and when did they start putting your name on a whiteboard outside your dressing room?) and was too mortified at what I looked like in any of them to even consider buying anything.

Moving on. I went to the Gap. They, too, were having big sales. Plus, if you bought $75 worth of stuff, they'd take off $25 so, as the saleslady who was explaining all of this to me said, it was basically like getting $75 worth of stuff for $50! Yes! I had already figured that out! But sure, it was nice to hear.
And then I found some shorts (women's shorts!) that fit me in size Godzilla (as I wrote a friend of mine) and I bought three goddammed pairs and two of them are linen and also a skirt and a pair of socks (to bring the total up to $75) and all of that only cost $50!

Are you following me here?
Can YOU do the math?
I knew you could.

Then I went to the Goodwill where I found nothing I wanted although I had a pretty good time because Goodwill is always a good time, wandering around and wondering who bought this shit to begin with. I swear I think I watched a woman scam her way into walking out of there with a piece of furniture she hadn't paid for. Not certain, but I think so.

I have woman shorts and they're fine although the pockets are sadly lacking in depth and number compared to men's cargo shorts. I guess women aren't supposed to put anything in their pockets except a credit card and maybe a tiny tampon. Whatever. I'm going to Roseland where the average age is probably about eighty-two although I am certainly senior citizen enough to fit in now whereas I used to be a spring chicken when I visited. It's going to be hotter than hell and maybe I'll go to the Goodwill there to see if I can find some shirts I like. I'm so excited to be going that I can hardly stand it. I am ready, y'all. And Hank is going to house and cat and chicken sit for us and so my soul is at peace there.
Not sure if Trixie's going to be here when I get back. I don't know if she's sick or if she's just really lazy. She sat in a potted plant on the kitchen porch for at least an hour this evening, her stalwart friend Miss Mabel beside her. 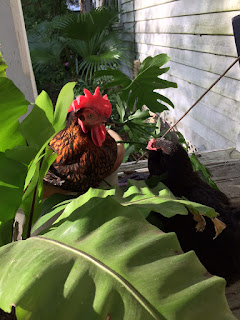 And then damn if Mick didn't jump on her when she got off and resettled back under a sago palm. I guess he still thinks she's pretty good-looking. It's so funny. I've never seen him fuck one of the white hens. He may be racist but he's not ageist.

The older I get, the less I understand about life. But it sure is interesting.