We are living the dream here, y'all.
Gorgeosity is everywhere and Lis took a walk with Lon down the driveway this morning (they have a long driveway through the woods) before I even got up. Hey! I read until way too late.

Lon made us kale and berry and peach smoothies and then a few hours later, I made a hash of potatoes and kale and broccoli and tomatoes and a tiny bit of chicken and onions and cooked all of that with some of our eggs.
We also had leftover cucumbers and tomatoes from last night. Lis set the table. She is doing everything she can get away with.
This is brunch setting, Lis style: 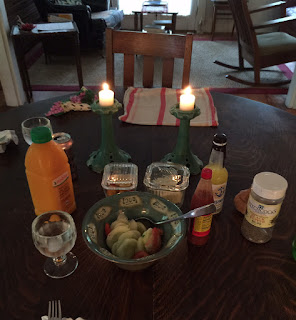 There are perhaps as many definitions of graceful and gracious as there are of the people who represent these traits. When I tell you that Lon and Lis embody every one of them, I am not exaggerating. Ask anyone who knows them. They will not disagree.
It is such an honor and a joy to hang out with these people.

Yesterday we spent half the day on the bed watching "Call The Midwife," as I said before, often all three of us cozied up on the bed together. We kept joking that Lon was truly the luckiest guy in the world except for the fact that the two women were both fully dressed and he was having to watch possibly the most estrogen-fueled TV series ever made.
Let me just say that he slept through a great deal of it and I cried a lot.
We promised him that we would watch something different today. He's such a gentleman, though, that he'd let us break our promise if we really wanted to.

I hear that all is well at home. Imagine! Life is going on without me!
Well, there was a bit of a scare in that Maurice disappeared for almost 24 hours but then she showed back up to both mine and Mr. Moon's great relief. She helped him unpack his work-out bag this morning. 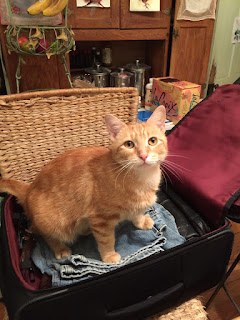 I know, right? It's a cat.
Our cat. Our silly cat whom we really do care about way too much because we are too old to have a baby although Owen seems a bit obsessed with the idea that I would like to have another one of my own. I keep telling him that now is the time for me to have grandchildren and that is exactly what I want, but anytime he plays a magical creature who can grant me wishes, that's the wish he suggests. And remember when he told Boppy that I was leaving him for a new husband in Las Vegas but that it was okay because Boppy could marry a new wife, a younger wife?
Yeah. He's scamming for one of us to have another baby. I wonder why. Not like there aren't enough babies coming to satisfy him. And it's a moot point, of course. He will just have to be satisfied with Maurice and the chickens as our babies and I think he really is.

Life is so funny. It all seems to go so fast which, I suppose, is the very best reason of all to be mindful. To take each moment as separately as possible. To notice it, to be in it. An easier thing to do when healing is taking place, when life, perforce, slows down.

I am just incredibly grateful to be able to be here, to be able to witness Lis come back into bloom. She is a rose and what could be more beautiful than to be able to experience that sort of sweetness and beauty?

Well, that's it from me now.