God Only Know Where I'd Be Without Them 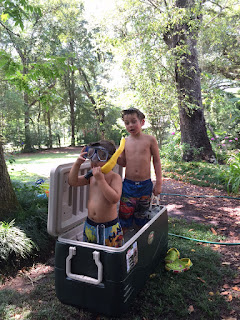 I had thought I might take the boys to the river to swim today but our time got crunched by various things and so they swam in an ice chest in the yard.
It's a big ice chest. They liked it.
Owen had been digging in the yard for treasure and so he was hot and Gibson had been playing in a sprinkler so he was dirty and the ice chest was just the thing. Owen did complain that his mask wouldn't stay on properly.
"Honey," I told him. "You don't really need a mask to see to the bottom of the ice chest."
He admitted that this was true.

After the ice chest bathing they wanted a hot shower. Owen washed his own hair and then put in conditioner. After he got out, he blew dry his own hair. He asked me to help him get a little piece that was sticking out to lay down so we went and got some of Boppy's long-unused hair gel. That worked. He also allowed as how he might like some deodorant so he applied a bit of Boppy's Speed Stick too. He looked AND smelled good.
Also, he asked me not to mess up his hair when I hugged him. I'd say that this behavior is a bit premature but I remember my brother trying like crazy to get his hair to stick up in a crew cut with butch wax when he was only a few years older than Owen is now. 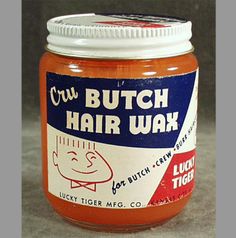 Gibson's post-shower grooming consisted of refusing to put his clothes on.
"I go booty-naked," he said.
"Fine with me," I told him.

After the grooming session, Owen wanted to wash his treasures. Gibson was already washing his duckies and the little dog and the little cat that he plays with in the kitchen sink so Owen used the bathroom sink. He has a lot of treasures, all things he's found in this yard. Here's what they look like after he washed them. 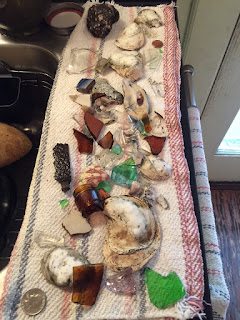 Here's what the sink looked like after he washed them. 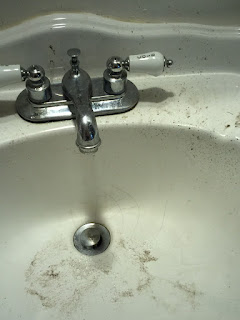 Oh well. It was easily cleaned.

As were the towels and bathroom rug and the ice chest and so forth. Everything's tidied up now and I've gathered the eggs and picked the cherry tomatoes and one lone cucumber and a few green beans. Miss Trixie has been outside again today and I swear- she looks fine. I don't know what's going on with that old bird.

I don't know what's going on with Maurice either but her night time habits have GOT to change. I was up with that cat four goddamned times last night. She wants in so she bats at the window above my head. The door to our room is swollen and hard to open and very noisy so I tiptoe through our room, through the mudroom, through Mr. Moon's bathroom, through our old bedroom and through my bathroom to get to another door that leads to that same porch to let her in.
Then she wants more food. Then she wants to scratch on the corner of the bed which somehow rocks the entire mattress even though it weighs about a thousand pounds. And is loud. And she accompanies that with meowing. Then she wants to cuddle.
For a minute.
Then she wants to go out.
Repeat.
Mr. Moon got up with her at least once too. When he came back to bed I said, "Did you kill her?"
"No. I let her out. That's what she wanted."

I knew this was going to happen. I knew it from day one. And yet- I allowed it to happen. She showed up and meowed her little orange ass into our house, our hearts, our bed.
Well, at least she's not a dog.
And every time she goes and sits on my husband's lap while he's sitting in his chair he says, "Look at this." We feel honored if she so much as sits on us!
We can't help it. It's the way our wiring has developed in our relationship with these tiny big cats.
And occasionally she does eat a roach.

And that's about it for now. Before the boys left Owen asked me if he still looked handsome. I told him that he certainly did.
"Well, take a picture," he commanded me. 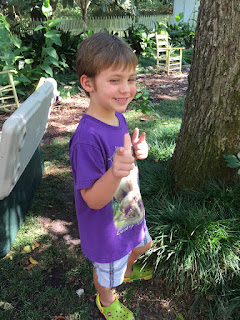 Little boys. Naked and dressed. Groomed and wild. Digging in the dirt and washing duckies in the sink. I need you and I love you.

Big ones and small ones.

They are my heart.