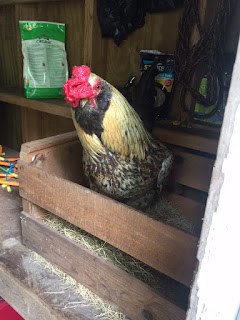 I love that picture. Mick was in the box in the pump house where occasionally a hen lays an egg. He was doing that thing that Elvis used to do which was to find a place he deemed a suitable laying location, trampled it all down and called it to the hens' attention.
He did that to one of the big potted ferns on the front porch and I found eggs in that thing for months.
This is another rooster behavior that I did not know about until I had roosters of my own. There is a popular saying which is that "roosters do all the crowing but the hen delivers the goods."
Well, on the face of it that is true but a good rooster does far more than crow. He protects the hens as best he can with warning crows, with spurs, with his beak. He keeps watch as they scratch, looking out for potential threats. He goes and collects them to escort them back to the flock after they've laid. If he hears a hen calling from anywhere, he runs to her. He calls to them at night to round them up. He tid-bits, offering them food before he eats it. He calls to them if he finds a little stash of good food. And of course he does a lot of what I call "fertilizing" when I am talking to Owen. Which the hens may not enjoy that much but which does provide for another generation if the hen is a brooder.

Okay. Rooster-behavior class over but in other chicken news, when I was cleaning out the hen house, Miss Trixie was still on the roost and not happy at being disturbed so I picked her up and put her in the coop and the next thing I knew she was eating and drinking and then Mick came to join her and led her out to the yard and they contentedly pecked at corn together. I guess she's with the flock again because she's not in the coop or hen house.

And I tried to work in the garden today. I'd go out and work for about thirty minutes and then realize I was about to die and come back inside. I repeated this about three times. I got a little weeding done and picked some more peas. God but they're gorgeous. 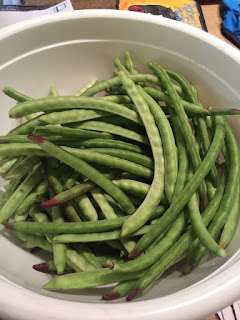 Those big fat pods, those protein-rich delicious peas inside, slick and round and just waiting to be freed and cooked and eaten. Thank you, sweet baby Jesus for the peas and the beans and I'll bet you anything that the women of old said the same prayer of gratitude and added another one for giving them a good excuse to sit on the porch with sisters or moms or aunties or friends to shell and chat.

When I took the trash I got to talk to the man who works there on weekends again. He's the man who used to have a forty-acre "garden" but now he only messes with ten acres.
Holy shit!
I have no idea how old he is but his mama is 95. He's at least my age. Maybe older. He has the ebony skin that makes it hard for me to guess but his eyebrows and hair carry the same gray and white as mine. We talked some today again. I love talking to him. We started out about the heat and how soft we've all become due to air-conditioning but how we don't want to give it up, NO SIR! He said, "When you and I was coming up, ain't no one had air conditioning."
We talked about that for awhile and then he told me that he grew up with not only no AC but no electricity or indoor plumbing. "We couldn't even take a bath!" he said. His mama cooked on a wood stove and the house "kept the heat all day." He told me, "We didn't even have real windows, just wooden things we could pull to close or open."
MY GOD!
And yet, his daddy supported them all. He worked a money job and then came home and farmed his acres and was the farmer for the whole community and raised cows and hogs and chickens. And that he and his siblings got off school, came home and were given a hoe to go work.
"We helped with the cows and the hogs too," he said.
"You never got to play!" I said.
"Nah. We didn't play much. We worked."
And then he told me that on Saturdays, sometimes his daddy would take off of working and load up all the kids in their truck (and his daddy was so proud of that truck because most people didn't even have cars) and they'd go to the river and fish and cook them in a little grease in a big iron pot and that was fun. He smiled when he told me that story and I could just see it.
His daddy passed away a few years ago, was ninety-something.
"Hard work doesn't kill you, does it?"
"Nope," he said. "It doesn't."
This man volunteers, coaches kids' sports teams, farms, I don't even know what all. But I know I love to talk to him, listening to the stories of his life, and we both stood there in the sun with the garbage all around us, sweat pouring off both of us and I was in no hurry to get back into my air conditioned car to come home.

But finally I did and I've taken a shower and gotten the clothes off the line and put away and Mr. Moon spent all day carpentering me a new drawer and he finally got it in and it's a thing of beauty. The sky is darkening, I hear thunder off to the south. The radar does not look ominous but I don't trust that shit. The air is as still as a dead man's finger, heavy with damp and portent.

It's been a good day here in Lloyd and although I am naught but a pretend farmer and a desultory animal tender, I have done my tiny bit today and feel the better for it. I made an incredibly delicious chicken pot pie last night and we're going to have leftovers tonight. Honey, I put crust on the bottom AND the top of that thing. Good pastry, rolled out and pretty. Every vegetable I had in the house is in that pie and the chicken was some that Mr. Moon grilled on Friday night.

I love my life.
I wouldn't trade it for anyone's.

Hell. I even have a dishwasher. And no, the thrill is not gone. Not in the least.