In Which Things Are Ripening 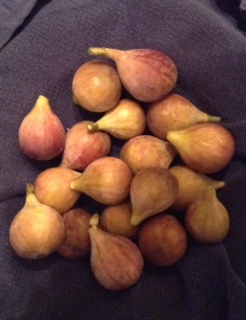 Oh, how good it was to see those boys and their mama too! Gibson ran in the house and hugged and hugged me and Owen followed suit. "I have missed you so much!" I told them. "I miss you every day," said Owen. We did all the fun stuff. Owen climbed the fig tree and look what he found! Ripe figs! I can't believe it. We picked all we could reach and no, that's not even enough for a pint of preserves but perhaps, if I let them ripen as we go and put them in the refrigerator, there will be. Or perhaps we shall eat them baked with a bit of goat cheese and honey. I don't know. But aren't they...mmmmm?
Just so pretty.

We walked down to Papa Jay's where we discovered that Papa Jay's mama has moved her canaries into the store. There were three cages of the birds, yellows and rose-colored. They didn't sing while we were there but we loved watching them for awhile while Papa Jay made sandwiches for some other customers. We bought our Teddy Grahams and Doritos and a grape soda and a Monticello newspaper and as we were checking out, a man came in the store. He appeared to be a bit...uh, possibly inebriated. But the sort of inebriated which may represent his everyday reality.
"You enjoying the sidewalks?" he growled.
"Yes, yes we are!" I said.
"I don't like 'em!" he said.
"Why?" I asked.
"I have lived in Lloyd my entire life and those sidewalks are NOT Lloyd!"
"Oh," I said. "Well."

I mean, what can you say? Not much. Not one of Lloyd's beautiful trees have been destroyed by the new sidewalks and frankly, I think they are a nice thing. Walking is so much easier on this one-mile stretch of our road from the County Line to the traffic light. Less chance of picking up a tick or chiggers. Less chance of stepping on a snake.
But. Each to his or her own.

Mr. Moon came home and got packed for auction and I made his snack bag and his coffee drink and his popcorn and the boys hugged and loved on him and when Gibson ran through the house he tripped on the threshold into the dining room and when I went to pick him up he said, "I want Boppy!" and so I delivered him to his grandfather and soon enough, he was good to go again.

It was, in short, a delicious visit and I hope to see them a lot more this week, maybe doing fun stuff and maybe going to Japanica! which I can't seem to go more than two weeks without craving.

And that was my day. My kitchen is a complete disaster, still. After Mr. Moon gets this dishwasher in for good I'm going to have to rearrange the entire kitchen to make up for the loss of 2/3's of one half of my lower cabinets and a junk drawer.
Yikes!
But it's something that needs to be done and I'm looking forward to doing it. Lis's kitchen inspired me. She has very limited space in hers and yet, manages to fit everything in. She suggested today when we spoke on the phone that I move the bar and glassware stuff to the library and I think that's an excellent idea. Of course, this is going to entail finding some sort of cabinet for the glassware.
I really hadn't considered that I had glassware until Lis pointed it out. It's such a mixture of unmatched pieces.

Oh well. It's certainly not a big deal but I am looking forward to throwing some things out or giving them away.

I went out and picked from the garden after the boys left with their papa. 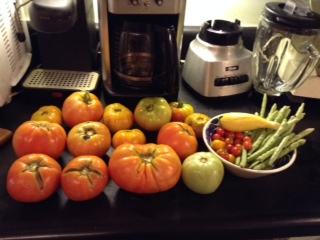 That tomato in the middle in the front must weigh a pound. More crowder peas, a squash, more cherry tomatoes. The okra is growing and I'm pretty sure it will start blooming and then fruiting in a few days, just as I am fairly sure that the young hens, Elvira and Lisa Marie will start laying soon. It is the season of fecundity.
And let me just add that I read this article about a new roach in Florida the other day. And sure as shit, I saw one in the garden today when I was picking the crowder peas. No mistake and I would bet my life on it.
Just fucking great. Nothing Florida needs more than a new roach species.

It has been a good day. I think for supper I may eat something with tomatoes in it. If lycopene is good for you, we are going to live forever.