Saved By The Boys 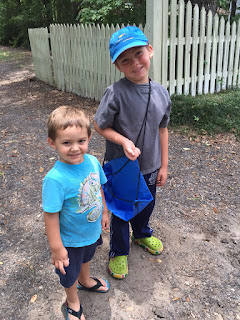 These two fine boys and I had a great time this afternoon. We went down to Papa Jay's and got our snack purchases and stopped by the Post Office to collect the mail. Then, as per usual, we sat on the swing on the porch and they enjoyed their goodies and then I showed them the bee tree.
"You should get one of those things for bees," Owen told me.
"A hive?"
"Yeah, a hive."
"Good idea. Meanwhile, the bees seem pretty happy up there."
Not that I would know a happy bee from an unhappy bee. I wonder if honey's just going to start dripping out of the tree. That would be interesting.
Calling all bears. Calling all bears.
When Boppy got home, I was in the middle of getting a make-over for the ball. I got MADE OVER, y'all. 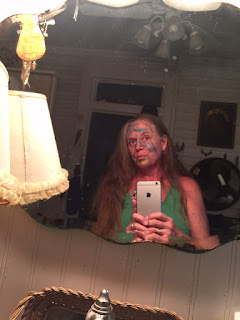 I think it's funny how Mr. Moon tries to get them to apply the make-up in the correct places and in the correct amounts while I just let them have at it. After I was all done, Owen presented me to his grandfather. I was the Egyptian Queen. He even made me put on a dress and one blue earring and one red earring. Then he showed me around my royal palace and my royal yard and showed me my royal bird feeder, my royal birdbath, my royal chickens and my royal outdoor table.
It was awesome.
After awhile, Boppy told me that it would be okay with him if I washed off my royal make-up. And so I did and took off my royal dress and put on my royal cargo shorts. But I'm still the queen. Make no mistake about that.

Here's what I found when I opened Mr. Moon's lunchbox to clean it out: 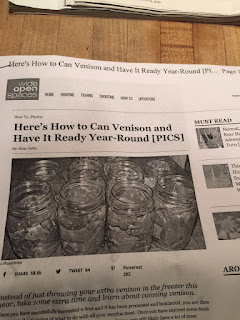 Here's another picture. Not of canned venison. 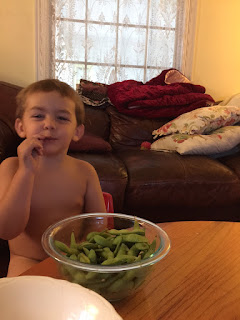 A naked boy enjoying some edamame beans. He also ate an egg I cooked for him and some chips. He was happy. He got a baby doll this afternoon and put her under the covers in my bed and he cuddled her and said, "She sound asleep." My heart broke with the sweetness.
Then he wanted another baby doll. How precious! I thought. He's getting ready for the baby!
"Here you go," I told him, handing him the baby doll so very tenderly, at which point he grabbed up the other doll and made them start fighting, bashing their baby doll bodies together. Finally, one of the babies must have been the victor because he held it up in the air and said, "Baby doll saves the day!"

Dear god I love these children. Their skin is like the purest thing on earth and their minds are never still and they pretend and they hug and they kiss and they cuddle and they do projects and they tell me what to do and sometimes I do it.
Okay. Mostly.
Mostly I do it.
We talk about everything from bugs to bees to music to the new sidewalks coming to dinosaurs to monsters to snakes to gardens to families. I listen because I'm the grandmother and I have the time and I don't have all the responsibilities. I answer all the questions. I let them eat chips in the living room and if someone happens to pee on the rug, I just say, "Move over and let me clean it up."

It's a joy, this grandmother thing. It opens my heart in ways that I never knew possible.

All right. Their dad has collected them. Time for a Friday night martini and then I'm going to cook some red snapper. Or red grouper. I'm not sure which. It'll be good, no matter what it is.

I believe I shall call it Fish Royale.

When they were leaving, Owen told me that actually, he'd laid those eggs in the basket on the counter.
"Do I need to sit on them to hatch them?" I asked.
"Yes," he said, very gravely. "And when they hatch, they will be little Owens. So call me up and tell me."
"I will," I said.

And you can be sure I will.