The good news is that Lily does NOT have a blood clot or a deep-vein thrombosis, which is what we were worried about.
The bad news is that she does have cellulitis. Which they are going to treat with amoxicillin. I hope that works because she is, as we all know, pregnant. Gibson seems to keep a staph infection going in his nose which I hear is quite common and who knows?
I don't know.
I do know that the symptoms for DVT and cellulitis are much the same- swelling, redness, heat. So it was good that she went and got it looked at because cellulitis can be potentially dangerous if left untreated. She was in the ER for hours but it could have been worse. Her vascular doctor does not work on Fridays and her Primary had no extra slots. Which is why she ended up in the ER but at least they could do an ultra-sound there on the affected area so that is probably where she should have been anyway.

Gibson and I spent a pleasant day playing games which means everything from doing puzzles to coloring. We read a Thomas The Tank Engine book more than once. When I left, I hugged and kissed him and said, "I love you, Gibson!"
"I love you, baby!" he yelled back.
Another thing he said to me today was, "I want to tell you a question."
I can't even remember what it was but it made me laugh.

Boppy/Boppa (the name seems to be in transition) reports that Owen is being the best, sweetest boy imaginable. That he is getting along with all of the other kids very nicely. That he is being the best boy that any grandfather could ask for.
I asked him how Owen was doing with the oldest girl who is about his same age.
"Like bread-and-butter," Mr. Moon reported. "Like bread-and-butter."
I'm mighty proud of that boy. And Boppy. Who is the best grandfather any boy could ask for.

And so it goes. I didn't get home until after six-thirty. I stopped by the grocery store and picked up some fancy pasta and will make a "garden medley" sauce to go with it from these lovelies which I picked a few minutes ago. 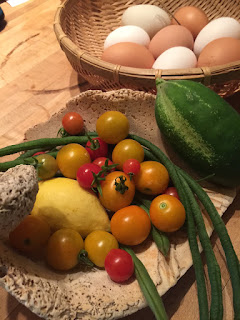 Not the eggs. Just the vegetables.

I noted that the first zinnia which is not pink or lavender has bloomed. 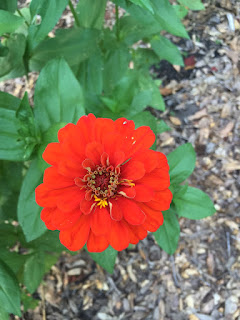 Bright enough? It's so funny how every one of the volunteers, seeded from last year's plantings are of the pink and lavender variety. I can't wait to get more colors from this year's planting. A red one is about to open. Liz told me yesterday that her granny grew enough food in her garden to feed a family of five year-round. She had a canning shed. But she always planted a row of zinnias which she called, "my purties." And she cut them and took them to decorate the church on Sundays.
I have never decorated a church with my zinnias but I've been decorating my house with them for almost forty years.

Speaking of flowers, here's a picture I took on my walk this morning of a swamp mallow. 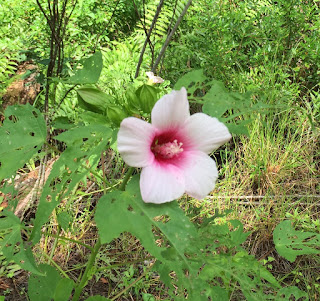 Related to the hibiscus, Rose of Sharon, okra, and Confederate rose.

It's been a day of ups and downs but all has turned out well. Last night little red chick did not show up and this morning when I let the chickens into the coop from the henhouse she was still nowhere to be found. I had given her up for dead. But when I let the birds out from the coop she suddenly was just there, out of nowhere, and I am so glad.

I keep thinking about the fact that I could have been in Orlando tonight. I bet the energy there is intense and I almost feel as if I can feel it from here. But...I had a job to do today. I needed to stay with that boy while his mama went to the Emergency Room and Jason got off work to go with her but if I hadn't been here, he would have had to have taken care of Gibson which would have left Lily all alone and NO ONE needs to be in the ER by themselves. You simply cannot take a three-year old to that place for the hours and hours it requires unless it is absolutely necessary.

I wrote Hank today and said, "Everything's gone to hell since you left. You need to come HOME!"

He will be home tomorrow as will my husband and Owen. I sort of hate the word "synergy" but perhaps there is something to the theory. Again- I don't know.

I'm going to go cook some vegetables. I know how to do that.

Did you know about this?

One more reason to live. Thanks, Bill. And Bruce too, whom I have had a sweet and tender crush on since Moonlighting.
I might actually have to go to the movies.
Posted by Ms. Moon at 8:15 PM