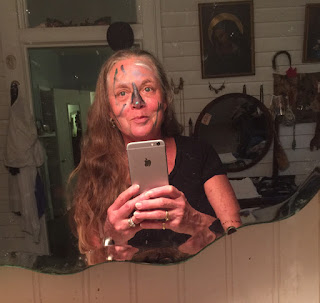 In celebration of today's historic decision by the Supreme Court, the boys gave me a colorful make-over.
Actually, they just gave me a make-over. I thought about talking to Owen about what happened today but then I thought, fuck. Just let him grow up in a world in which marriage is marriage. Period, the end. The day Lily told me she was pregnant with him was Obama's first inauguration day and it did not escape me that my grandson was going to grow up in a world in which it was taken for granted that our president could be a man with African heritage and no big deal.
Sure, I want my grandchildren to know their history. But I want them to be able to look at it as history and to know that we have grown and changed and that we are, as Obama said today, the UNITED States of America.

My heart has overflowed today in so many ways. It still is. Overflowing.

I was holding Gibson in the rocking chair this afternoon and telling him about how I used to hold him when he was a baby and I adjusted him in my lap and cradled him and said, "Like this." He closed his eyes and smiled but when I started singing Rock-a-bye Baby he told me to stop.
And then I told Owen that I'd held him the same way when he was a baby and how I'd told him stories about all the things we would do when he got bigger.
"Do you want me to hold you like that again?" I asked him.
"No," he said.
And then he changed his mind.
"Yes."
And so I did, his long legs sticking out on one end, his head and torso sticking out on the other and we laughed and laughed.

Gibson keeps telling me that he is going to get big.
I tell him that yes, I know. And that I am so proud of him.
He peed in the toilet today EVERY time and told me when he had to go. Owen just peed off the porch which I probably shouldn't allow but hell...why not?

My babies.
My god.

Owen climbed the fig tree. He picked cherry tomatoes for his brother. We watched the train go by. We fed the chickens.

All of which he and his brother will grow up just accepting as reality.

Damn. It's been a real good day.
I hope it has been for you as well.