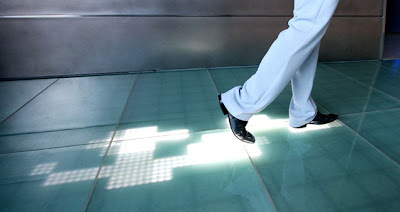 Here's another thought I have about Michael Jackson:
The ridiculously gifted and amazing song-writer/performer he was back when he was young was one person.

And for some reason that we'll never understand, that person disappeared and was replaced by someone else. Someone who wasn't quite male, quite black, quite as gifted. He shape-shifted.
Not by spells or magic but with knives and scalpels and transplanted pieces of plastic.

The whole world watched as this happened. As his face melted and was shaped into something neither whole nor happy nor human. I can't say this enough- he was not quite human anymore. And that part of him that was human was so deep inside of him, so lost, that we never saw it again. We never heard it again. He became a persecuted soul who, if he had not been Michael Jackson, would have been living not in the most beautiful hotels and houses in the world, but in a prison or a psychiatric ward.

And that Michael, I hope, was released yesterday.

I keep thinking about his children. Prince Michael? Blanket? What are their names? I think of them as being like those changelings, left in the nests of strange birds, fairy-children hidden among the children of the people. How will they exist now? They had no mothers and the not-human being who was their father is gone. The veils from their faces have been ripped off and I am not sure their eyes can stand the light of the real day.
I cannot quit thinking about the children, those changelings, those strange little people who have to live in this world now.

I dreamed last night that I was in a car that had gone off a cliff and I knew I was going to die. Instead of being frightened, I relaxed completely as the car (and it was dark green and the seats were velvet) soared through the air and I thought to myself, here we go. I wonder what it will be like, and I was so curious and not afraid at all.

I hope it was like that for Michael Jackson. I hope he soared and was not afraid.
Posted by Ms. Moon at 8:36 AM