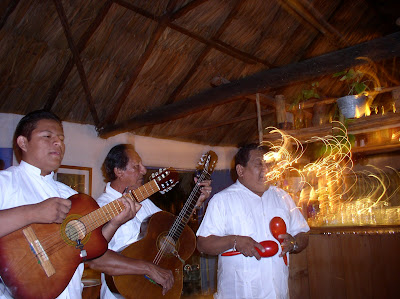 So anyway, be prepared for some heat-addled crazy vacation-planning here at blessourhearts and I'll try to throw the chickens in there at some point for your amusement and edification.
And the bottom line is this: in just a few weeks, I'll be sitting at a table at Plaza Leza, ordering a tiny, deadly margarita and I'll be wearing a white dress and the ceiling fans will be spinning above me and the children of Cozumel will be walking by, looking like tiny adults and maybe the musicians will be out, men I've been listening to for twenty-one years, and I'll ask them to play the Cozumel song and they will probably inwardly groan and then play it as if they'd never played it before and I'll listen to the words about the beautiful island of Cozumel where I've left my heart. I will cry and then I'll order some chilis rellanos because that's what I always do my first night and Mr. Moon and I will walk around the plaza, hand-in-hand, noticing the changes, delighting at the things we recognize and the store vendors will try to get us into their shops and we'll say, "No, gracious."
And it will be hot. And the sea will be crashing into the sea wall and there will be a breeze because there is always a breeze in Cozumel and there will be so many smiles.
And wherever it is that we go to lay our heads, it will be fine. And however much it has cost us to get there and have a place to stay, it will have been worth it.
Because when I am in Cozumel, I am the Queen of Mr. Moon's heart. I am Maria Luna and he is Sr. Luna and he is as tall as the moon and the Mayans laugh at him softly behind their hands because he stretches up to the sky and they are small people, brown and beautiful and their ancestors invented zero and worshiped this island and they worship it too.
As do I.
I can't believe I'm going. I'm thinking this is all a fever-addled dream.
But Mr. Moon says we are, so I think we are. He never lies to me, that man.
I can't wait to hold his hand and walk through the night-time streets of Cozumel, wearing white and crying softly because I am there, really there, and I never thought I would be again.
Posted by Ms. Moon at 6:24 PM