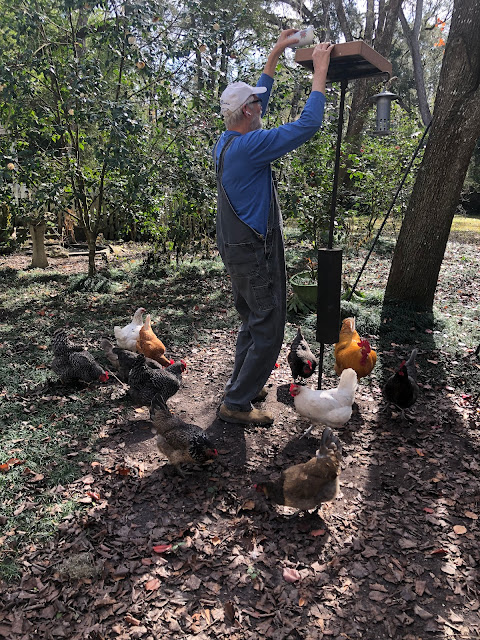 The chickens come running when Mr. Moon walks out of the back porch with the bird seeds in his hand. They know they will get the old seed that he knocks off before he puts the new seeds in. This is one of the high points of their lives. They chatter and bawk and Liberace calls his tid-bitting song and all is happiness for a few moments. It makes me so happy to see them all so excited, to hear them talking about their great joy.

Y'all. The craziest thing happened to me last night. I was scrolling through Facebook, as one does, and I'd been tagged in a post from a group called Sebastian, Florida Historical Group. The person who tagged me is one of our landlords when we go down to Roseland. He and his husband own the little pool house on the river where I am so happy. He said in his comment that I might be interested in joining the group. He knows how deeply I love Roseland, how many memories I have of my time there. Roseland and the people who lived there when I was a child have become almost mythical in my mind. Totemic.
Most of you know this as I have written about Roseland and the river and some of the people I knew there many times over the years and have followed me there, in this strange and virtual world, as I've gone back and visited. One of the earliest posts I ever wrote about a person I remember from Roseland was in 2009 and you can find it HERE.
It's a story about a man named Chester who lived in Roseland when we moved there in 1959. The first lines of that post go like this:
When I was a small child and lived in Roseland I saw Jesus Christ driving a tractor down the road one day, followed by children and dogs.

And that memory of the man whom I learned was not Jesus Christ but a man named Chester, has stuck with me ever since- over sixty years ago and I can still see the scene in my head, clear as day. Chester was practically a legend in his own time in Roseland. He was, to put it mildly, eccentric. He lived with his dogs and the stories about him abounded. Many of them seemed improbable. And a few years after we moved to Roseland, Chester disappeared and people said that he had moved to Brazil which seemed as improbable as anything else said about him and later, a report came that he had died down there, from malnutrition which was not out of the realm of belief in that all he ever seemed to eat was canned food, never warmed up, cokes, and peanuts, all of which he shared with his dogs. Bite for bite. Sip for sip. This is true because I witnessed it.
Anyway, I have wondered about Chester all of my life. I have often thought that perhaps I was the only person in the world who remembered him and maybe, in fact, he'd been a dream.
He was not.
The first post on that Facebook group, the very first one I read, was about Chester.
There were even pictures. Here is what the man who I thought was Jesus Christ looked like. 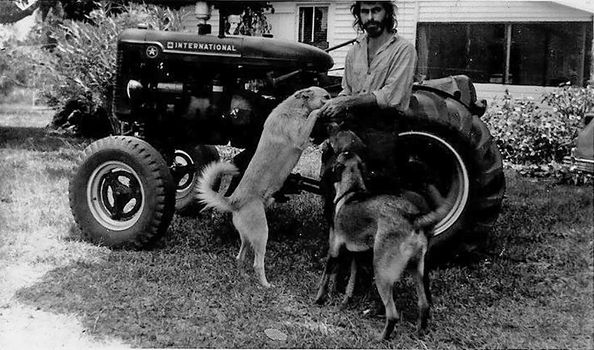 Dark-haired, long hair, beard, dogs, tractor.
Chester.
You could have knocked me over with a feather.
There was a long, long post about him, written by a man who had known Chester when he (the author) was a child and if what he says is true, Chester was as different and strange and eccentric and brilliant as he was rumored to be.
Not only that, he did indeed move to Brazil. He cut his hair and beard, went to Miami several times to get a passport and a visa, and here is a copy of that visa. 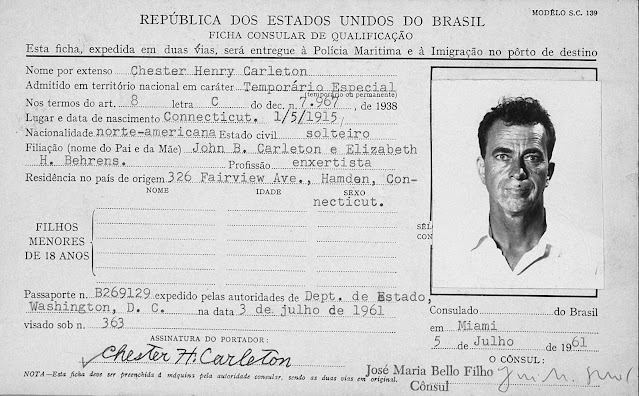 I am still boggling.
After I had moved on, finally, from the post about Chester, I continued to read on and my god! I found names of people I'd known, whether in posts or comments, pictures of places I knew as a child and know now. Stories of people who were Roseland pioneers, including a woman I knew as "Aunt Katie" who seemed a hundred years old when I met her and listened to her stories about the Indians who paddled their canoes past her house on the river when she was a little child.
My mind is blown. And frankly, I am amazed at how much I remember and how much of it is accurate.
Do you remember me talking about Joy's store where we would go and buy Popsicles and bologna? Turns out her name was spelled Joie and she, too, was one of the Roseland's early residents. Here's a picture of her in her store. It is exactly as I remember it. 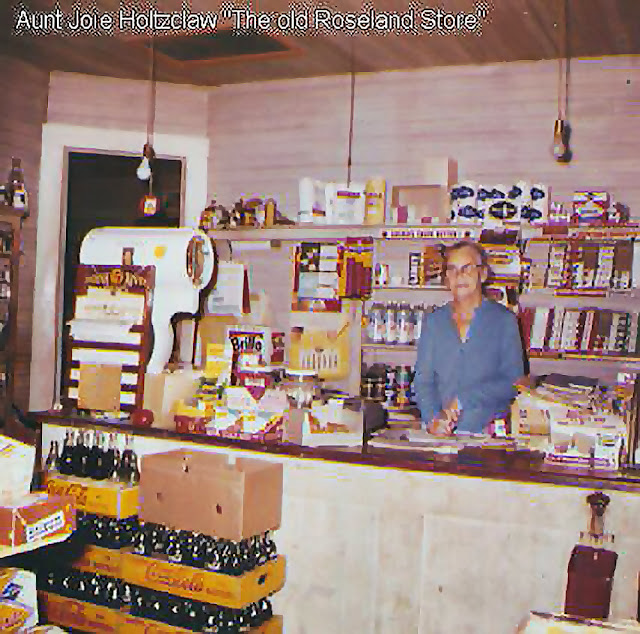 Do you see that doorway in the background? That is the entrance to her and her husband Ralph's home. They did indeed live in the back of the store. I dream about Joie and that store frequently.
As I said, totemic.
Anyway, I have barely scratched the surface of what is to be found in this rich cache of a history which is mine as much as it is anyone else's if that can be based on memory and the intensity and experience of the few years I lived there. I feel as if I have finally found the pirate's treasure chest that I always knew was buried somewhere in the boggy mud of the Sebastian River bank and that it is filled with shining jewels and pearls and pieces of eight, silver and gold.
One thing I have truly realized is that many, many eccentric characters were drawn to live in Roseland which I had always had a sense of before I even had the language to define that.
Perhaps that is part of why I loved it so much.
There will be more, trust me. I have even made contact with a man whom I remember as teen-aged boy who I know will have a memory of Fossil Island because his father took us there. I have never been able to find any information about that little dredge island where you could literally stumble over the fossilized teeth and bones of mammoths.

But for now, that's enough.
I had a good day in town. Jessie and I got together for lunch and then she picked up Levon and we re-met at Costco. 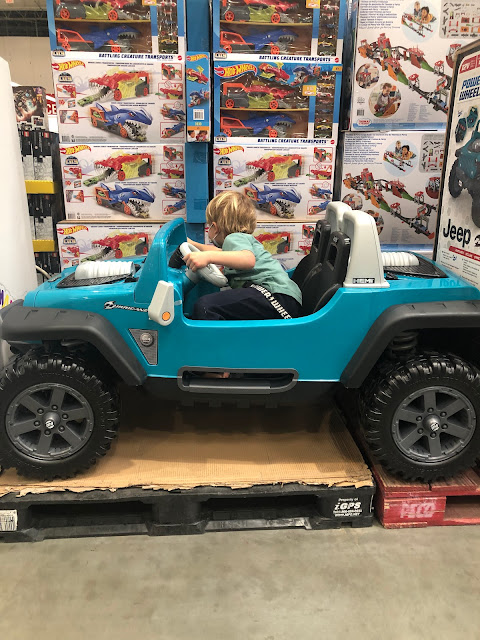 The first thing he did when he got into the car was to put on his seatbelt and then check his rearview mirrors.
Safety first!
And guess what- another picture! This one of...
Well. Can you guess? 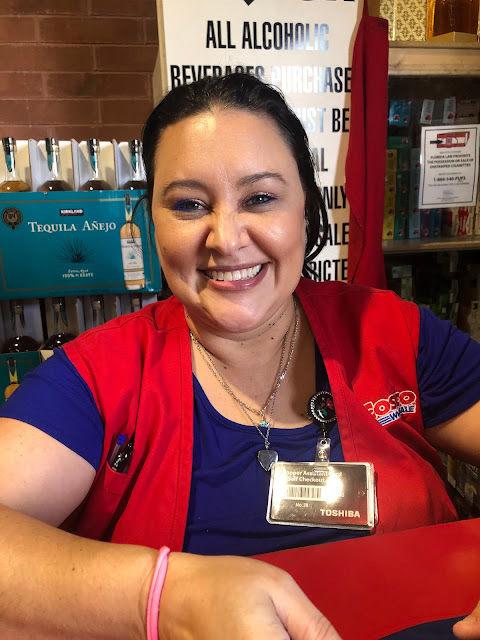 It's Brenda of the beautiful mermaid eyes! Isn't she gorgeous? Yes. She is.

And Rachel got her gallbladder out today! She is fine and resting at home now. I dropped off some food and tulips for her and kissed her and Hank.
It's been a big day.
Off to make dinner. I'm embarrassed to tell you what we're having tonight so I won't.
Love...Ms. Moon