Life Is But A Dream 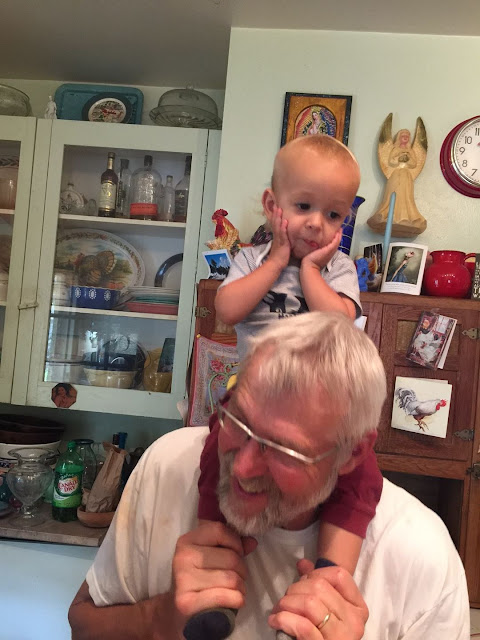 I took zero pictures today so I'm giving you one that came up on my FaceBook memories this morning. That was August and his Bop, five years ago. I can hardly stand to look at it for fear that the cuteness will kill me dead. Was August ever, really, that darling little almost-pudgy bebe?
Yes, yes he was.

Another dreary-weather day here. And I did very little again. I just can't get excited about doing things when it's this gray. I actually watched a movie- "The Tender Bar" and did some crocheting. I really enjoyed the movie. I'd read the book sometime back and enjoyed it too and I think the movie did a good job of capturing the spirit of it. I thought the cast was superb and didn't even recognize Ben Affleck for a long while but I thought he did a very fine job. As to the crocheting- well, it could be a potholder or I might just go crazy and turn it into a shawl. Who knows? Remember all that yarn I bought at Wag The Dog a while back? I've still got it and it's still beautiful yarn. Natural fibers, a grand assortment. I wish I was craftswoman enough to do justice to it.

Mr. Moon and Owen got up at 4:30 and hit the woods. They had a great time. Owen did shoot a duck (I won't show you the picture but he looks very proud) and then they went out for a huge breakfast. 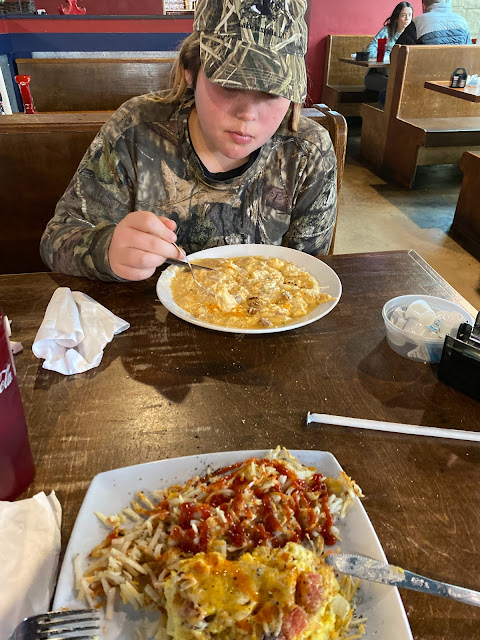 Owen got shrimp and grits which reminds me of when he was just a tiny boy and ate his first fried shrimp in a restaurant. We'd been to the beach and stopped to eat on the way home and he was so tired that he fell asleep over his shrimp but every now and then he'd wake up and eat a few more shrimp because he loved them so.
He ate a lot of chicken and dumplings last night and salad too. And then his purple cow. He's so grown up. After he took his shower and I was kissing him good night, I asked him with seeming seriousness if he needed me to read him "The Little Red Hen Makes A Pizza" and he said, "No, I think I'm alright. But thanks!"
Bitter sweet.
After my fellas had their breakfast they went to a monster truck thing at the Civic Center that Hank had provided tickets for. He got them through his work place. Have I told you he's working at a print shop? He loves it. He's in his element there. Anyway, he asked Lily if she wanted them for her and the the kids and she did and Boppy went too. 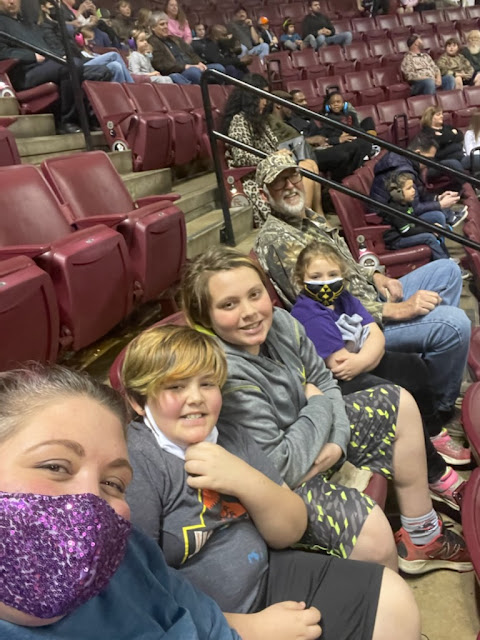 I think they had a good time. Mr. Moon sent me some short clips of monster trucks doing monster things and I texted back, "Why do people do that?" He responded, "I do not know."
So much about life today that I just don't understand but I'd probably feel the same way if I was living in Tudor England.
I finally posted today on the FaceBook group about Sebastian and Roseland to ask if anyone knew anything about Fossil Island and the man whom I remember as a teenager (we are now FB friends) responded. I knew he'd know and he did. He remembered exactly where the island was and had also collected fossils there. Mammoth molars and other things. He said that it had been a relatively newly pumped up spoil island and that there were all sorts of animal fossils there, not just mammoths. I asked him if he thought the island was still there and he said he didn't think so as it never treed over and was a very low island. That it had probably become perhaps a sandbar and everything on it would be covered in algae now, as well as barnacles and oysters. So it's no wonder that people don't know about it. A lot of other people responded to the post, although none had actually known about that island in particular. Turns out that there are quite a few fossils found in that entire area.
I'm telling you- that was an amazing place to grow up in.
I woke up this morning from a dream which featured my usual themes- fear of abandonment, fear of losing a child, fear of getting lost in general, but also new ones such as intense dislike of being in crowds and of shopping as a mainly recreational activity. Also, the setting was completely new. It's as if my brain has been building a circus funhouse of a huge, underground shopping center with scary clowns and bizarre monsters and unveiled it for me with great and colorful ceremony.
I did not like it and if there is anyway for me to strike that set and go back to my sort-of haunted house, I'd really like that. I've never been any good at lucid dreaming and I suppose I should read up on the subject. I can, sometimes, let myself know in a dream that I am, in fact, dreaming but that doesn't seem to stop the action or the attached emotions.
Somehow none of this has affected my great joy at getting into my bed every night. I am always a little wary of what may come to me as I sleep, but I accept that as part of the great relief and comfort of letting everything go for the hours I'm in bed, wrapped in covers and snuggled into pillows with my husband and sometimes a cat with me. Those moments between awakeness and sleep with their spacey thought and image drifts are always a pleasure for me.
Well. Still miles to go before I sleep. As Robert Frost said. Or at least hours.
I better get on with what needs to be done before that sweet time arrives.
Love...Ms. Moon
Posted by Ms. Moon at 6:24 PM