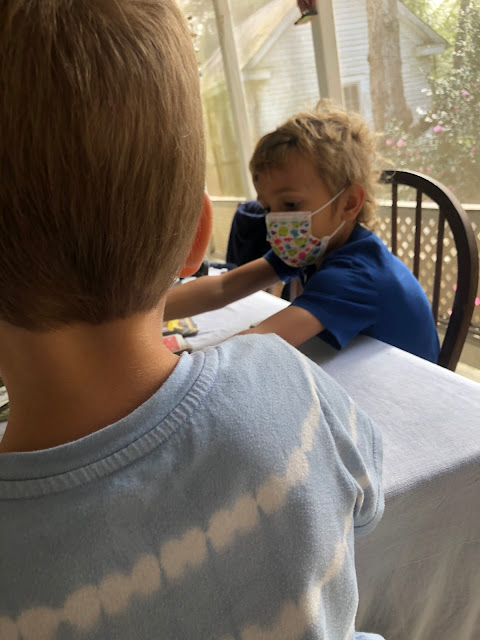 Our family has all had one illness or another lately. May and Michael have been suffering from something that is either covid or the flu- not a cold. Body aches, fever, congestion, extreme fatigue. They got tested yesterday and are waiting on results. They'd done rapid tests and gotten negative results but it seems that tests are not picking up some of the newer varieties of the damn virus. How May and Michael could get sick is a mystery. He works from home and never goes anywhere and when May's at work she wears an N95 mask with a cloth mask firmly affixed over that and she does not take those suckers off. Of course she works in the "wellness" section of a coop where people come in seeking natural remedies because they don't believe in things like vaccinations and they certainly don't believe in masks and they want to talk and talk and talk. Closely. To her.
Jessie and her kids have come down with something again. Upper respiratory. They, too, have been tested and are awaiting results.
Hank and Rachel seem to be covid-free but Rachel's had some surgery-related things going on and she is getting better.
Mr. Moon and I are okay, for the moment, at least, if you don't count his extreme reaction to the medication they gave him before his endoscopy. I don't think he's back up to 100% yet. I'm fine physically but have been so damn emotional today. I suppose I've been holding a lot inside me, worrying about my family which is what I do best, of course.
Worrying and feeling guilty. Those are my super powers.
And of course there's Putin's attack on the Ukraine which I do not begin to understand but which feels more than ominous. They have reportedly seized Chernobyl. What the fuck does anyone want Chernobyl for? I cannot believe that in 2022 anyone truly believes that war is the answer to anything but madmen always will.
And right here at home in good old Florida where we have a governor named Rich DeSanctified, we're trying to stuff LGBTQ+ rights, education, safety, and health back into a black, airless closet with a lock on it. And let's not even talk about the new voting laws and restrictions on abortion.

Yeah. It's all a little much, I guess. Despair and existential angst are probably a completely normal reaction to what's going on in the world.

But this morning I did get to briefly see Jessie and the boys and Jessie's best friend since forever who is visiting from Germany where she lives and works now. It was so, so good to see them all. Melissa, the friend, feels like one of my babies and always will. One of their high school friends is getting married this weekend and she wanted Jessie and Melissa's old band, The Cicada Ladies, to play at the reception and so...the band is getting back together. This makes me very happy.
They were only here for a short while. Jessie's car needs its AC fixed and she took it to the shop right down the block where friends of Mr. Moon's work (Lloyd has a repair shop, believe it or not) and then she borrowed a car from the vast stable of assorted vehicles around here. As soon as August walked in the house he wanted to play games so we played a quick game of Battle. It was actually the fastest game of Battle I've ever played. Levon was going to be on my team and help me until August started winning big, at which point my helper decided that he was turning his coat and although he would still sit on my lap and flip cards for me, he was helping me to lose so that August would win.
Make sense?
He did a great job of that, too, and he and August won handily.
I was pretty amazed at how well Levon played. Suddenly he knows his numbers and which cards are higher than others. He's four years old! I told Jessie that the boys could play by themselves now if they wanted to.
"Hmmm," she said. "Good to know."

After they left I had to go to town to get stuff because that's my job. I got the stuff we needed at Costco and Publix and picked up a few things for May and Michael and dropped off groceries at their apartment. I got to see them from a reasonable distance, outside and masked and although it wasn't that wasn't entirely satisfying, it was better than nothing.

I stopped at the library on my way home and lucked into getting the newest TC Boyle book. I don't think I've read it but I could be wrong.

Tomorrow I'm going to attend to my potted plants. They are scattered haphazardly over all the porches and in the laundry room and I feel the need to create a little order. When I was at Jessie's house last week her plants all looked so pretty and tidy and thriving and green. Mine all look raggedy and neglected and some of them are frost bit and some of them are chicken-nipped and I feel a huge urge to give them a little love. A little fertilizer probably wouldn't hurt either.

Gibson is spending the night tomorrow and that will be fun. He's such a sweet, smart boy. It is DEFINITELY his turn. All these kids are so different, from how they look to how they think, to how they process things, to how they show affection, to how they learn, to how they talk, to what they want to wear, to what their interests, talents, and inclinations are.
Today May texted me while I was playing cards with the boys and she said, "Tell those boys I love them!"
So I did and then I asked them if they'd like to say anything back to Aunt May.
Levon said to tell her that he loved her too and August? He told me to tell her that he likes her so very much.
That pretty much sums it up.