A Sort Of Story, Once Again Involving Fabuloso. And Fabio, Too! 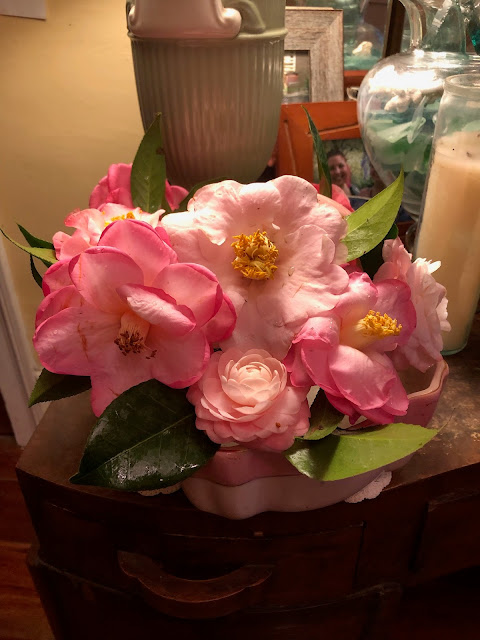 Blogger is accepting my photos again which is nice of them. That's the one I took yesterday.

It's been another where-did-the-day-go day. It turned chilly here again and I'm feeling a little miserable. I don't know if my small miseries have anything to do with the weather or not but it's possible. It's not only chilly but just plain damp and gray, too. It's not terrible but I will tell you that every time I walk past the bed I have a visceral urge to crawl under the covers. Maurice has been sleeping ON the heat vent if that tells you anything.

I worked some on the project that I started yesterday which is cleaning up and doing a little cleaning-out of my old office which is the room that at one time was the detached kitchen of this house. I have a lot of emotions about this room.
Of course.
Because all I am is a big bowl of emotions about everything.
But in this case, there is some reason. When we moved here, the room was flat-out dedicated as my writing room. That was when I was still writing on an iMac. Remember those? The vaguely triangle shaped, candy-colored Macs? Oh, how I loved that thing. And oh, how I loved writing. That was when I had hopes of being published and I've talked about all of that before. I had an agent. She was absolutely sure she'd sell my novel.
Blah, blah, blah.
I wrote a few other novels on that iMac but they never got to the point where I felt they were worthy to send out. And the novel never got published.
But my time of writing in that room was one of the best times of my life. I decorated the room with some of my very favorite things. I put up the funkiest, most whimsical, heart-loved things I owned from pictures of Johnny Weissmuller posing in his teeny loin cloth at Wakulla Springs where he shot some movies to my beloved John and Yoko calendar. A sparkly fishnet with sparkly fishes, mermaids, galore, cards and artwork that May made me. Also mementos of the plays I was in at the Opera House including my marked-up scripts and a life-sized cardboard cut-out of Fabio naked from the waist up that was a prop in the last play I was in.
And over the years I've just stopped using that room. I don't have little kids running around interrupting my train of thought and to tell you the truth- my trains of thoughts rarely arrive at the station anymore so there is that.
But still, it was my room. My room of one's own.
And then when Mr. Moon started working on rebuilding his bathroom he began using that space as a place to put his tools, and the fixtures he took out of the old bathroom. Lumber, glass blocks, paint, etc., etc.
When I tentatively complained, he said in his most common sense way- well, you're not using it.
And no. I wasn't. He was right.
But.
I think most, if not all, of you women out there will understand how I felt. And he just didn't get it.
And even after the bathroom project was finished, the room still had things in it. His things. I couldn't even open the door because it upset me so. It was too much. And then a few months ago, I let him know how this all affected me. What that room meant to me. And he cleaned his things out because really, he is a good man and sometimes I just do not let him know how I really feel about things due to...well. My entire life history, probably.

And still, I did nothing in there.

A few months after the great clean-out, he left his office at the Credit Union where he'd worked for several years but he still needed some office work space for his business. And he said that he'd like to use that room. Because I still wasn't using it. And at first I just got very huffy and said, "Whatever," and so on and so forth and he realized that it wasn't what I wanted at all and so we tossed around ideas and came up with the idea that once we'd moved to the smaller bedroom, he could set up his desk in what is now the guest room again, and use that space. But that requires a lot of heavy furniture moving and it just hasn't happened and finally I said, "You can use my office. It's okay."
And I meant it.
And yesterday I went out there to do a more thorough clean-up and I took my bucket of Fabuloso and vinegar and water and some rags and I cleaned the desk where I always worked (which had been Connie May Fowler's desk and in fact, she and her husband had put that desk in there, a built-in) and I wiped down my neglected mermaids and madonnas and the little shrine where I have some of my Sue-Sue's ashes, and pictures that my kids have drawn and pictures that I've had since I was a kid, and my heart broke and I had forgotten some of these treasures, abandoned them along with my writing dreams.

There's another desk in that room that used to be in the hallway here before we got the piano. It's a big ol' honking wooden thing that we were going to move into the guest room for Mr. Moon to use and I cleaned that out today and polished it up. The drawers held other emotional triggers. Pictures from way back of me and the kids and my handsome husband and also, an entire drawerful of pictures and newspaper articles from Glen's past.
Phew.

In reality, he could definitely use that side of the room for his work and he'd only be there for small bits of time and I could use the other side with the built-in desk if I want to try again. It would be still my room. But here's a thing- the electricity in that room is not working. I think that probably mice or squirrels have chewed through some wires and so that's going to require some work. Also, our router doesn't do squat out there so there's no internet. Which means it's all rather a moot point, doesn't it?

That's what's been going on here and so I am feeling a lot of different things but overall, nothing horrible, just life. I have collards and mustard greens cooking with tomatoes and onions for our supper. It's leftover night but I wanted to bring something fresh to the table. Our pork last night was good but only because of a miracle. My pressure cooker did something I've never had a pressure cooker do which was to lose all the liquid in the pot and the bottom burned horribly. Somehow this did not affect the taste of the meat which was delicious but I thought I might lose the pot. I have decided that I must need a new gasket. God only knows how old the one I've been using is. Way over twenty years. I let the pot soak last night in soapy water and this morning when I put a knife to the black crust, it rather unbelievably  just peeled right up and my pressure cooker looks as good as new.

Here's a picture of that focaccia I made the other night. 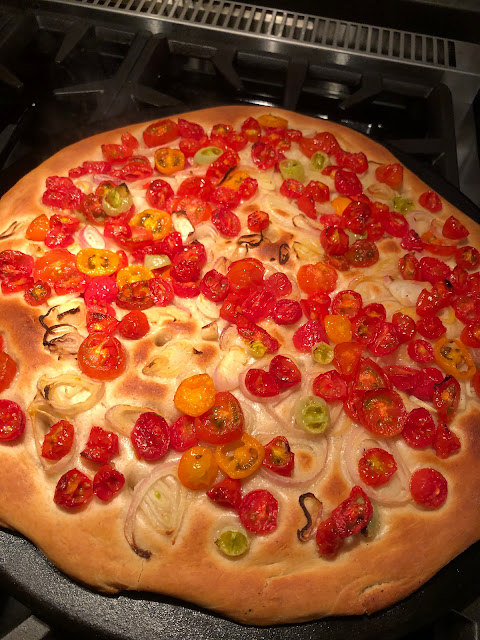 Is that not a thing of wonder and beauty?
And here's a picture of Magnolia and Gibson that Lily just sent. 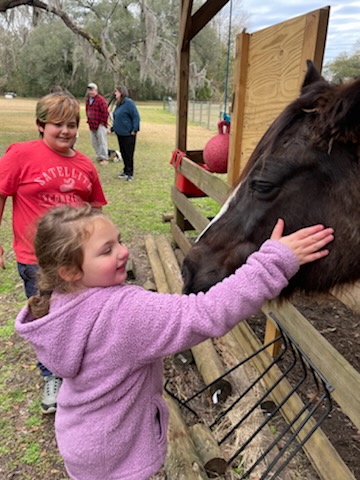 They all went out to visit Lauren's aunt and uncle today and horseback riding was involved! Can you imagine Maggie's joy?
Rachel is feeling better. We all get on with it the best we can, don't we? Whether we do that with recoveries, discoveries, or just plain plodding, we get on with it.
Love...Ms. Moon