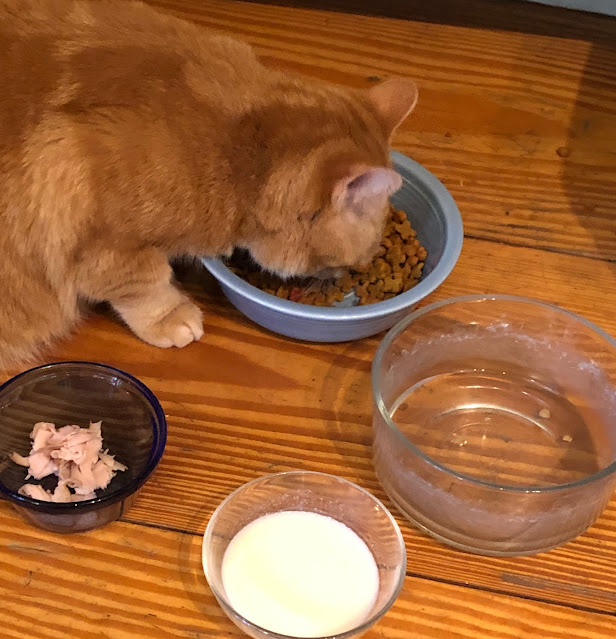 Same-same as last night, y'all. I just can't rationalize sitting down and writing a long post while my darling is here as that would be time away from her. I am already teary, thinking of her leaving tomorrow.

But here's a little story.
Yesterday Maurice ran into the house, rubbing her cheek or mouth or something with her paw over and over. Stopping every few steps to do that. And then she hid herself away. Before we went to bed, Mr. Moon found her in the dining room under a bookcase and he picked her up and she let him look at her, touch her face, but she would not eat.
Disturbing.
He said that he'd seen some sort of cat fight from a distance in the yard yesterday so what had happened? Had the other cat injured her mouth? Had she swallowed a bee? Gotten bit by something?
This morning she still wouldn't eat. I scratched her sweetly and she let me but her tail twitched in that very-unhappy-cat way. I cut up some deli-sliced chicken, her favorite, and she wouldn't eat that and I mixed up some milk and nutritional yeast which she does like but she wouldn't drink that. She'd go to the food bowl and just stand there and then walk away.
Mr. Moon and I discussed whether or not we should take her to a vet. Which we never do.
But we were willing. We decided to wait though because if it was a bite or sting, it would just take time. And within half an hour, she was crunching friskees, cautiously, but crunching and swallowing, nonetheless.

We have no idea what happened to her but I did throw out the theory that she'd choked on one of the feral cats' eyeballs and had spat it out.