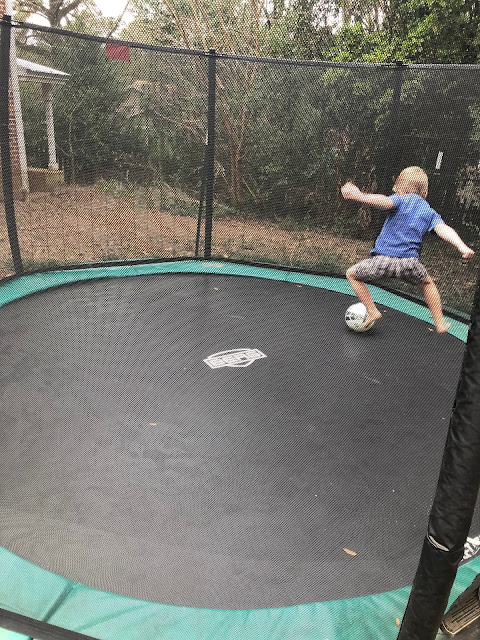 So I woke up at the ungodly hour of 7 am this morning and was surprisingly cheerful. As I drank my coffee I thought, "Wow! I should do this every day."
Even as I thought it I knew it would never happen. The road to hell is paved with good intentions and so forth.
I thought I'd given myself plenty of time to get to Jessie's house at 8:45 but, as so often happens, I got behind a dump truck on Buck Lake Road, my usual route to town. It's a two-lane road and hilly and curvy so I just stayed behind him. A guy in a truck behind me obviously wasn't having it and pulled out to pass us both and almost hit an on-coming car before he swerved back into the lane between me and the dump truck. Good thing I don't tail-gate, motherfucker. The funny thing is, he stayed there the whole way. Perhaps he had learned a little caution.
Even still, I got to the Weatherfords only two minutes after I said I'd be there and Vergil and I got to chat for a moment before he had to go shut himself into his office to make a business call. He works from home. Jessie was already at the hospital, doing some educational things.

It had been suggested that I might want to take Levon to the park which is well within walking distance. This is the same park where I used to take Hank on walks, right after he was born, because we lived right down the street. But I wasn't quite ready to make that stroll yet so Levon and I read some books and giggled a lot and then he jumped on his trampoline and then we read a book about octopuses and so then I had to find videos of that amazing creature on Youtube and then we walked to the park.
Levon is a most agreeable lad when he is with me. But of course that's because I am entirely at his service and also, I am the person who gives him going-away treats of M&M's so there is that. He held my hand and told me how to get to the park. I would put his vocabulary up to any six-year old's. At least. He is one of the most verbally talented kids of his age I've ever met. I mean- there is NO place in a conversation you can't go with that boy.
At the park he wanted to play pretend baseball on the field (where Lily used to play softball as a child) but I told him I'd sit on the bench and play the grandmother who cheers. That was okay for one home run. Then he wanted to play a game of pretend where one of was asleep and the other person was Santa Claus and Santa delivered presents while the sleeping person, uh, slept. We found a piece of sidewalk chalk that we soon started using to draw pictures of presents which added to the reality of the situation a great deal.
I got a front-end loader.
After that, there was playing restaurant. I was the server first and welcomed him into the restaurant and took his order. He wanted one billion birthday cakes or, if they only had one, then that would do. Also, a popsicle.
Delivered.
I ordered a sandwich and he brought me a pepperoni and pickle sandwich which sounded pretty good and also, a birthday cake.
And so forth. We spent some times on the swings, too. Now I have loved to swing for as long as I've been able to do it. Swinging, unlike every other physical activity, was something I was good at. I could not hit a ball or climb a jungle gym or hang from my knees or do cartwheels and ended up crying with bleeding knees every time I ever played tether ball but I could swing as high as a bird could fly and oh! How I loved it.
I learned something today though and that is the fact that a sixty-seven year old brain does not react to swinging the way an eight-year old brain does.
I got dizzy! Not bad dizzy just disconcertingly so.
One more great thing about getting older, eh? 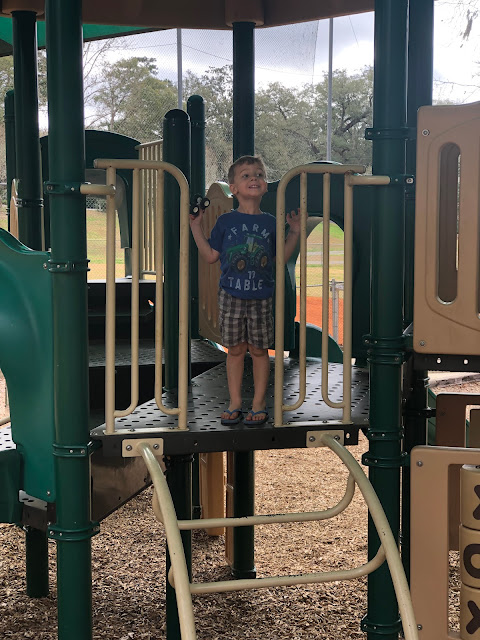 Well, la-di-dah. I was about ready to back home so I asked Levon, "You got any snacks at your house?"
He assured me he did and so, hand-in-hand, we walked back home where we had some peanut butter pretzels (which he shared so sweetly with me), read a few more books and then did a little deep dive into gorillas.
I now know far more about gorillas and octopuses than I did before today. I will no doubt forget these facts but Levon probably won't. I will tell you however, that even though we all know how very incredible both octopuses and gorillas are, they are even more amazing than we can imagine. Also- tip for the day: Never, ever, EVER get in a fight with a gorilla. It will not end well for you.
Vergil took a break for lunch and we met Jessie after her testing at a restaurant right across the street from the hospital and that was fun. She looked so nursey in her scrubs. I am so proud of that girl.
And then I went to Publix AGAIN and came home and did all the things I didn't get done earlier today and here we are.

Mr. Moon has finished the railing for the kitchen steps. 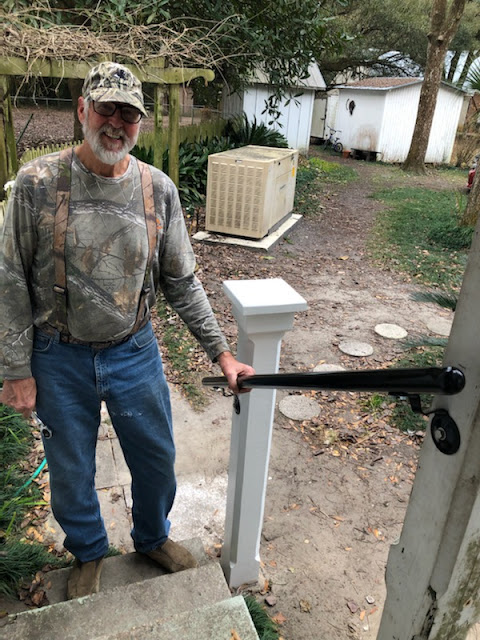 When that man builds something, it is sturdy.
And hey! Look here! 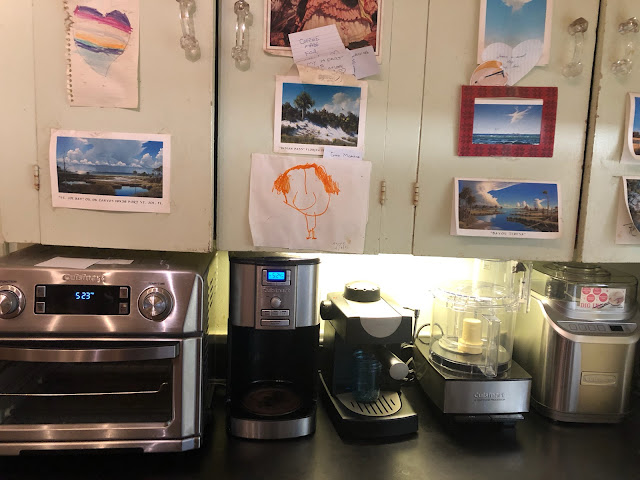 So yeah. That's a bit cluttered but for now- it'll do. My life is cluttered. As long as I remember to clean around things and under things, who cares? I am not Martha Stewart nor will I ever be.
I just realized that every one of those appliances are made by Cuisinart except for the thrift-store espresso maker.
Huh. I didn't plan that, it's just how things in my kitchen have evolved.
I've found a place in the freezer for the canister which is the most important part of the ice cream making process and since it takes 12-24 hours to get that sucker cold enough, I believe it will just live in there. I'm planning on doing a test run tomorrow evening.
And by the way- my arm is fine now. I am just a hivey person. This is the way of it. Those welts I had didn't even itch that much. Nothing at all compared to yellow-fly bites which I'll be complaining bitterly about in a few months.
Thank all of you who were concerned, though.
Love...Ms. Moon
Posted by Ms. Moon at 6:12 PM