As Hank Said, "Who Let Them Read 'Animal Farm'?" 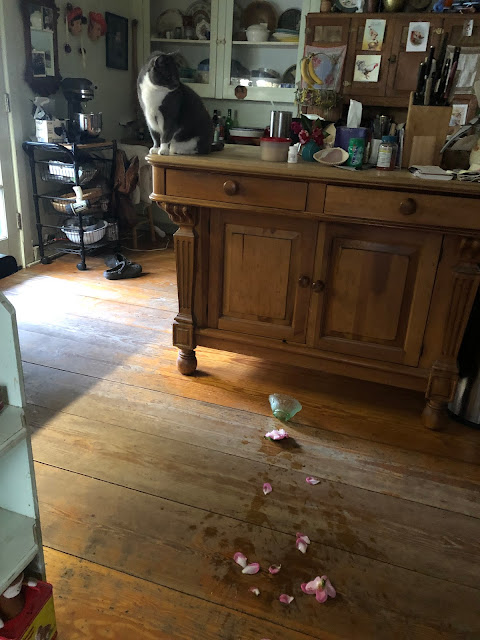 I heard a kerfluffle from the kitchen this morning and walked in to find this. I could practically hear Jack saying, "Yeah, I did it. So what?" As is the nature of cats, he showed no remorse whatsoever and perched up there regally for a few minutes to make sure I was aware of what he'd done and what his attitude about it was.
I said, "Damn, Jack," and cleaned it up. At least the bowl didn't break.

Then I went out to the hen house to let the chickens out, feed them their scratch, fill up the feeder with laying pellets. And this is what I found there. 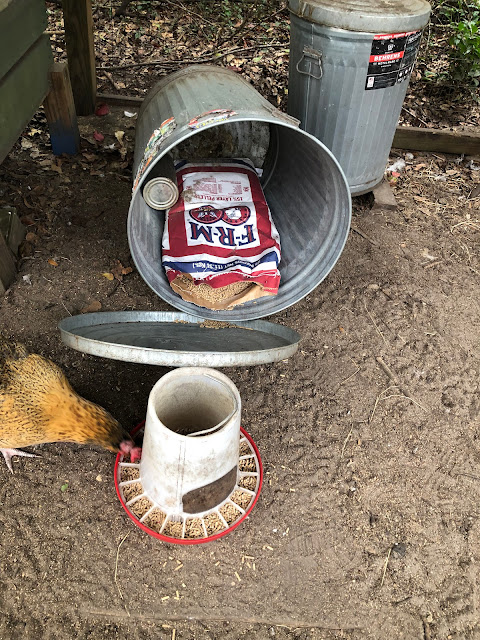 To top it all off, yesterday when I got back from my walk, the tablecloth on the back porch table which had been perfectly intact when I left looked like this. 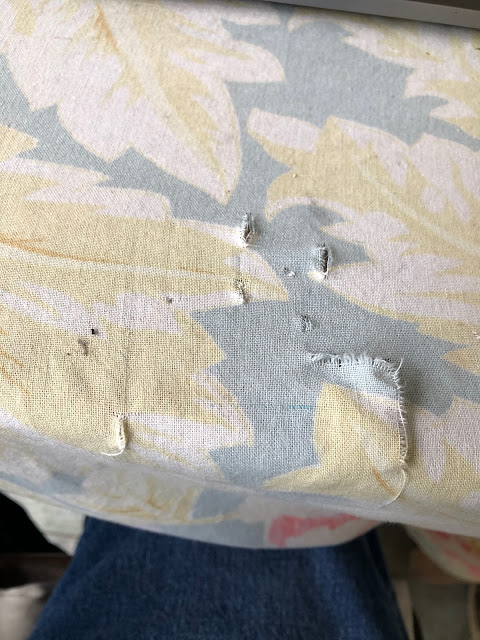 I know that was Jack too because he'd been lying on my chair right in front of that. What the heck, animals?
Are they planning a take-over or are they just slowly asserting their dominance?
Who knows?
Not me.
I took another walk today. Yes. I did. Believe it or not. I can barely walk now. Oh well. Pinot was sitting in No Man Lord's yard and got up to talk to me as I passed. We had a little conversation. No Man Lord was eating at a table outside his RV and didn't even look my way. This is how he is. I respect that. But Pinot told me that his auntie had died. She was 93. The last of his mother's siblings to go. His mother is dead too. Pinot is the same age I am so I would assume that she'd passed. Still- an aunt living to 93 is something.
He asked me if I still had chickens. He knows darn well I do as he walks past my house almost daily and sees them running about the yard. I told him that yes, I did and he said, "You got any eggs?"
Again I told him that yes, I did and I said that I'd put a carton on top of the post by the gate for him which I did with a note rubber-banded around the carton that says, "Pinot."
They're still there.
A few weeks ago I was talking to Lis and we were both bemoaning the state of our homes as pertains to order and cleanliness. We agreed just to be sluts of housewives (which is what we were accused of being by a mutual friend the night we fell in love) and not worry about it. She called me today and when she asked what I was doing and I told her that I was trying to clean the oven she said, "What about our sluts-of-housewives agreement?"
"I don't know," I told her. "I must be really bored."
After I got off the phone I did clean the oven the best I could without using the caustic chemicals that are the only things that really clean an oven. When I got my new stove, I vowed to wipe it out after cooking each thing in the oven but of course I have not. We keep the burner surface as neat as a pin but the oven...
Well.
After I did the best I could with that, I went truly insane and decided to try and clean the mildew off the stair trim. It was bad. But Jesus Christ- the ceiling is covered in mildew (mold?) and it's about fourteen feet tall or perhaps taller. I do not know. And patches of paint are coming off. We just try to ignore such things. But for some damn reason I got the urge to clean this. 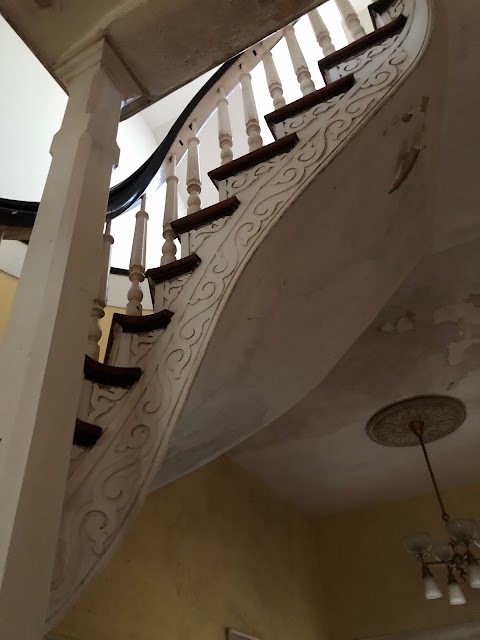 That's an after-shot by the way.
I lugged a bucket with Fabuloso and vinegar up to the top and stuck my arm through the stair rails and tried to use a scrub brush to get rid of the nasty stuff and that did nothing. Plus I was scrubbing blind. Plus it was extremely awkward.
Plan B involved a spray bottle with bleach and water and and a rag. That worked a lot better.
Bleach is magic.
BUT.
Some of the bleach water liquid dripped down into the thermostat. 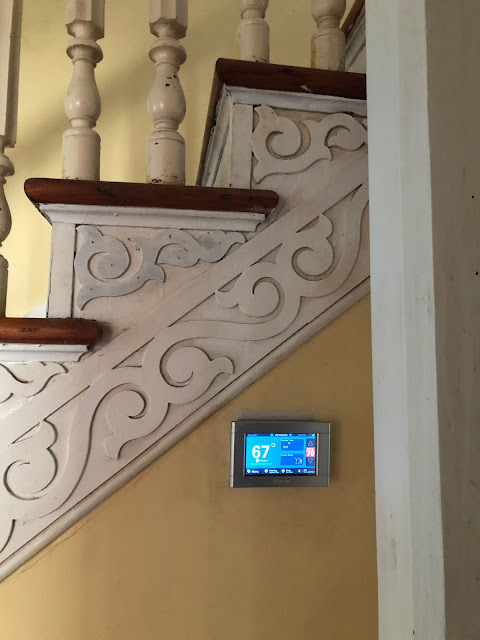 Which then switched the temperature setting and would not respond to touch which is how it operates.
You know- I just should not clean.
Anyway, Mr. Moon took it all apart and called someone who knows about thermostats for advice, dried it all out with a heat gun and I don't know what else. Reset it at the circuit breaker box?
Anyway, it appears to be working now.
After all of that I pointed out where I'd cleaned and said, "Doesn't it look better?"
He said it did but he wasn't nearly as impressed as I'd hoped he'd be.

I think I'm done with cleaning for a few days. Maybe tomorrow I'll take a break and go do my weekly shopping. That's always sort of stressful but at least it doesn't require me to expose myself to industrial strength cleaning solutions. At least my hands are disinfected now. Or at least they smell like they are. And of course I am looking forward to trimming the roses with all of their thorns that rip and tear right through gloves and sleeves and also the confederate jasmine with its milky, sticky sap that is probably toxic to all living creatures.
Why is everything out to kill me?
Oh, I know it's not. Not really.
Just my animals.
As Joseph Heller said once, "Just because you're paranoid doesn't mean they aren't after you."
That's it for today, kiddies!
See you tomorrow.
Love...Ms. Moon
Posted by Ms. Moon at 6:13 PM