No Title, Lots Of Pictures 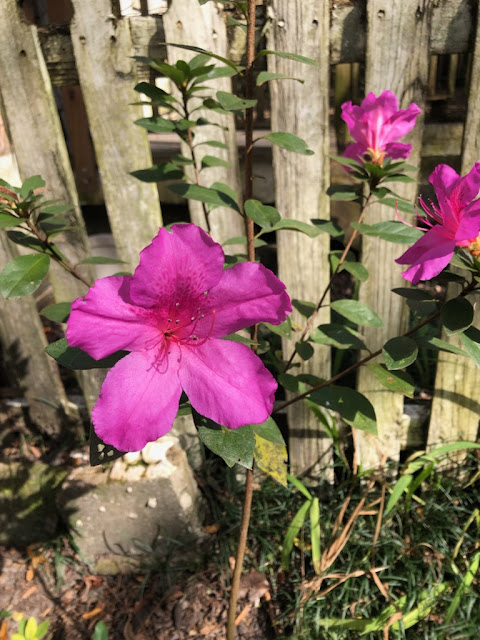 Besides the many azalea bushes we have out front which were here when we got here, there are a few random ones in the back yard that we planted and which, I am ashamed to admit, I have not taken very good care of over the years but they are alive and here's one that's blooming. They are looking a bit better since I started my chicken/compost lazy woman's method of fertilization and clearing-out around which is that I dump the scraps and peels I feed to the chickens beside the plants that need some attention and the chickens proceed to scratch about the plants, thus clearing the area, also pooping, and then, what they don't eat goes back into the soil eventually.
Win, win, win.

Chickens are such a neat part of the eco-system of my yard. Of course I can't plant pansies because they will eat them and I can't set begonias down where they can get to them because those, too, are tasty chicken treats but nothing is perfect.
Except eggs, of course.

So. Guess what? I woke up this morning planning on dragging my ass to Costco to buy new airpods but I tried one more time to pair them with my phone and as if by magic, as if they had suddenly remembered what they were supposed to do, the case flashed the correct colors and my phone screen advised me as to how to connect them to the phone and voila! They did. Easy as pie.
It was like during the night they got their minds back and this morning said, "Oh yeah. We remember this."
Yesterday, no matter what I did on the advice of every tech nerd AND Apple on the internet, my phone would not recognize them. It's a longer story than that but who needs to hear it?
Not you.

So that was good and I've resumed my book-listening, podcast-listening life again and today I began the task of pruning back the confederate jasmine on the fence in the back yard. In years before I have done the whole job in one day but last year I didn't get to the chore at all and besides that, I am taking things more slowly and deliberately these days. 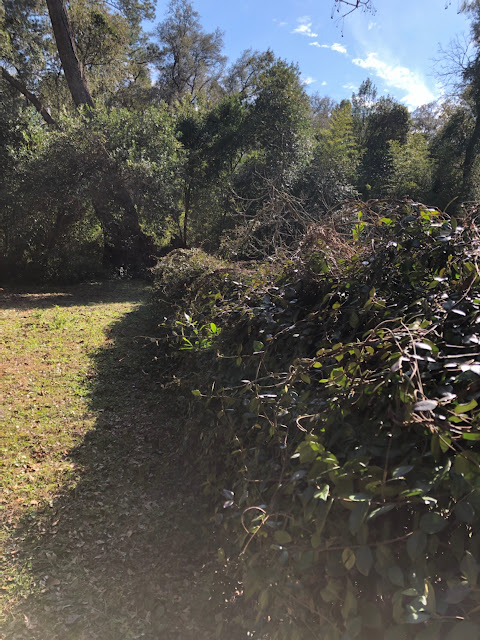 There is more you can't see. And so, yes, it is a bit daunting and I got maybe a sixth of the entire job done today. That was three very piled-up garden carts worth of trimmings. Here's some of what I'm dealing with. 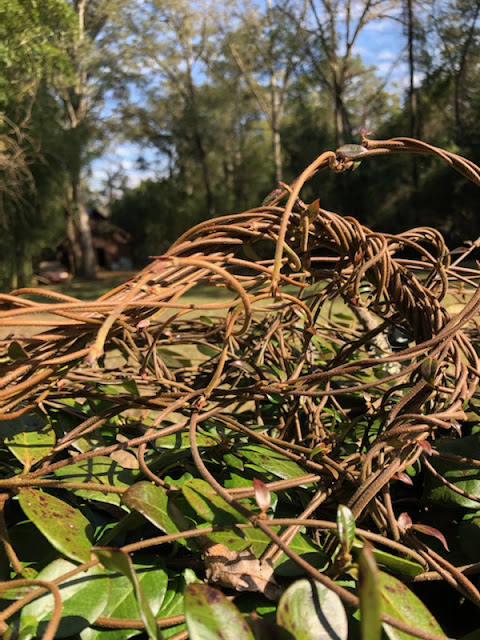 And really, that's the least of it.
Here's a shot of what it looks like where I've cut it back to within an inch of its life. 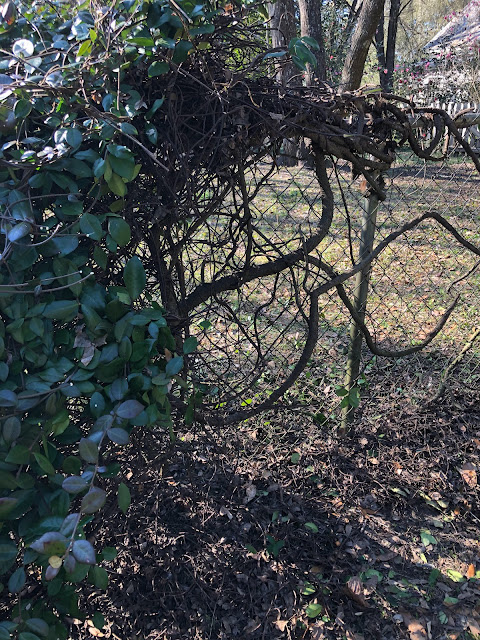 Left side, untrimmed. Right side, trimmed.
If I had any sense at all I would just have Mr. Moon pull the dang vines up with the truck and call it done. Who needs confederate jasmine? Okay, it does smell sweet but I'm not sure it's worth the trauma. Actually, I am quite sure it's not.
Oh well, keeps me out of the pool halls. And also, it gives me more bonding time with my always curious chickens who have to observe everything I do outside. 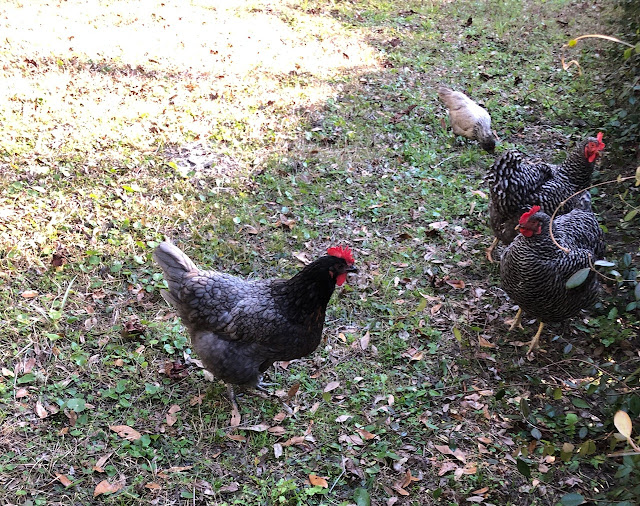 Maurice spent some time with me too, but she got bored and moved on to other, more fulfilling activities like hiding on the porch and making sure that Jack doesn't come in. 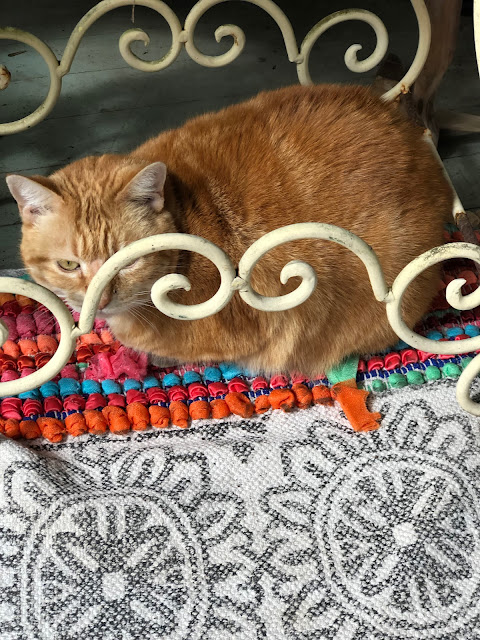 So recently I realized that some plants in the garden were not, as I had thought, mustard greens but in fact, are Gai Choy, otherwise known as Chinese mustard greens.
Well, you learn something every day. Here's what it looks like, fresh out of the garden and washed. 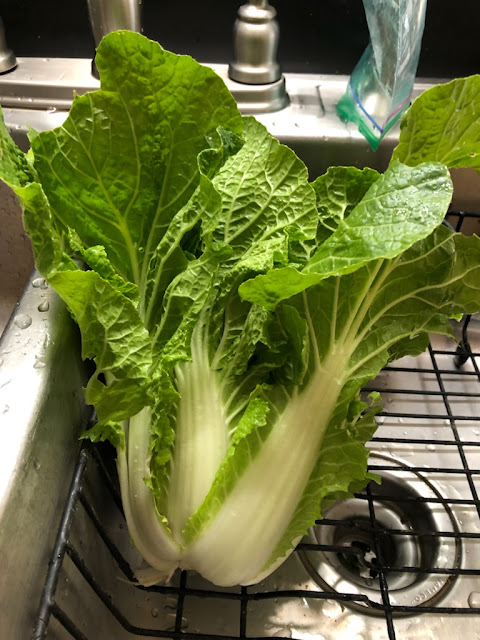 It's a pretty thing, isn't it? Mr. Moon had an early-ish basketball game to attend so I've already made his supper which did indeed involve the Gai Choy and also, leftover steak from last night. Which was, by the way, delicious and we had a very sweet time.
Here's what the stir fry looked like in the wok. 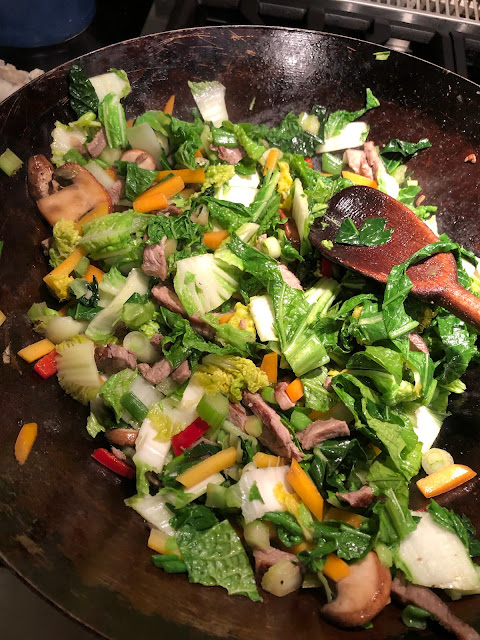 Oh my Lord! Have you seen the moon tonight? I just went out to put the chickens up and it blasted my brain into tiny bits. 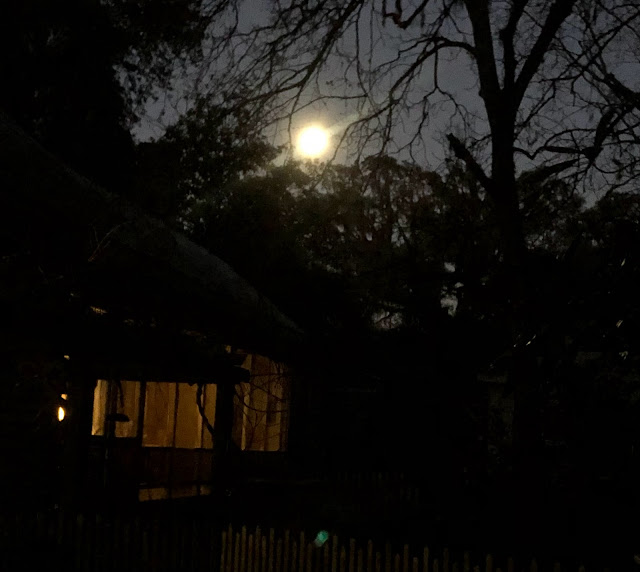 I have got to get a real camera.
I so miss how our darling Rebecca always named the full moons for us. I think I will call this one the "If You Were On A Beach In Florida And Saw This Moon Right Now You Would Be The Luckiest Person In The World" moon.
Love...Ms. Moon (Believe it or not)
Posted by Ms. Moon at 7:16 PM