I Was Chauffeur Nurse Today 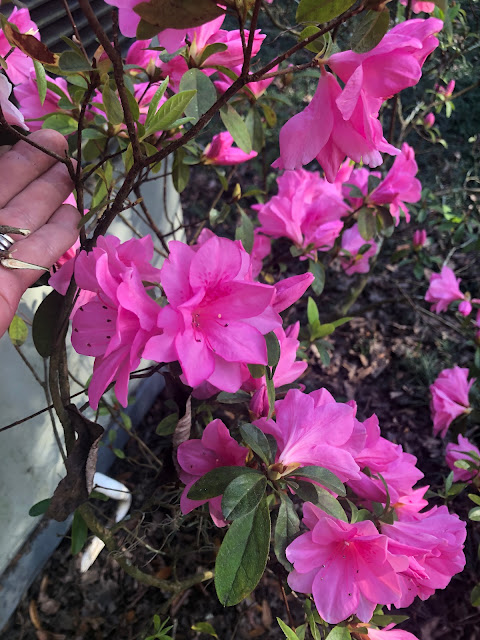 Today was another not-quite-usual day in that Mr. Moon had to get a follow-up endoscopy. Three months ago when he got his endoscopy and colonoscopy they noted that he had some esophageal stuff going on due to his chronic heartburn so the doctor prescribed an acid blocker and told him to come back in three months and so he did. He's had chronic heartburn his whole life. But the medication has helped tremendously and today's scope showed "great improvement" according to the doctor and he just needs to continue the medication and be aware.
Now all of that was quick and certainly good news but as we all know (or should know) the drugs they give you before the procedure can knock you for a loop as they did Mr. Moon three months ago and then again today. When I was allowed to join him in the recovery area, he actually said, "This is pleasant."
And then he went back to sleep with a smile on his face.

Eventually, he roused enough to get up, get dressed, and get in the car and he tried to convince me that we should make a picnic and go out on the boat or maybe go to Chow Time, which we had discussed before the procedure but I sternly told him that no, we were not doing either of those things.
So we went to the Wharf where I got us take-out and we ate in the car in the shade and he came back to full awareness pretty quickly but he's been asleep most of the afternoon.

Thus I have done very little today in the way of getting things done but I have taken care of my sweetie and watched over him carefully. He is drinking a cup of hot cocoa now that I made him. Sleeping made him cold.

The temperature got up to eighty today but because I haven't done anything very physical, it has felt pleasant. Another perfectly blue-sky day and there is much glory going on, as I so thoroughly discussed yesterday. As I may have also said, the azaleas in the front yard may not bloom at all this year due to Mr. Moon's late trimming and the freeze we got a few weeks ago. But the picture up top is of some of the azaleas that he did NOT trim and they are lovely. They are growing right beside the heat pump by the back porch.
Here are some more pictures. 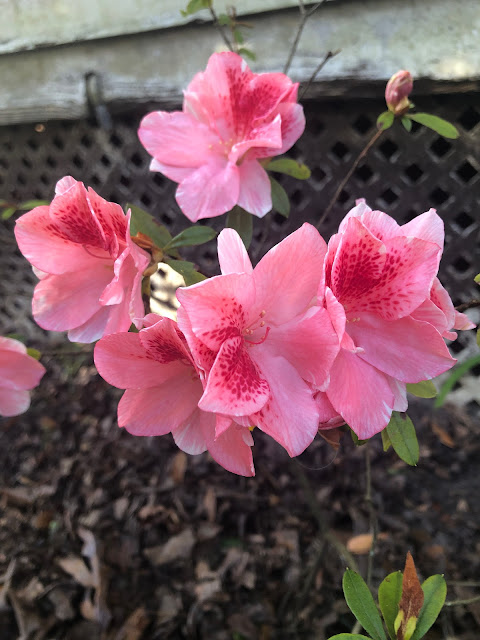 A very small and coral-colored variety of azalea. I have only one little bush but it is blooming nicely. 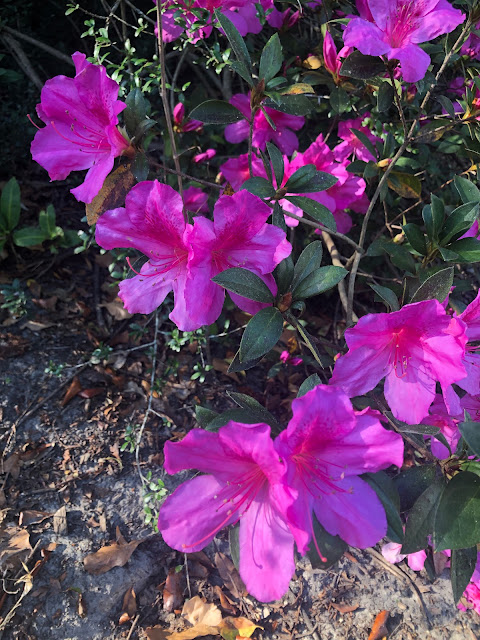 These are probably the most "traditional" azaleas you see around here. They are like the ones in the front yard but were not trimmed and grow untended and neglected between our house and the church, half smothered by pyracantha, nandina, and beauty berry. Still, they thrive. 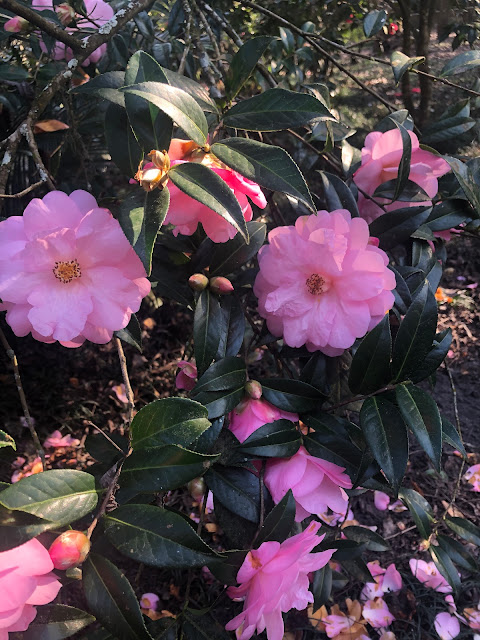 Some of the camellias which are giving it their best effort right now, determined to let all of the other flowers know who's boss. 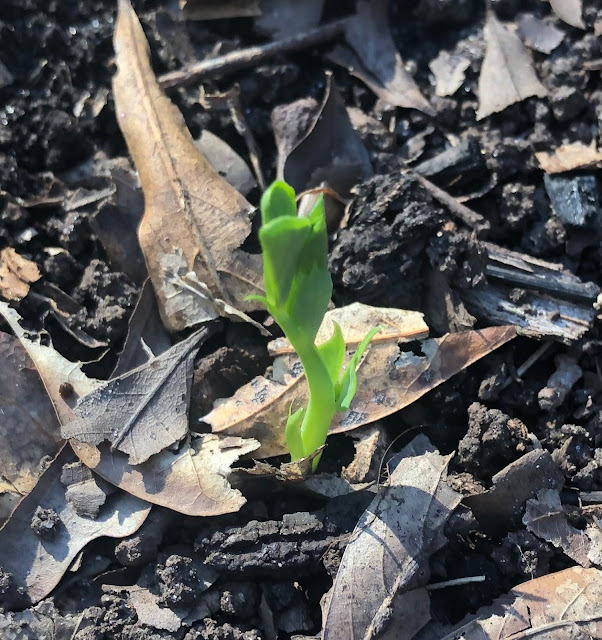 A tiny pea shoot in the garden. 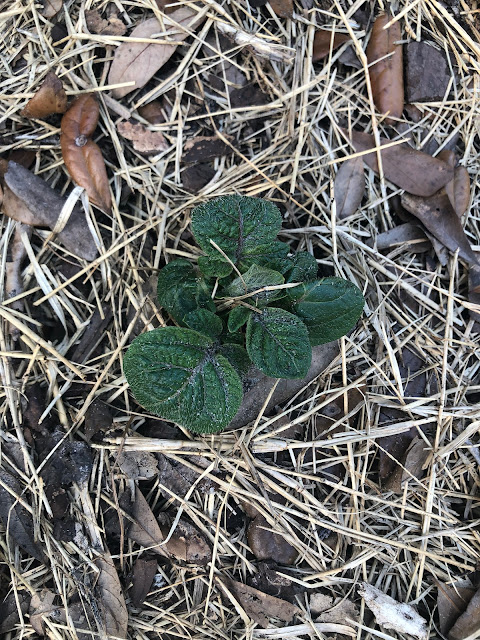 The sturdy, dusty, gray-green leaves of a potato plant.
And the rest are pictures of the flowers I brought in to put into vases.
Of course. 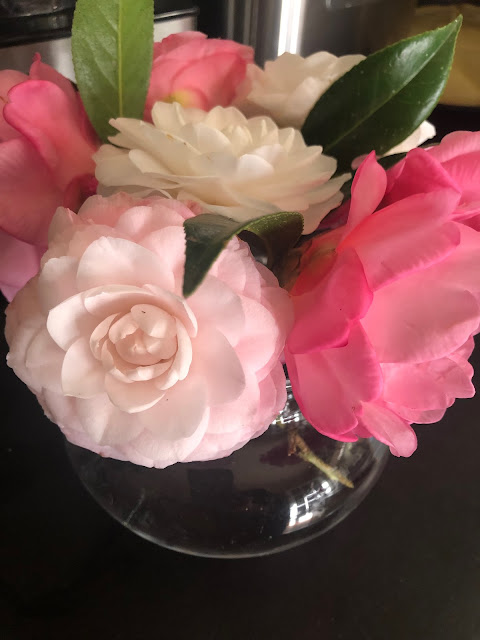 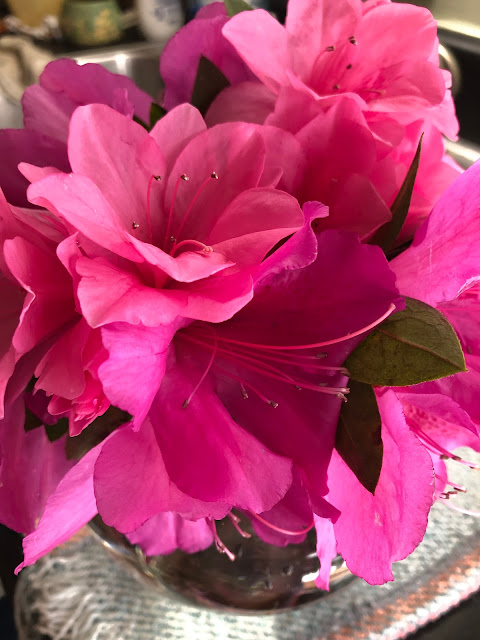 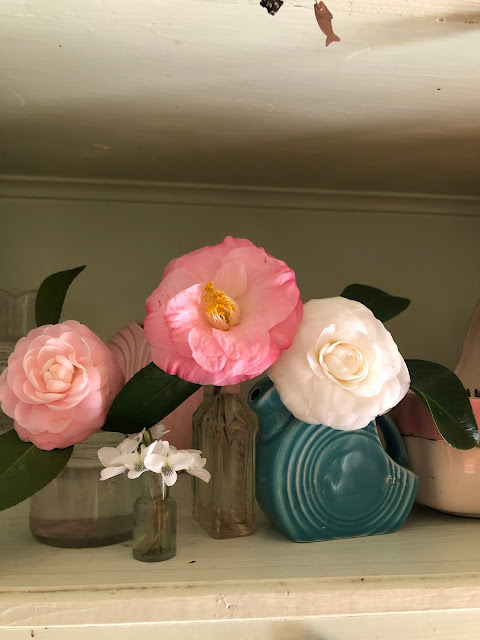 There are more. I will spare you.
There is some bird which I cannot see but which is loudly proclaiming, "Speak, speak, speak, speak!" I wish I knew my birds but I do not.
One more thing- I just finished reading a book I mentioned the other day entitled The Five Wounds, by Kirstin Valdez Quade. I read this one with my ears and I enjoyed it tremendously. Lily recommended it to me and if I had to describe it, I think I would say that it's a book about mistakes, suffering, atonement, growth, courage, second, third, fourth, and so on chances, family, and love. Many types of love.
Also, babies.
And a teen-aged mother named Angel whom I will not soon forget.
All right!
I hope all of you are well and that wherever you live, wherever you are, the signs of spring, whether gaudy or almost invisibly subtle, make themselves apparent to you, if not now then very soon.
Love...Ms. Moon
Posted by Ms. Moon at 6:24 PM