At Least My Husband Is Home 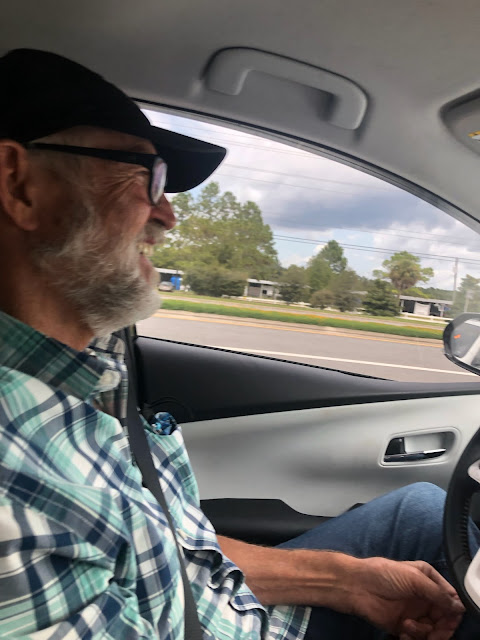 The man is back! However, he didn't get back until this afternoon around two. I got a text from him last night that said he was still in Las Vegas- they were short a flight attendant- and he'd be spending the night in Dallas.
Which is what he did.
So instead of being woken up in the middle of the night, I drove to the airport today and surprised him. I went back and forth on the issue quite a bit. His car was at the Credit Union so I'd only be taking him from the airport to there but then again- there was that element of surprise.
So I did it.
And then we had lunch. So that was nice.

It feels good to have him back home. He's sitting in his chair right now with his phone and computer, taking care of business. What sort of business, I do not know. Fishing business? Hunting business? Car restoration business?
Doesn't matter. He's here.

After lunch I stopped in at the Costco for about two things and ended up buying far more than that. I was on a tear, deciding that I'd just go ahead and get the Costco sizes of everything from toilet paper to paper towels to dishwasher pods to cat food to dental floss.
The dental floss especially thrills me. For ten bucks I may have enough dental floss to last me for the rest of my life. Wouldn't that be great?
I sure hope that Jack and Maurice like the Kirkland brand cat food because I've got twenty-five pounds of it. They probably will. They know the agreement around here- I buy them food and they eat it.
Done.

I just talked to a friend who knows several people who have covid right now and also several people who have died from it in the last weeks. This is scary. Of course I'm still masking and I've just received information that the Jefferson County health department is offering the third moderna shot, the booster, via appointment made by phone. You have to be eight months away from the last one you got and we won't reach that milestone until October but I guarantee that as soon as we qualify, we'll be baring our arms.
(There's a constitutional pun there somewhere.)

Speaking of the constitution- what Texas has done is abhorrent. And I am sure that we are all aware of the deep hypocrisy and irony of a state who refuses to mandate masks because of personal freedoms to make choices about one's own health concerns and yet deems it necessary to disallow abortion after six weeks of pregnancy. At "six weeks gestation", a woman has only, in reality and actuality, been pregnant for four weeks- the amount of time it would take to miss a period. And not only that, but this, from the Huffington Post:

Any private citizen — even if they don’t live in the state — can sue anyone they suspect of “aiding or abetting” abortion care in Texas and be rewarded with at least $10,000 if they win, with all their legal fees paid for by the other side. The law allows for doctors and nurses to be sued, as well as any friend or family member who drives a patient to a clinic.

You want to talk about Sharia Law? How about personal freedom? How about...okay. You know. We all know.
And what's the Supreme Court doing about this?
Absolutely nothing.

There is, however, this:

Not that he can write laws. I just can't even begin to describe my distress and anger over this. And as surely as banning mask mandates costs lives, banning safe, medical abortions does too.

Although I know that there are many women on the right-to-life side of the argument, it is nothing but plain and simple patriarchy that makes anyone feel that a woman should not be able to make what is very often the most important decision of her life. Her life. Her body. This does not bode well for any of us. You want to talk about slippery slopes? Bring it on.