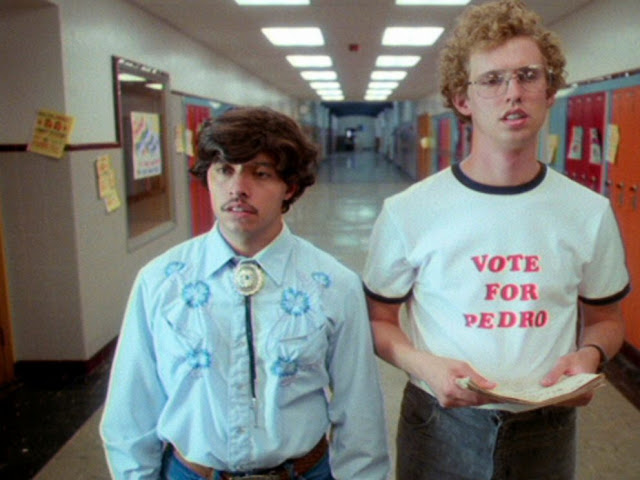 Yesterday when Owen and I were talking, he mentioned a "lygor" and I said, "Have you ever seen "Napoleon Dynamite"?

He had not. And so we remedied that last night. I don't know if I've ever spoken of my love for that movie here before but it truly is one of my favorites. Because it's such a low-budget film, it had to be creative and charming and clever and self-aware and self-ironic and funny and heart-touching and, well- just all of the stuff I like in a movie. The dialogue knocks me out. I think it's got some of the best lines of any movie I've ever seen. I personally love the acting. I love the characters. I love the way it gently pokes fun at stereotypes and I love the way it captures the absurdity of high school right along with the impossible tenderness of first love.
It was probably more fun for me to watch it for the who-knows-how-many-times than it was for Owen to watch it the first time but I think he liked it. At least he stayed awake until the very end. I always forget that after ALL of the credits run, possibly the best part of the movie is still to be seen. If any of you have not seen it, I will not ruin that ending for you but I will just say that one of my favorite movie lines of all times is there.
"Sorry I'm late. I tamed this honeymoon stallion for you."
And rather unbelievably, there is not one cuss in it.

The pizza I made was pretty darn fantastic. I finally made the thin and crispy crust that Mr. Moon loves and the Alfredo sauce was spectacular. I made two pizzas, one with just the sauce, chicken, a few banana peppers, and some onion, and the other had spinach mixed in with the sauce and was topped with all the things the first one had plus artichoke hearts and mushrooms.
Yeah. It was good.

After dinner and a movie, Owen took his shower and got into his very clean bed and I said, "I guess you don't need me to read 'The Little Red Hen Makes a Pizza' do you?" and he said, "No. I'm tired."
I said, "I am too." and I was. But I did kiss him good-night and tuck him in.
He is such a fine boy.

There were pancakes this morning as there always seems to be on spend-the-night morning-afters. And after Boppy took the boy home I decided to get a little more clearing done in the garden. I swear- I am as bad at pulling the spent plants as I am pulling seedlings to thin new rows. But damn! The peppers, despite falling over and looking extremely weary are still giving forth and the peas are still making pods, plump with their sweet little morsels of protein heaven. And the zinnias! 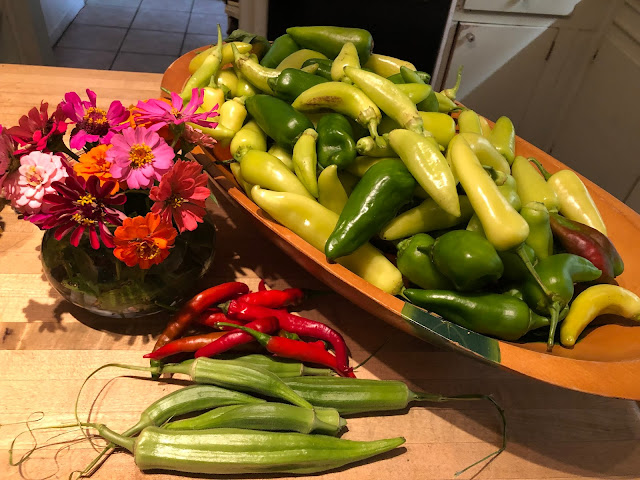 That is the last handful of okra I'm getting. I can say this with certainty as the plants have mostly died back to sticks and those I have pulled. I think I'll cook the few I picked today with some tomatoes and onion for our supper. And I suppose I must make one more batch of pepper jam.
But I did do some weeding and I did pull some beans and a few eggplants. It wasn't SO hot but the humidity is right around 80% and quite frankly, I'm miserable out there working in it. Mr. Moon's been pushing gravel around for hours on the little tractor-thingee he rented after he dropped off Owen. I don't know if it's a skid steer or not. I just know it has a something-something in the front and another something-something in the back.
My observational skills are obviously lacking. But it does appear to be doing a pretty good job of moving that gravel.
I think the man and I will sleep pretty well tonight.
And now, not to be grim or anything, have you seen the report that at this point, one out of five-hundred Americans have died of Covid so far? And that is not counting those who died before testing was established or those who weren't, for whatever reason, counted as Covid deaths.
My point here is not to depress anyone but in fact, to remind us all that masks are very much still necessary for all of us. And that if you have not been vaccinated, just please stay home. I found out today that my niece got the damn virus at school but thankfully, she has been vaccinated and her symptoms are no worse than those of a bad cold. Her mother who is a nurse, is furious with DeathSantis who refuses to make kids mask. As I've said before, our superintendent of schools has gone against the governor and is requiring masks for children in schools up to the age of twelve but not beyond, hoping, I suppose, that the children over twelve will have gotten their vaccinations.
But all of them have not. Obviously.
Here's the new Florida motto: 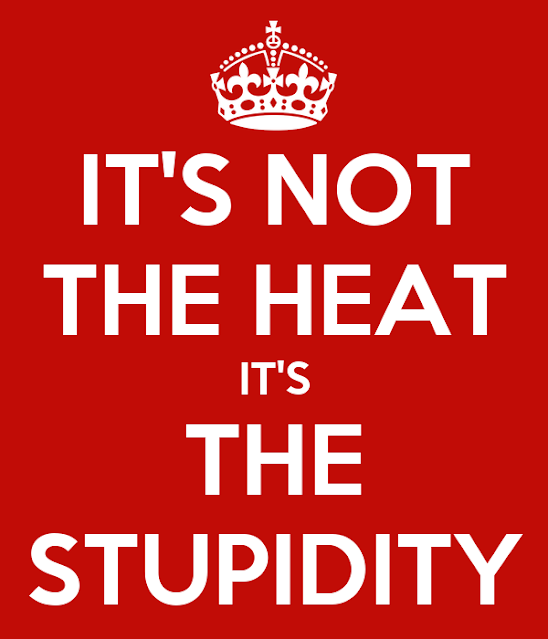