Time Humbles and Tumbles Us With Its Mysterious Passing 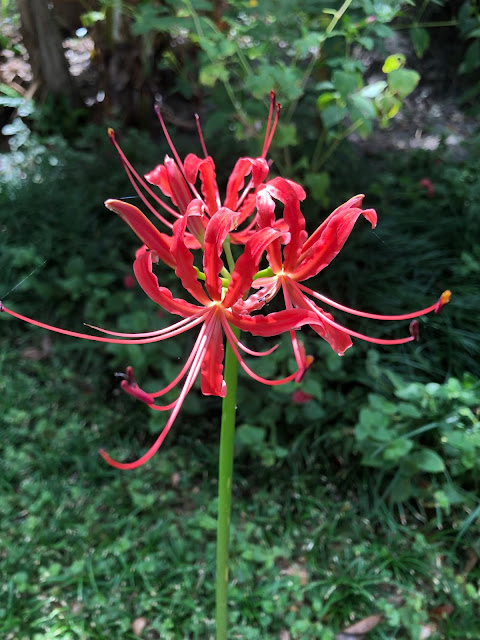 And this is what the hurricane lily looked like this morning. They are rather magical plants, I think. Their lives are ridiculously short. One day you'll see the stalk sprouting up, the next day a bud forms, and then it opens to bask in sunlight and glory for a few more days, at most. The rest of the year they are the earth's little secret, hidden entirely from view, gathering up the energy required for such a fleeting, flaming and delicate existence.
How I love them!

I should probably just end this here as the rest of the day was not much. I mailed a package, I did some laundry, I swept some floors, I went to Publix. And that was NOT much of a pleasure today, I have to admit. I kept seeing people that I did not want to talk to and I suppose they had no desire to talk to me either as we pretended we did not know each other although of course fate did throw us into the same aisle over and over again. I bought way more stuff than I needed for no reason except that some things were BOGO that we do use and as my mother always said, "They'll keep just as good on my shelf as theirs." Or something to that effect. And I also couldn't remember if I had enough of certain things and so I just bought more. Flour, for instance. I had meant to check the flour supply before I left but did not. So now I have plenty of flour.

Owen is coming to spend the night tomorrow as they are off of school on Thursday and Friday. I'm excited about that. I've asked him about three times what he'd like to eat, via text, and his answers have been slow in coming and fairly incomplete. I finally asked him if he'd like homemade pizza and did get a definitive answer on that.
"omg. Yes."
So then I proceeded to ask him what his favorite toppings were and whether he likes thin crust or thick. He answered, "Chicken."
Okay. We'll go from there.

When I was in the store I started thinking about how Owen used to stand on the kitchen step-stool and help me make pizza by smushing the dough with his little fingers and carefully placing the toppings on the pie. He was barely older than a baby and it seems so impossible to me that that happened so very long ago and that now he's almost as tall as I am and could probably make his own pizza if he wanted to. As I said in a comment the other day, people always tell parents how fast the years fly by, how quickly their babies grow up but no one seems to warn the grandparents. I guess it's assumed that grandparents by very definition know how fast children can grow as we are the parents of their parents but there's also the crazy way that times goes faster and faster every year as each year becomes a smaller and smaller percentage of our lives which means that they grow up even faster and that's just hard.
I look back at pictures of all the children when they were babies, toddlers, and my heart just yearns to be able to hug them and hold them the way I did then when they were so small. 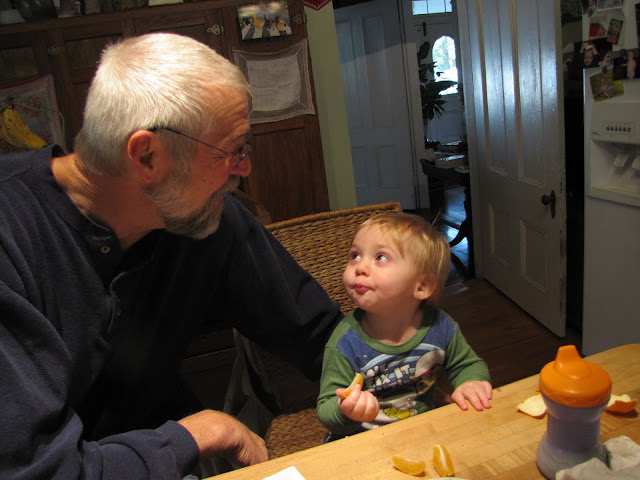 Do you remember Owen when he was this little guy?

Ever since Owen was a baby, when he'd leave my house with his mama or daddy, I would always whisper to him, "You're my little prince," when I kissed him goodbye.
I still do. Don't tell him I told you that.
And I just told Lily on the phone that I sort of feel like royalty is coming to visit when Owen's planning a sleepover here. He IS my little prince although he's not little anymore. But he was my first grandchild. He gave me my grandmother name which is the perfect grandmother name for me.
It's only supposed to get up to eighty-one degrees tomorrow. I can barely believe that. I guess the hurricane lilies know what they're talking about as they always come up when summer and fall are at their cusp. 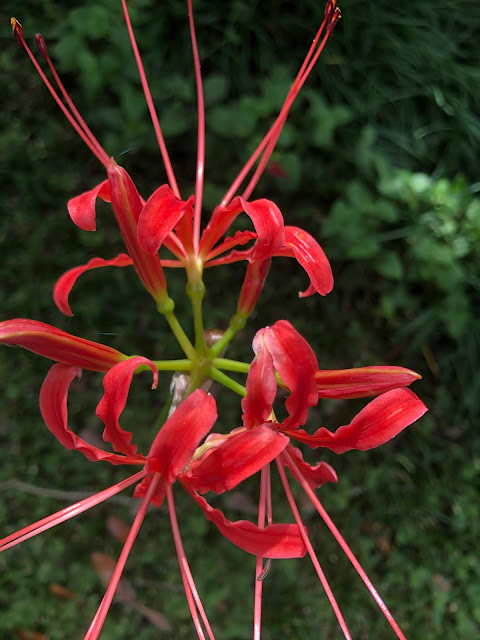