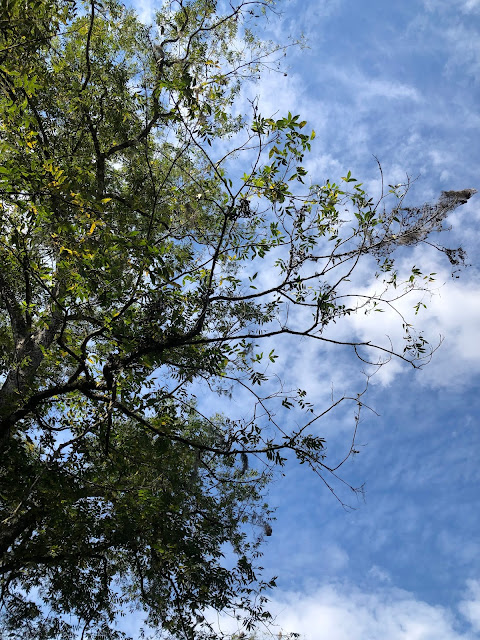 When I went to let the chickens out this morning, I looked up to see pecan leaves twirling slowly down in a graceful fall. They are always the first to lose their leaves in autumn and the last to get them in the spring. Although it is still quite warm here, the humidity is noticeably less and that alone makes it feel like fall.

Letting the chickens out and filling their feeder was about the only damn thing I did today. I don't feel bad, I've just had no energy. I spent almost the entire day sitting on the couch, watching TV and hemming a blanket and then stitching up a pillow that needed mending.

And I feel like a complete waste of space. I know that it's okay to have days like this. Yesterday, although I didn't feel as if I was doing much, I was expending energy.

Meanwhile, my husband has been a whirl of activity and doing. He is leaving Saturday morning for almost two weeks in Canada and is trying to get everything tied up neatly before he leaves. This morning he took a friend of ours who just had a knee replacement to town to see the doctor and then ran a few errands with him and took him to the grocery store. This man of mine is such a good man. He is kind and is never hesitant to help someone out whether a friend or a stranger whose car has broken down on the side of the road. If one of our children needs help of any kind, he is there to provide it, no questions asked. After all these years he continues to amaze me, surprise me with his goodness. While we were on the road last Friday, he got a call from a woman who is looking for a new car and he spent at least half an hour talking to her about the pros and cons of different vehicles and it was almost fun, listening to him in his professional capacity. He's selling almost no cars himself right now due to the shortage of the pre-owned, quality cars he has always sold. He flat-out tells folks that he can't get them what they want for the money they want to pay. Prices have gone up astronomically and he simply can't find the cars. But he still spends a great deal of time talking to people about their options, giving advice. Helping.

Here's something I found sweetly hysterical:
The other day he was going to town and asked me if there was anything I needed. I told him that due to the antibiotics I'd been given in the hospital I was developing a yeast infection. (Sorry to any men who may be reading this but women do have vaginas and we do get yeast infections and they are a torment.) So he said to me, "Of course. Do you want me to get you some Monistat?"
I was amazed.
"How do you know about Monistat?" I asked.
"I've lived around women for a long, long time," he said.
And he bought me some.

Now THAT is romance. Roses are nice but yeast infection treatment is infinitely better if you need it.

It's funny how often I dream that he is leaving me, has left me. You'd think after thirty-eight years of being together and his constant telling me and showing me in so many ways that he loves me, I would not be so obviously subconsciously worried about his devotion. And yet, I must be. It's a common theme in these dreams that he has another woman and a child with her and that he is done with me and is ready to be with her.
I think she enjoys hunting and fishing.
Whatever.
It occurred to me the other day though, after one of these dreams, that it may be that it's the dark, old memory of my first real boyfriend leaving me that I am dredging in these murky waters and that my sweet husband is just taking the brunt of that still painful desertion. I hardly ever think of that boy now, but honestly, it was devastating when it happened. And who knows? There may well be some leftover trauma from not seeing my real father from the time I was five to the time I was thirty. The message was given quite clearly and firmly that men leave. That's what they do. It's hard to shake these early lessons.

When I wake up from these dreams, it takes me a moment to realize that the man in my dreams who was so callously telling me good-bye bears no resemblance to the man I sleep next to every night. Who is as free with his kisses and embraces as he was when I was a beautiful young thing. Who always sets my coffee cup out in the morning beside the coffee pot. Who comes in to check on me when I go to bed to read before he comes to bed. "Can I bring you anything?" he always says. Who never fails to thank me for our meals. Who tells me how lucky he is.

I am the lucky one.

Last night he was stretched out in bed beside me and I thought "how beautiful he is." And he is. Yes. He is older but in many ways he is more handsome to me now than he ever was. He is my regal Viking, my gentle giant, the man whom our grandchildren run to, screaming his name.

When Covid first became an apparent serious situation and we realized we were all going to have to virtually quarantine, I wondered how we would do, the two of us. I have been so used to him going off to work every day, coming home at night. To my joy, we have become closer in these past almost-two years. We can not only tolerate each other, we can be content and happy with each other's presence. We seem to both have a great need to take care of each other in the ways that we do that. And our appreciation for each other has only grown.

I'm going to miss him when he's gone. I mean- really miss him. Generally when he goes off on these man-trips, I'm a bit sad but also a little excited at the idea of eating all of the Le Sueur baby peas and salmon I want. To have less laundry, less dirt on the floors, a bed that is made up with a tug of the sheets, a quick tuck, and a straightening of the quilt.

Yeah. Not so much now.

Ironically, the older we get, the more I want him to be able to freely go and do the things in the woods and fields that bring him joy and at the same time, the more I know I will miss him.

I can only hope with all of my heart that he goes and has a good time and then comes home safely, whole, and well, and eager to sleep in his own bed with his own old wife again.

I didn't start out here tonight to write a love letter but it would appear that that's what I've done. That's what I'm thinking. Of how much I love him, appreciate him, know that he is truly, as Joni Mitchell once said, "As constant as the Northern Star".
God, I'm lucky.