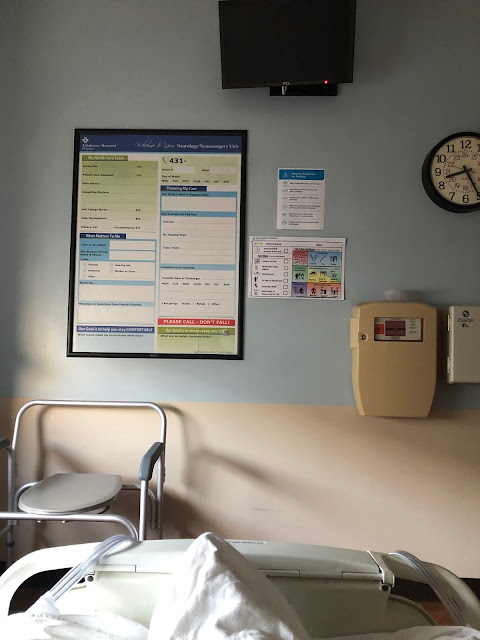 This is where I woke up this morning. I was home soon after but it was quite an unexpected turn of events for me yesterday.

I started having abdominal pain yesterday morning. And it just kept getting worse and worse. Some nausea but not really. And nothing relieved the pain. I curled up on the bed but that didn't help. I walked around a bit but that didn't help. Maurice stuck with me the whole time, wherever I was. My nurse cat. Finally, I told my husband that I needed to go to an ER. And the last time that happened was in 1988 and I had a kidney stone. So you know I felt there was something seriously wrong.

Our main hospital in Tallahassee has a free-standing ER in another part of town from the hospital and that's where a friend of ours who is a scrub nurse recommended we go. And so we did. There was almost no wait-time and there were hardly any people there at all. I was soon in a room with an IV started and blood being drawn and was given pain meds which really did almost nothing. It was severely intense. My poor husband wanted to help me so bad and I couldn't even stand for him to touch me. They suspected...I don't know. Something that didn't sound right to me but then they did a CT scan and soon I was being told that my appendix was the culprit. I appear to have had a very large and very swollen appendix which stretched across my belly farther than it should have been.
Really?
And the ER doc informed us that he had already consulted with a surgeon and that thing was coming out that night.
And indeed it was.

They transferred me to the hospital in a "vanbulance" and by this time I'd been given some morphine and was not in a bad mood at all. As one can imagine. I kept apologizing for being so loopy but everyone was so kind to me and the man who rode in the back of the van with me chatted with me the whole way. You'll never guess what we talked about- Mormons!
It started when he told me the story of his worst pain which was a kidney stone. He was in Africa at the time and had no access to good health care. I asked him if he'd been on a Mormon mission and no, he had not, but a large part of his family IS Mormon.
Haha!
I told him about my Mormon Stories obsession and we had quite a bit to talk about.

We got to the hospital and again, the part I was in was almost absolutely deserted except for staff and perhaps one other patient that I saw. I have to say that if you're going to get emergency surgery, do it at night! By this time it was quite late. The surgeon came in and gave me his little speech. I liked him fine. Our scrub nurse friend had given him a very high recommendation and that made me feel quite relieved. All of the staff were just as nice as could be. There's a different vibe in a hospital at night, isn't there? The anesthesiologist came in and we went through his long form of questions and explanations. His assistant gave me the pre-op meds in my IV, and I have a very vague memory of being wheeled down the hallway on a stretcher I moved to on my own steam and the last thing I remember is looking up at the OR lights and thinking, "They haven't turned them on yet," and then I was waking up back in the area I'd been before and I have little memory of that, surprisingly, although they told me that all had gone well. They did the surgery laparoscopically and I have three different bandages which I'm fairly sure cover small incisions.

Glen had been waiting the whole time in the surgical waiting room which he said was completely empty and they let him come up and see me. He'd had to go through the entire situation without any drugs at all! How unfair!

And then they wheeled me to the room I spent the night in. My nurse was named Mary- second Mary nurse of the day for me. And it was the typical night in a hospital. But I was so relieved to not be in pain and have everything taken care of that I was not bothered. I was able to get up (with assistance) to go to the bathroom and Mary made sure that my pain was under control. It was never that bad. I'd been told that I could go home in the morning and sure enough, by nine or so, I think, I was out of there. The surgeon had come by at 6:30, just getting off his shift, to make his last rounds and he woke me up by shaking my feet which is so like a surgeon, isn't it?
I've been told that I can do whatever I feel like with the exception of lifting anything heavier than ten pounds for three weeks.

Mr. Moon, almost as tired as I was, drove me home and it was so good to get back into my own bed. Maurice resumed her nursing duties. She had slept with Glen the whole night before. 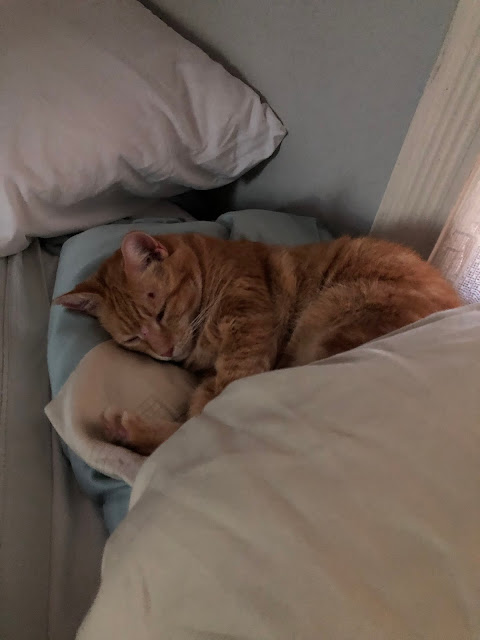 Can you see that she's been in another fight?
That cat.
I've slept almost the whole day while Mr. Moon went back to town to get my prescription for pain meds which I'm not even sure I need and some food and stuff.
He's resting now.
I did fold some clothes and am trying to move around some because I know I should. They pump air into you when they do laparoscopy and it can take a while to make its way out, I hear, causing a lot of shoulder pain. So far I've had none of that but would like to avoid it. Again, our scrub nurse friend said that walking and GasX can help.
I've missed the big Owen, Lily, Vergil, August birthday party today. Mr. Moon did go by there with a card and some money for Owen. He is twelve years old today!
The kids have all offered so much help but we really don't need much, I think. If any. It has been a very different experience for me. I have never had an organ removed in my life. Never a real surgery. I truly have to say that I was treated with such compassion and care in both of the facilities I was in. I was not even in a panic to leave this morning. In a strange way, that little hospital room was quite cozy, even with the bedside commode right there. I am grateful that I did not need it. I am grateful not to be in pain. I am grateful for the fact that we have insurance. I am grateful for the fact that we are close to medical help. I am not grateful that my appendix went out on me but I am very grateful that it is gone now.
I am grateful to medical science. I am grateful for pain meds and compassion.
I am most grateful for my husband, my family, whom I knew were loving me, even when I could not bear touch. Who are here to take care of me if I need it.
I am grateful to be where I can see the sun going down and my chickens out in the yard in peaceful Lloyd.
Love...Ms. Moon
P.S. Please forgive my grammatical errors here. I'm still working through these meds.
Posted by Ms. Moon at 5:50 PM