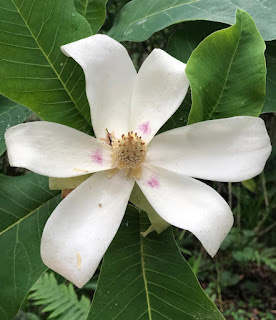 The Ashe magnolia I planted so long ago got knocked back and lost some branches last year when a pecan limb fell on it but enough survived for me to get this bloom. Isn't it lovely? There will be more blooms. These are the slowest growing trees I've ever seen. I planted another one in the front yard and I swear it hasn't grown six inches in a year.
But they are worth it and some day when I am dead and not even remembered, someone will appreciate their beauty.
I hope.

So. Here I am in a completely different situation from the chaos of last night. Not only have the children long since gone home but my husband is off again for his annual fishing week with his sister. They are staying in Apalachicola and I'll go down and visit them for a day or two sometime this week. And so instead of children running around being crazy and me trying to fix supper for all of us and toys and books and crayons and puzzles and games spread out everywhere, it is just me in a relatively tidy home.
Quiet.
Peaceful.
And you know what?
I am fine with that.

I had a good time with the kids. They are good kids. They are indeed my babies. I think back on the time when I took care of Owen when he was just a tiny thing and kept it up for years and then Gibson was born and I took care of him too and I wonder how I did it. But I'm glad I did. Not only did that allow Lily to work part time and bring in money to support her family while knowing that her children were being loved as well as tended, it also gave me a bond with those boys that I believe will always be there. And then of course, there is Magnolia June who reminds me so much of her mother and sometimes she also reminds me of Jessie. I always called Jessie my "project baby" because she loved to move things from one place to another, working industriously to create an order that I did not understand but appreciated. Maggie does the same. She will transfer all of the pieces of a puzzle to a little suitcase and then back again and she loves taking all of the dominoes out of their tin box and then putting them back, one by one in tidy stacks so that they will all fit. This requires thought and patience and I am impressed at the way she can do this. She moved a bunch of books off the shelves this morning and put them in orderly piles on a wooden chest. I think she was making a library of her own. And of course she has that love of her dolls which I recognize myself in. I can distinctly remember sleeping with one or another of my baby dolls or stuffed animals, making sure that my arm was completely around them and that they were covered up, warm and cozy.
Maggie did the same last night with Zippy, holding him close and pulling up the cover to his little chimp chin.
When the chaos was at its peak last night Maggie got out the baggie of rubber bands which she has always loved to play with and left them all lying on the rug in front of the sink.
"Maggie," I told her, "You need to put those rubber bands back in the bag."
"NO!" she told me. "YOU do it!" Then she snatched an apple and ran out of the kitchen.
I sighed but before I knew it, she was back and had put all of the rubber bands back into their baggie. 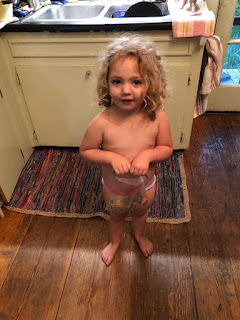 And she was proud she'd done it.

That's my girl.
She was a bit wild after bath time last night. I got on the bed with Owen and Gibson to read them Professor Wormbog In Search For The Zipperumpazoo and The Little Red Hen Makes A Pizza. Because of course we had to read those. And Maggie was like a little frog, jumping all over the bed and running about.
"She gets this way at bedtime," said Owen The Wise Elder Child.
I was determined to get her to sleep in her own bed though and after I kissed the boys good-night Maggie and I went into Mr. Moon's and my bedroom where her bed was all ready and she did get in it and she did snuggle with Zippie and then she did get out of bed immediately.
She needed milk.
She needed a kiss from her Boppy.
She needed...oh, I have no idea.
And I was so mean!
"Magnolia, you get back in that bed!" I kept telling her and finally she faked cried for about thirty seconds, leaning on a closet door and then she got in the bed and fell asleep immediately.
And the true miracle here is that she STAYED IN THAT BED ALL NIGHT LONG!
I couldn't believe it.

So that was how the evening and night went and this morning I made the pancakes. I even remembered to bake a sweet potato last night to go into the pancakes. Once you've had sweet potato buttermilk pancakes it's just impossible to go back to any other kind.

Jason came to pick them all up pretty soon after breakfast and then Mr. Moon left to drive down to the coast, trailering his boat just as a storm approached.
"I ain't scared," he said which is something he always says at times that he probably should be scared. "Don't you close your eyes for a second!" I admonished him.
"I won't," he told me.
And off he went.
I tidied up the house and did some laundry and watered the porch plants and took a nap, falling asleep just as the rain began to fall.

And so here we are, back to the beginning again. Mr. Moon made it safely to Apalach as did his sister. The rain brought cooler temperatures and I am grateful for that. I turned on the AC yesterday for the first time this year and although I give thanks for it when it's needed, I would much rather have the house open. I need to go make myself some supper and I have no idea what I want to eat. I wish I was one of those people who, when eating by themselves just have a bowl of cereal but I doubt I will ever be one.
I don't even like cereal for breakfast.
Maybe for a late-night snack/dessert.

Ah-lah. Despite my nap I feel weary but I do not feel despondent. You know me. I like being alone just fine.