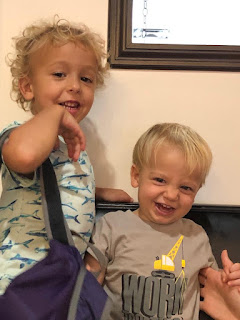 I had a craving for some falafel today and Jessie and the boys met me at a Middle Eastern place and the boys were a bit wild. And funny. They both acted like two little guys who needed a nap but I hear from Jessie that that never happened even though she drove them around in the car for awhile and then took them for a forty-five minute walk. Maybe they just had the devil in 'em. This does sometimes happen, you know.
Still, I enjoyed seeing them.
After lunch I went down to the New Leaf market which is what the Coop is called here. I have been needing some Golden Seal which is the absolutely true herbal remedy that I believe in with all of my heart. I'm not saying that there aren't others that don't work, I'm just saying that Golden Seal always works for me. I use it for wound care and I have seen it do things that are just this short of miraculous. I've used it in treating a gunshot exit wound (yeah, really) and I gave some to a sister-in-law to use on the sores on her legs that because of poor circulation related to some serious problems, would not heal no matter what the doctors tried.
And Golden Seal worked.
I use it on animal injuries too and have some ointment mixed with it in the refrigerator that I keep for chicken wounds.
I went looking for my precious little baggie of it a few weeks ago when I had a gnarly-looking infected ant bite but could not find it. I asked the kids if maybe I'd loaned it to them and both Jessie and Lily reported that I had given them small amounts but not my own bag.
Never did find it and so it was time to replenish.
They don't keep it out on the shelf with the rest of the bulk herbs at the New Leaf. You have to ask an employee to get it for you and he measures it out AT THE CASH REGISTER and yes, it's precious. I bought ten dollars worth today and it'll probably last me for years. It doesn't seem to ever lose its effectiveness. 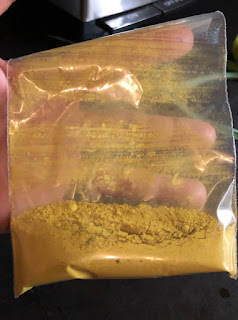 The way I mostly use it is to mix up a small amount of it with some antibiotic ointment. This, I am sure, is as sacrilegious to the alternative healing community as using Kool Aid at communion would be to a Catholic priest. However, this is what works for me and no, it's not the antibiotic ointment alone that does the healing. I've usually tried that on its own before I get out the little baggie. Together they seem to be magic but I think you could mix it with Vaseline and it would work. You need the gooey stuff to keep the Golden Seal on the wound. Just a tiny amount does the trick. When I used it to treat the gunshot wound, I made a strong tea of it and soaked the packing gauze I used in that. I was hesitant at first to do that because this was a serious wound. But I swear to you- within days that wound was healing up like nothing I'd ever seen before. It was beautiful.
Now. Having said all of this I feel I must offer a warning- use the stuff at your own risk. Mr. Moon is allergic to it. I used some on a wound on his foot once and he broke out in an itchy rash immediately. Not that I think any of y'all are going to rush out and buy Golden Seal but still...be aware that some people may not tolerate it.
I don't use it for internal problems although some people do. And by the way- it's the bitterest thing you can imagine. It does not taste good.

So. Speaking of alternative treatments, I ran into a woman I know at the post office today. She told me, "I've been losing weight!"
What do you say to this?
"Have you been trying to?" I asked her.
"I've been putting magnets on my ears! And it works! I can eat biscuits with butter and I still lose weight!"
"Wow. That's amazing," I said.
Maybe I need to get some magnets.

I stopped by the Bad Girls Who Get Saved By Jesus thrift store on my way home today. I felt guilty because I didn't have the children with me but I got over it. It appears to me that the entire store has changed. First off, it's a lot tidier. Secondly, they got rid of a whole bunch of crappy crap junk and seem to have better items. I saw a guy I know there and he said, "Much higher quality now."
He was right.
I got a tea set in the box for the kids. 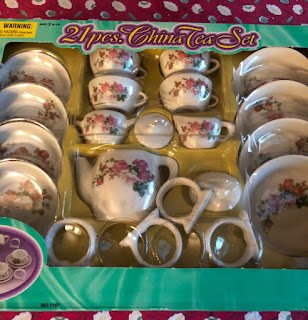 Are those napkin rings?


I also a nice vintagey looking green glass pitcher that will make a lovely vase. 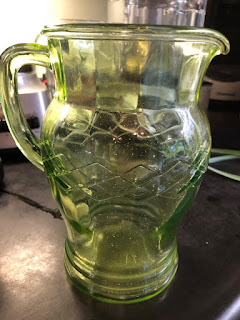 Or could, I suppose, be used as an actual pitcher. It would look good with bloody mary's in it, don't you think? Easter is coming up...

So that was fun. And then I searched out a greenway walking trail that's only about six miles from my house. I've never walked it but I think I will tomorrow.

Mr. Moon was scheduled to get into Tallahassee about 12:01 a.m. tonight. Or tomorrow morning to be accurate. But somehow things have gotten all fucked up and they canceled the flight from Chicago (where he is now) to Charlotte and he's now booked through Atlanta but flights are being delayed (weather?) and who knows when he'll get home?
Not me.
Air travel is just the worst these days. At least here in the US. If you DO get on your plane at the scheduled time, you won't have enough room to sit comfortably or even with any dignity, they charge you for every bag you have with you, you'll be lucky if you get a one ounce bag of pretzels and two sips of ginger ale. Remember when people used to complain about airline food?
HAHAHAHAHAHAHAHAHAHAHAHAHAHAHAHAHAHAHAHAHAHAHAHAHAHAHA!
Yes, they served a meal on most flights. Okay, so it may not have been terrific food but it wasn't bad. And it was food! And it came with real eating utensils. If you asked, the flight attendant would bring you a deck of cards or some magazines. Real magazines, not those in-flight magazines that someone's already done the crossword in.
Also, people didn't wear their pajamas on airplanes but that's a whole other cultural shift that I do not care to address now.
Anyway, I texted Glen and asked him please not to spend the night in the airport. That we are too old for that shit. He texted back that he'll get a room and he'll make them pay for it.
You know what?
I bet he will.
My husband is a force of nature when it comes to such things.

I miss him. I haven't even cut the mulberry pie yet and I think I'll save it all for him. I made him laugh yesterday when I told him that he needs to come home so that I'll have some laundry to do. My beautiful new space machines have been languishing for a lack of laundry. I love my alone time but that is predicated on the knowledge that I do live with someone I love.

It's so quiet in Lloyd tonight. My chickens aren't doing their usual bedtime fussing. Are they already on the roost? I should go out and see. The next-door band is not practicing, the church parking lot is empty. I'll make my solo supper. I bought a few scallops at the New Leaf and I think I'll do something with them and some beautiful cherry tomatoes and a little bit of kale from the garden and some pasta.
Liberace just appeared at the hen house door and walked a few steps outside. I imagine he was checking to see if there were any stragglers he needed to call in. He's a good rooster. He's no Elvis but then again, there was only one of those. Kian even remembered Elvis. He recalled that he was a very sweet rooster.

I hope that by this time tomorrow my husband is home and safe and that I'm cooking for both of us.