Not A Bad End To The Week At All 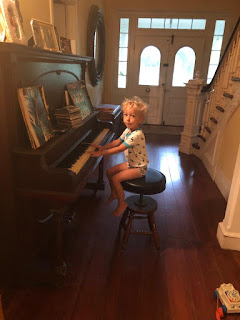 It stormed last night so hard that one huge crack of thunder shook the house, rattled the windows and of course, woke me up.
"Shit," I said out loud.
Didn't wake up August, though. That boy sleeps hard. He didn't wake up this morning until eight which is rare. I said, "Come get in bed with me and I'll tell you a story."
He's a sucker for a story. I don't even remember what I told him. It was just a ploy to get him to come and cuddle for a minute which he is not apt to do.
"Why's it always so warm in this spot?" he asked me, snuggling down.
"Because that's where I've been sleeping," I said.
We chatted for a moment, he was apprised of the fact that Boppy had gone to the gym ("Why?") and then we got up.
And the day began.
It seemed like Jessie and I wandered around all morning trying to accomplish things but not succeeding, mostly just trying to keep up with the boys and their needs. Which was perfectly fine.
A very, very sweet thing happened in that Levon brought me his little shoes, said, "Fip-fops," and "Side" which means "outside."
I put on his fip-fops and then I put mine on and we went to let the chickens out and give them their scratch.
"Aig," he said, pointing to the nest. We found one and he carried it gently all the way back to the house where he gravely handed it to his mama.
A little later I called to him and said, "Levon, come help Mer with the wash."
And he did. 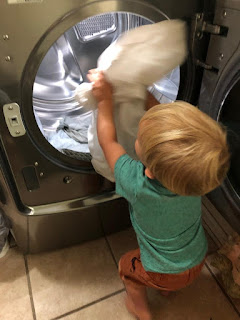 He put the pillowcases in the dryer for me, making sure to stuff them all the way in, happy as a fine little boy can be to help his grandmother.

Eventually we got ourselves together to go into town but not before August asked me if he could sing me a song.
"Of course," I said.
He sat on a chair in the kitchen and began to sing a song whose main lyrics were
I love Boppy. I love Boppy. I love Boppy. He lets me watch TV with him.
There was also a little line about loving me as well because I gave him a bite of cake yesterday but he then returned to the main theme of the song.
Three-year olds.
God, I love 'em.

We met up with Lily and Lauren and Maggie at a restaurant and there's an entire story here about a bloodmobile and Lily giving blood before she ate but no one in this world needs all the details about that. I will say that when August and Maggie saw each other they hugged so hard that they lifted each other off the ground. I did not get a picture of that but I did get a picture of this. 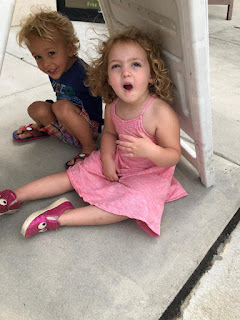 They also got to sit in and pretend to drive an antique troop transfer vehicle which sits outside a barbecue restaurant. We did not eat at that restaurant but the man in charge of the vehicle kindly offered them the chance to sit up in the giant cab and pretend to drive. Here are a few pictures from that. 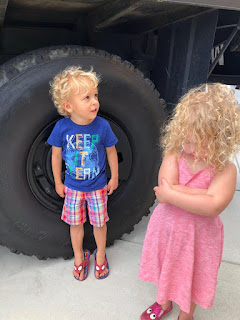 Someone was having a moment while someone else was standing on his toes to try and be as tall as the tire. 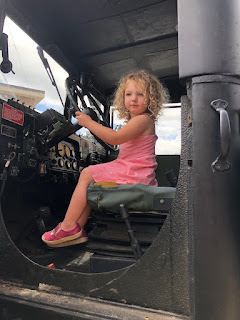 A woman in charge. 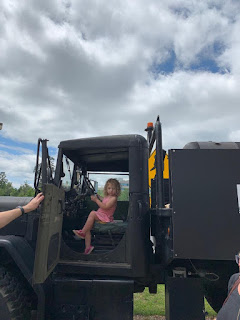 Lauren took this one. Pretty cool with the sky behind the truck, don't you think?

Okay. Check this out. 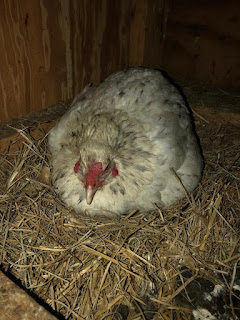 Dang it! Darla's on the nest again. I don't know if Dearie's going to sit on the basket eggs but Darla is definitely sitting on eggs in the nest in the henhouse. I do not feel good about this. Remember when she did this a few months ago? Not one of those eggs hatched and I finally had to throw them out. That lady hen just wants to be a mama.
What to do? Let her sit or take the eggs away from her?
Oh Lord.

Well, it's Friday night. A martini is being sipped. And Mr. Moon just brought me in a present from the garage. He found a lampshade at the trash depot last night and put in his truck to being home. It's a gorgeous lampshade and I have the perfect lamp to put it on. 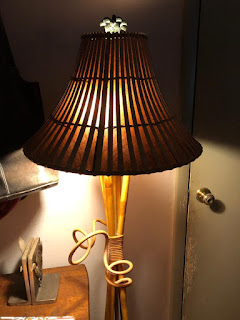 Little strips of bamboo over a cocoa-brown silk lining with a palm tree finial. I got that lamp years ago at the Bad Girls Get Saved By Jesus thrift store and by golly, the lampshade looks like it was made for that lamp.

And that's the news from Lloyd. Jessie and her boys went home after Costco as Vergil is flying in late tonight. Mr. Moon and I have spent at least half an hour telling and retelling stories of the sweet and funny things that Levon and August did and said while they were here.
Let me sum it up- they love Boppy.
Yet more proof of their intelligence.