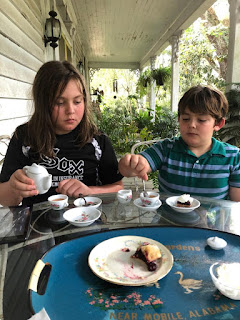 We had a tea party on the front porch with mulberry pie, whipped cream, and real tea. With a great deal of sugar stirred in. Of course the entire sugar-bowl's worth of sugar would hardly be enough to sweeten one real cup of tea.

I'm afraid the day hasn't been nearly as exciting as the children had hoped. No ponies, no bounce house, no magic show.
Just old Mer's house with eggs to look for and the bamboo jungle to explore and Wii to play and puzzles to dump out (all 750 pieces) and put back in the box and baby dolls to play with and Jack the Cat to pet and a porch swing to swing on.
Right now Gibson is drawing pictures, Maggie is playing with something in the Glen Den and I do not know what Owen is up to at the moment. Last I saw him he was eating carrots he'd picked from the garden. I do know that he wants to watch The Great British Baking Show while we eat supper which charms me. Good thing he ate some carrots. We're having pizza and roasted broccoli for supper and he claims that broccoli is the devil.
Maggie and I have made up her bed right beside our bed. She seemed to be excited about that but I think there's probably about a .01% chance she'll actually sleep in it.
"Cuddle me, Mer!" she will say after she's climbed into our bed.
I could be wrong.
She's taken off her dress and is running about the house with nothing on but her underwear. This is what children do. At least the children I've known and loved. With that head of tawny curls she reminds me of a sleek little lion. 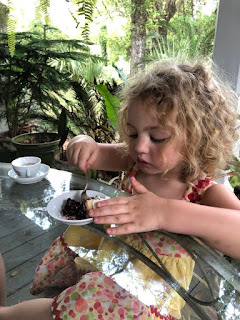 A lion who likes pie and tea and whipped cream and baby dolls and kitty cats and cuddles. Who claps her hands two times together when she is satisfied with something or making a point, a quick, crisp exclamation of approval.

Time to get to the evening portion of our programming.

This is what Owen was up to. 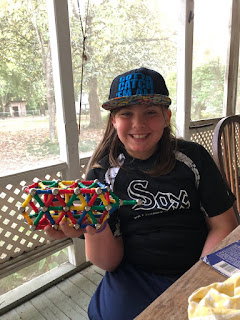