A Day Involving Many Perfect Perfections 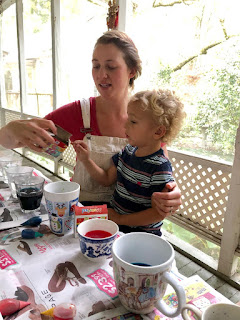 It has been a most interesting day.
Well, for me.
When I woke up this morning it was raining gently and just starting to get windy. Soon we were getting huge gusts of wind that twisted the trees and bent them and I heard snappings and crackings and sure enough- quite a few branches fell. As always I wondered if I was risking life and limb by hanging out on the porch while all of this was going on. Were there tornadoes? My neighbor who always calls me to warn about tornadoes is out of town and the reports online seemed to be mixed on that subject. But I just stayed where I was and watched the craziness and thought about how much I dread hurricane season.
But beside the branches and a few things flying off of tables or counters in the house where doors were open, no harm done and the rain never did amount to much.
Still, it was a foretaste of things to come.
Lily lost power for about three hours and shockingly, I never did. I was very grateful for that.

After things had calmed down Jessie came out with the boys to dye Easter eggs. Before we got started though, August went to the trash depot and the post office with me. It's so funny- he totally has a ritual about this now. He sits on Gibson's old booster seat and he has a pile of books that he "reads" for the entire one and a half block journey there and back. Those books stay in the car and are always ready for this Mer and August adventure.
See how exciting my life is?
But I tell you what- some day I am going to look back on these trips to take the trash and I am going to miss them. 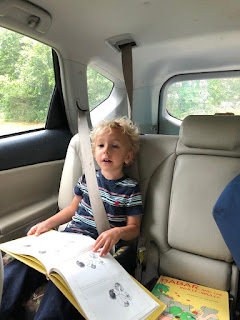 Levon seemed thrilled to be in Lloyd. He went straight for the Glen Den where he pulled out a small child's chair, set it in the middle of the room and just sat on it. 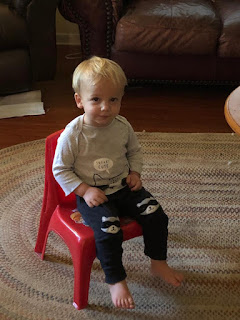 I have no idea what the little guy was thinking but he cracked Jessie and me up, seeing him sitting there, taking in the sights. After a few minutes of hanging out like a dude, he started pointing to the fish replicas on the wall. 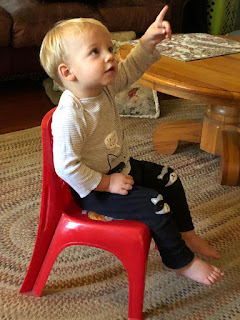 "Fish," he said. He's a good talker, that one. Look at those little feet. Can you stand it?
After awhile he and August dumped out all of the toys in the toy basket and then the fun really began. Levon brought me two bouncy balls and when I bounced and caught both of them at the same time he laughed so hard I was afraid he was going to break a rib. He was thrilled!
Then there were books and then there was lunch and then we set up the table on the porch for egg dying.

Jessie and I both agreed that dying Easter eggs is just about the best holiday ritual there is. If not THE best. First of all- eggs are perfection in all ways. Perfection and magic. Their shapes, the way they feel in the hand, as if human palms were designed specifically to hold an egg. The way each egg delivers a perfect protein and which is also quite possibly the most versatile food source on the planet. The way that a hen can lay a clutch of eggs to sit on for three weeks and at the end of those three weeks, tiny bits of perfect fluff peck their way out of the eggs with their egg tooth which probably evolved with the dinosaurs, emerging already knowing how to peck and scratch for food, how to follow Mama, how to heed her calls, how to make their own chirping cheeps so that she always knows where each of her young'uns are.
Take all of this and add color to eggs and if that's not beauty, I don't know what is.
We filled up mugs and cups with boiling water and vinegar and food coloring and we just had the best time. 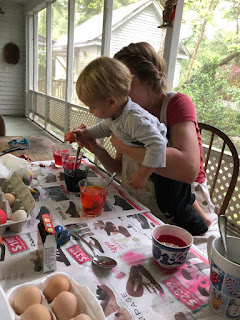 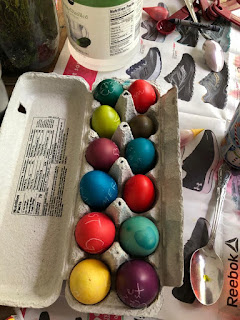 I kept saying, "Isn't that the most beautiful shade of blue you've ever seen?"
Or purple. Or green.
Sheer beautiful perfection.
Sigh.

Both boys ended up with dyed hands. Levon especially found this interesting. He kept holding up his little hands and looking at them in wonder.

While all of this was going on the weather went from being beautiful and sunny to looking like it was about to storm again, over and over. And the temperature began to fall, slowly but inexorably and as I write this now, it is once again cool and feels so fresh and occasionally the wind stirs up the leaves again and makes the wind chimes tinkle out a few pretty notes.

I went to Publix after Jessie and the boys went home and bought all of the rest of the stuff I need for Sunday. Tomorrow I plan on doing some tidying up and making the greens and the marinated carrots which is what I am choosing to call those things because "copper pennies" sounds foul as pertains to food. I looked in one of my old church cookbooks and lo and behold, there are three recipes for these in it. 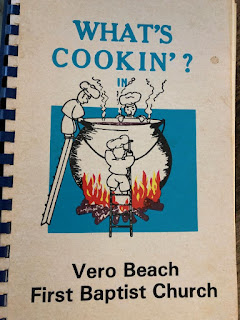 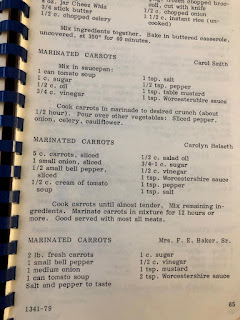 I'll go through my other homegrown church lady cookbooks tomorrow just for the thrill of it. The recipes all seem very similar. I will probably not be using the entire cup of sugar that these old cookbooks call for but I may well use the canned tomato soup just because that's a constant in all of the versions. And here's one of my guilty secrets- I make a very, very fake beef (or venison) stroganoff with a can of tomato soup in it and I fucking love it.
Let's face it. Campbell's tomato soup is just damn good. It ain't gourmet but it makes me happy.
Occasionally. And Publix had Campbell's soup on BOGO which of course I took as a sign.
A Holy Easter Sign of what the Christian god would want me to use.
Am I right?
Of course.

And it being Friday, I have clean sheets on the bed. August helped me make it up.
"I am very strong," he said as he tugged the fitted sheet at the corner. He seems to be a little bit obsessed with strength these days. When I was tugging the trash bag out of the kitchen trash can he said, "Mer, you are strong."
And then he proceeded to tell me that I am old.
"You can be old and still be strong," I told him.
And that's true. Or at least sort of true.

I'll leave it at that.

Happy Day They Crucified Our Lord.