Turns Out You Can Laugh Too Much 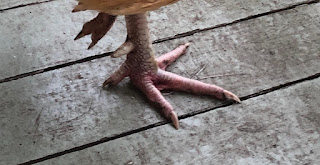 I sent this picture to Lily and Jessie today with an accompanying text saying, "This is an actual photo of my foot."
I wanted to go get a pedicure. I haven't had one in practically forever due to the fact that the toenail that I ripped off in the bathtub in the overall-hardwear-related incident has taken this long to grow back. But it finally has.
The three of us spent approximately four lifetimes texting back and forth about various options and details concerning getting a pedicure and this involved schedules and child care and all that stuff until finally we resolved it all in an unsatisfying manner. Jessie and I would go and Lily would work.
I picked up Jessie and got to see the boys and I read August two books and he showed me his bunk bed for about the tenth or so time and showed me Slothy, his stuffed sloth whom he sadly proclaimed to be sick. Levon showed me his tractor. A lot.
While we were getting our pedicures, Vergil was going to take the boys on a bike ride so we helped them get all loaded up. Vergil has a very, very cool bike to take his sons on rides with. 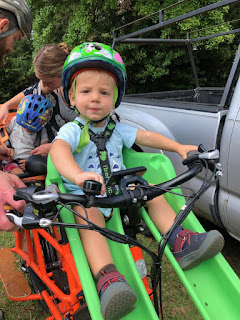 This boy. When you kiss him good-bye, he puckers up and after you smack him on the lips with your lips he says, "Ta-too" which of course means "Thank-you."
I can't handle it. 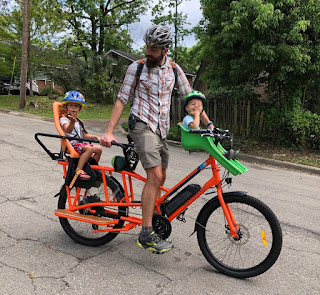 Throwing us kisses before they took off.

We went to a nail salon that Jessie had been to before. It had a water feature that she liked. 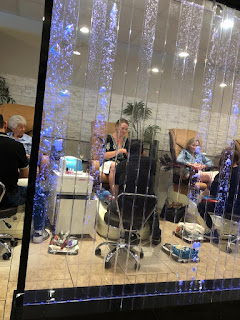 I liked it too. It was mesmerizing, watching the little cartoonish bubbles rise to the top and disappear.
I ended up sitting next to Jessie where that lady in the blue shirt is sitting in the picture. And all was well. We both had very nice guys working on our feet. I always feel so fucking entitled when I get a pedicure. First of all, it's ALWAYS a person from another country who is giving me the pedicure. Secondly, they are required to touch my feet which are always so nasty. They look exactly like the feet of a sixty-four year old woman who goes barefoot half the time would look like. Also, I get terrible calluses on the backs of my heels. But I try to restrain my guilt and always tip very, very well. And then enjoy it all as much as possible. This includes the massage function on the chairs they always have. But today my chair seemed to be totally out of control. No matter what I set it on, that thing bounced me back and forth so hard that I was embarrassed.
No. Really.
And then, I happened to look down the row of chairs and there was another old woman whose chair was doing the same thing and she was rocking and rolling and I started laughing and before I knew it I was in the middle of that sort of inappropriate laughter you usually get in church and I could not stop. I don't think the lady noticed. I hope not. And I wasn't really laughing at her. I was laughing at the situation we were both in. I laughed so hard that both my nail tech AND Jessie's asked if I was okay.
"I'm fine," I managed to sputter. "Just fine."
And I gathered myself together and pulled myself together and finally quit laughing. And I turned the massage function off of the chair entirely. I wouldn't mind having one of those chairs to use in the privacy of my own home but I just could not deal with being bounced around like that in public.
And now I'm laughing again.

But it was all great fun and my feet look brand new. 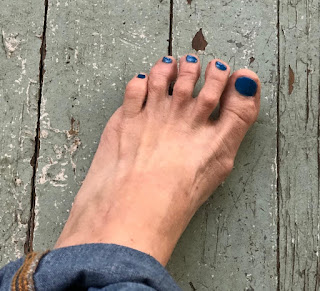 Here's one of them. I actually have two. Can you tell that I wear flip-flops when I'm not barefoot?

So it's been a rather jovial day except for the part where I went through an old dresser to weed and pare the contents. I had some of my mother's things in there and it did not bring me pleasure to go through them. I still have her purse and wallet and it just seems so weird to throw those away but honestly- would I want my kids to keep my purse and wallet around? I'd want them to use the purse if they wanted to but the stuff in my wallet? Throw that shit AWAY! Mom's jewelry box was also in there and I went through her jewelry again. Mother loved to travel and she bought very inexpensive jewelry on those trips which represented the places she'd visited. I don't want those things and neither do my kids. But most are silver and I can't just throw them away. I texted one of my brothers to ask if his daughter would like her Granny's jewelry box, pre-loaded with some jewelry. He wrote back that she very much would. So that's good. There are papers I need to throw away. There's an actual receipt for the services of the moving van that she used when we moved to Roseland from Chattanooga in 1960 which lists all of her earthly possessions. Anyway, none of that was very jovial but I did manage to clear out drawers and make a donate pile of some sheets and pillow cases and silver-plated platters as well as a bag to take to the trash depot. Now there is room for quilts and blankets and that feels good.

I've picked more mulberries and I think I will definitely be making a pie tomorrow. Mr. Moon has been texting me from the Auburn game and he is so happy.
I am happy too.
It feels good to just flow with the day as it comes, being lazy and doing little chores that I normally would never feel as if I had time for.
Which is ridiculous.

Here's the picture I sent my husband last night when we were telling each other good-night. 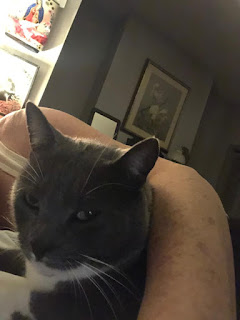 "He looks like he's telling me to stay in Chicago," Mr. Moon texted back.

Jack may think he's the man but I know he's just the neutered male cat. I won't tell him that, though. His purring brings me too much comfort for me to want to hurt his feelings. And aren't we supposed to believe that it's what we think about ourselves that's important?
If so, Jack is one hell of a manly man cat.
And Maurice thinks she can kick his ass.

Sometimes belief just is not enough.
But that's a whole other post.