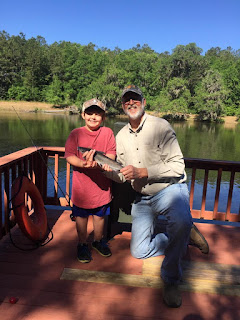 The Florida Fish and Wildlife Conservation Commission held a camp today for young'uns and their adults and Mr. Moon took Gibson. There was archery and a shooting range (BB guns) and there was fishing. I think there were some other things too but Gibson really enjoyed the fishing. He caught four catfish! It was catch and release so no one's eating catfish for supper but that's not always the point of fishing, is it? And his archery and BB gun skills were awesome, I hear. I was so happy that Glen spent that time with Gibson. He's such a good grandfather.
As we all already know.

While they were out doing wildlife stuff, I stayed here and did homelife stuff. Taking trash, going to the post office, washing clothes, hanging them on the line, and then I did a little garden work. I was still in the garden when Mr. Moon and Gibson showed up and I worked a while longer. It really struck me today that my days of determining what I am going to accomplish when it comes to outdoor work are over. I can decide whatever I want before I get started but the honest truth is- I can only work for as long as I can work and then I have to stop even if I haven't gotten nearly as much done as I'd like.
And so it was today. I had great plans to get a lot done but in reality, all I did was weed the cucumbers. We have a horrible plant here called dollarweed and it propagates via seeds, rhizomes AND tubers. In other words, it's crazy hard to control. I am not sure it can actually be done.
But there's part of my garden that it just thrives in and it has almost choked out my poor struggling cucumber seedlings so I did my best to pull up what I could, trying as I went not to disturb the cucumber roots as I tugged at the dollarweed roots.
It's pretty much a futile effort but I fucking made it anyway.
I will report that the weird burning pain in my upper shin/lower knee seems to have dissipated quite a bit. I'll probably never know what that was.
After I came in I played some Battle with Gibson. He wasn't too impressed with that game. Owen loves it but each to his or her own, right? Gibson wanted to play the matching game, which we did. He won.
Of course.
And then he read a book to me. I am so impressed with his reading ability.
His mama came to pick him up with her friend Edie and Edie's son Gabe and Magnolia. They had all been to Pride Fest in Tallahassee and were dressed for the occasion. Lily said, "We saw everyone."
I'm sure they did. We have quite a few beloveds in the LGBTQ community. Here's a picture that Rachel posted on Facebook. 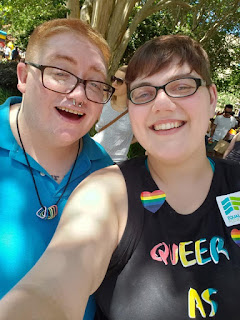 I see that Hank is wearing the freedom ring necklace that he's had since...forever? When he first started wearing it, it was quite a bold thing to do. I sure am a proud mama. Hank was the very first out gay kid at his high school. I know I've said this here before but I will tell you again- he was on Oprah when he was in high school for being gay...and bullied. His bullies were there too.
Guess what?
They're now out. They were and they are gay.
Dear god I love living in a world where queer kids can be themselves and see a future where they can grow up and marry the person they love if they choose to do that. I have been educated about love in ways I never would have if I hadn't had a queer kid. Hank and his friends have taught me more about strength and bravery, not to mention style and tattoos than I ever would have known without that experience. Trans kids, gay kids, bi kids, great kids, strong kids, amazing kids.
Well, men and women now.
And I'm under no delusions that the world is a safe place for these people I love.
Love may be love but hate is still hate and we do live in a world where ignorance fuels hatred, and where people who are "othered" are in far more danger than any of us mamas want to think about.
But today was a day to celebrate and although I didn't go to the festival, my pride in the LGBTQ community is immense. They humble me.

Wow. I didn't really mean to go off on that tangent but I did and I'm glad.

In other sadder news, I haven't seen sweet Dearie all day. I have not found any trace of her and if I were being quite optimistic, I would think that perhaps she's off on a nest somewhere and that the basket of eggs she's laid was a diversion.
Or something.
But I don't have a good feeling about this.
Dammit, Dearie! Why wouldn't you sleep in the hen house instead of in a tree fifty feet above it? She's not a big chicken and a hawk or an owl could take her if she was asleep.
Well, there is always hope.

I'm making pizza for supper. I'm pretty excited about this. I love to make pizza. I remember when I was a kid and I used to make pizza for my family from this kit. 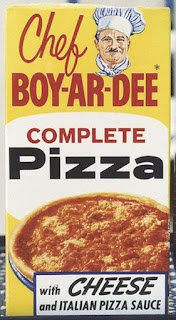 Pizza was still a pretty exotic thing in Winter Haven in the late sixties and early seventies. I think there was one place that made it. There was certainly no delivery. And even though that box contained ingredients that were suspect and most assuredly not very traditional, I took great pride in producing pizza from it. And my brothers loved it.

Right now I have plum tomatoes roasting in a very slow oven. 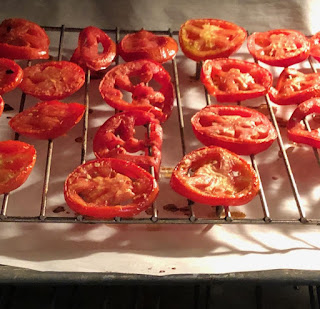 I have dough rising for the crust. There will be SO many vegetables on our pizza tonight. I am very much looking forward to it.

All in all, it has been a very fine day with the exception of Dearie going missing. One of those days that make me truly able to feel the amazing amount of goodness in my life. I am so in love with my husband, that good kind man who takes care of all of us, who loves his grandchildren, who still holds me tenderly in his arms. I have everything I need and a lot of things I just want. I have this old house, this yard, and people whom I love and who love me. The confederate jasmine is blooming 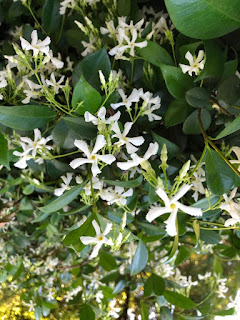 and those tiny whirled pinwheels of blossoms are making the very act of breathing a hedonistic, swoony delight. The setting sun is painting my tiny world with gold and for the moment, at least, my heart is at peace.

As I so often say, I would wish that for all of us.