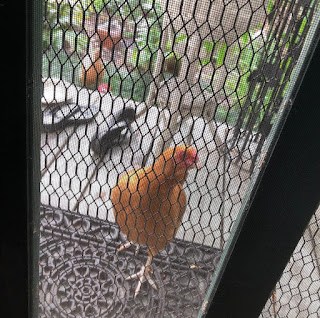 Yes, yes. I went away and now I am back.
Short trip, eh?
I meant to post on my phone last night but that turned out to be complicated and I just wasn't doing complicated so I didn't. It would appear that the world has not come to an end although there is that thing about the pig brains being brought back to "partial life" after they were dead for four hours and that may be a sign of impending doom. 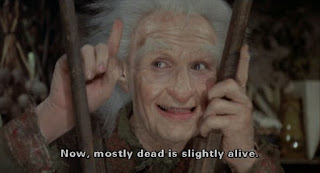 Who knows?
Not me.

Anyway, I always go over to Apalach for a day or two when Mr. Moon and his sister are having their fishing week and it appeared yesterday morning that it would be a good time to make that little journey. The fishing had been nonexistent due to weather as I had said before, and they had made plans to drive over to Biloxi to do a little gambling on Thursday and then of course this coming weekend is the ritual eating of the ham celebration which I need to prepare for so there you go.
I packed up and hit the road and had a lovely trip to the coast. Everything is so green and the giant magnolias are blooming and it was cool and I had a wonderful time just being leisurely and pissing off the drivers behind me by only going the speed limit.
I stopped and ate my lunch at a picnic table in the shade after ordering here. 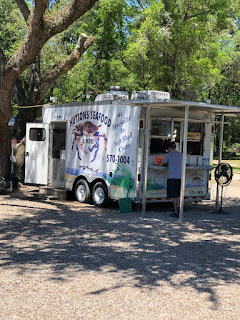 I've passed that little food truck a million times and never stopped but yesterday I did. I got what they call a "shrimp burger" which is about six fried shrimp on a hamburger bun with lettuce and tomato and tartar sauce and pickles. I added hot sauce.
It was perfect.
And the lady in the counter window called me "Sweetie" which did not offend me in the least but in fact, made me smile.
Good iced tea, too.
I drove over rivers and through woods and past little villages and thought about how beautiful this area is. It's got its faults and that I will freely admit. You do sometimes catch sight of a confederate flag and billboards like the one I saw that said nothing more than WE LOVE YOU JESUS! but there are also probably more mixed marriages in that area than anyone could believe. This is may be due to the fact that everyone of similar skin tone is related to everyone else of that skin tone and so intermingling the genes (and skin tones) is a good idea.
Well, at least that's my theory.

I got to Apalachicola and Mr. Moon and his sister were waiting for me to go look at a house for sale. I really do NOT want to go into the whole thing about whether or not we're going to build a house on our property so let's just say that we're weighing options. Buying an existing house is one of those options and there is something to be said for acquiring a house that we could start using immediately. The siblings had already looked at it from all angles and peeked in the windows but they politely waited for me to meet with a realtor to go inside it.
It was cute. Built all of wood inside, some of which had been blasted down to its original wooden woodiness. Which I like fine. Smells good. But the lot was only big enough for the house and a bird feeder and a few plants and some bricks and that wasn't great. And most of the rooms were tiny, as rooms built back in those days had a tendency to be. And there was a second story but the steps up to it reminded me of the steps on the pyramids in the Yucatan except a lot narrower and the kitchen was neither practical, roomy, or charming enough for one to forgive the impracticality or lack of space.
So, nope.
The realtor was an interesting guy. Liked to talk. A lot. In fact, he told us stories about people that I felt a little bit uncomfortable hearing. Like...not my business. Nothing vile or slanderous but still, a little over the top for me.
So that was that and eventually we all went out to supper and because the weather was so beautiful we were able to eat outside. 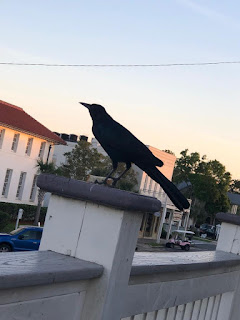 That bird snatched a piece of bread off a table after the people who'd been eating there left and carried it over to that post to eat before the server came back and chased him off. We were amused. And the food was delicious but I ate way too much and thank god we only had to walk about forty feet back to where we were staying which is a beautiful place with a kitchen bigger than the one in the house we'd looked at. I could actually live quite happily in this suite. 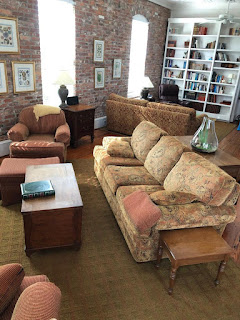 The building was originally a warehouse right on the river from when Apalachicola was a major shipping port for cotton and other goods. This was before roads or railroads were built in this part of the country and it was a booming town. It has quite the history. Now it's mostly known for its beautiful old homes, its seafood industry, and tourism.

We were all so food-stunned when we got back from eating that we weren't capable of much more than sitting on those couches. I started reading a back-issue of the New Yorker and found an article that absolutely blew my mind. You can read it HERE.  There's an audio option too.
It's about the discovery of the amazing record of when the massive Chicxulub meteorite hit the earth about sixty-six million years ago. I'd read brief articles about the finding recently but this article went into far more detail and I'm still boggling about it. If you feel the need to put everything into perspective right now (and who doesn't?) I suggest you read the article too. It's fascinating. Really, I can't say enough about it but perhaps I am just one of those people who never outgrew her love of dinosaurs and fossils and the mysteries of our planet.

This morning, despite the fact that last night I had vowed never to eat again, we went to the Mexican restaurant in Eastpoint that serves breakfast and I always enjoy that.
I wish I didn't love to eat so much.
And then I did a little Apalachicola shopping and here's the best: 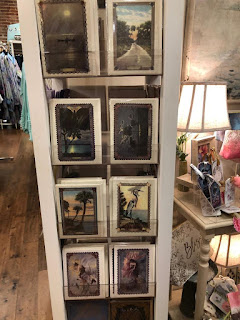 My beloved Lis's cards being sold in River Lily which I always refer to (completely without irony) as the best shop in the entire southeastern portion of the United States.
Because it is.
They only sell the BEST things at River Lily. And that is all I need to say about that.
I also went to the bookstore which I love so much. I was so glad to hear that they did not get one drop of water in that beautiful old building during Hurricane Michael. A lot of places in Apalachicola had a great deal of damage from that storm. Not like Mexico Beach or some of the inland towns like Blountstown and Marianna which were completely devastated and which have not yet begun to come back (thanks, FEMA!) but enough damage that some buildings were destroyed and some of the oldest businesses in town are no longer operating.
But the bookstore is good.

And then I kissed my husband and hugged my sister-in-law and we laughed at my conjugal visit and I came on home where my chickens seemed glad to see me.
I am glad to see them too.
I've seen Jack but I haven't seen Maurice. She always gets so pissed off when I leave. She'll show up eventually.
I've unpacked and have a load of clothes going and I collected thirteen beautiful eggs and have the sprinklers on in the garden. I also picked what I'm going to make into a very simple brothy soup with a few dumplings for my supper to try and make up for some of my gluttonous sins. 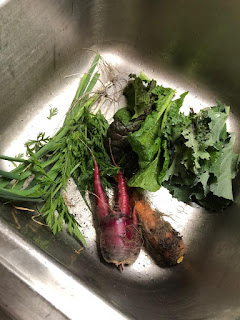 So. Home again. I enjoyed my time in Apalachicola and of course I loved being with Glen and Brenda but oh, how I love my funky old house and my own kitchen and routine and bed and critters. And tomorrow I plan on seeing some grandbabies and kissing them until they scream at me to stop.

I am a home girl at heart and in soul, too.