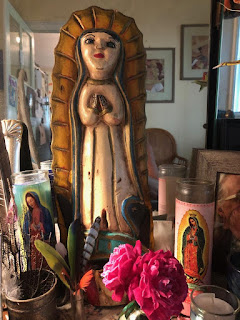 I really used to be into little altars. I put thought and effort into them. Some of them were just general spaces with treasures and things I loved and some were created for specific purposes. I think of those days as my pagan days.
Or something.
I don't think I ever really believed in any sort of healing or intentional purpose coming from those altars except in the sense of the concentration of my own thoughts with objects that represented them. Candles were indeed lit sometimes.
These days...not so much.
As I become older and my intense dislike of religion grows ever deeper I now disdain any sort of magical thinking and that goes from believing that a loving god listens to prayers to believing that the universe is conspiring to give us what we want.
I have as much disdain for Oprah and her Secrets as I do for Scientology.
But hey! Whatever makes you feel good and brings you comfort, right?
And some of my little altars still bring me comfort. And make me feel good.
The one above, which has been pictured on this blog at least a hundred times, is in my hallway. I pass it many, many times a day and I try to keep fresh flowers on it because THAT makes me happy. Those pretty red roses smell like heaven and I am glad to have them there today. I've added a wisteria bloom since I took that picture- one of the very last- which I discovered when I was out kicking bamboo. There are pictures of my children and there is a jar of Cozumel sea glass that Glen and I brought back from a trip we took decades ago. There are seashells and turtle shells. There is the tiny silver mug with my initials engraved on it that someone gave my parents when I was born. There is black coral which I illegally brought back, also from Cozumel, that I found on the beach, washed up from deep and secret depths. There are candles. There are feathers.
Today Hank and Rachel brought me some feathers that Rachel had collected a long time ago. You can see them in front of my beloved Mexican Virgin of Guadalupe. I put them in the broken neck of an old bottle I found outside over by the goat pen. I knew I brought it in for some purpose instead of just tossing it back to the ground.
And so I did.

These are the sorts of things that anchor me. No matter how far I drift or what my state of mind is, these objects represent parts of my life that the memories of bring me great pleasure.
But they are just stuff, no matter what meaning I invest in them.
And I know that.

Yesterday when I decided to ask my brother if his daughter, my niece, would like her grandmother's jewelry box a great yearning came over me to see him. Since our mother died, things have just been weird and although this brother and I have had a deep and abiding relationship since the day of his birth when I was twelve years old, we have not seen each other very much at all. And I have not seen his two children in forever.
Or, well, at least since Mother died.
And he is my only sibling who lives in Tallahassee.
So yesterday when Chuck and I were texting, I told him that Jessie and the boys were going to come out today and maybe he and whoever might want to come out too. We left it loose and it ended up that Hank and Rachel wanted to come out and to my great joy, Chuck said he'd be coming with his son Kian.
My nephew.
I've written quite a bit about Kian and his sister Riley. They used to stay here sometimes when they were little. They loved it here. If you do a search at the top left side of my blog for "Kian and Riley" you'll find quite a few posts about them when they were little. Here's a few pictures I took back then. 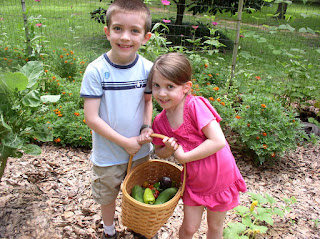 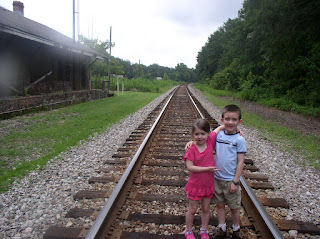 They were like my practice grandchildren, just as their father had been my practice baby.
Like my grands now they would spend the night and take baths in the giant bathtub and want pancakes in the mornings. They loved gathering eggs and vegetables and walking to the post office and seeing the railroad tracks.

So seeing Kian today was just lovely. And seeing his father made my soul feel like, "Oh, there he is," and I felt as if no time had passed at all since the last time we met up.
I felt so easy with both of them and August was happy as can be to meet them and he fell in with Kian immediately. Chuck, who has worked in childcare for thirty years squatted down to talk to him and August felt seen and appreciated. "Excuse me," he would say, and I would say, "Yes?" and he would say, "No. I'm talking to that man."
And he'd proceed to tell Chuck whatever was on his mind.
And Hank and Jessie were happy to see their uncle. We all went out and picked mulberries and ate them which was a good ice-breaker. We all had purple mouths and fingers where the sweet berry ink stained them. 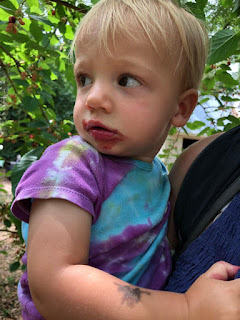 Kian walked about the house and relived some of his childhood. He is seventeen now. Taller than his dad. Taller than me, for sure.

We all went to the Hilltop for our lunch which was as delicious as ever. Here are Kian and August. 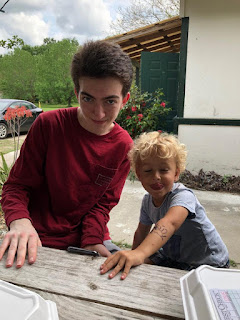 Rachel wooed Levon with much chasing and merriment and the little guy laughed so much. We all talked and laughed and caught up. Chuck and I even got some alone time before lunch and that was precious to me. I hear that Riley really wanted to come out too but had too much homework. She has a boyfriend! I want to see her so much. I hope she likes her Granny's jewelry box.

After lunch there were several southern good-byes. First in the parking lot of the Hilltop and then in my yard.

It was, for me, a completely beautiful day. And dammit, I am not letting the umbilical cord of my relationship with my brother get so tangled again. He is too much a part of me and my life and like the objects on my altar, the very sight of him brings me joy. And although Kian and Riley have great relationships with the many, many wonderful people in their mother's family, they are part of me too and this side of the family is a whole other wonderful root of their family tree.

No. I never got the corn or black-eyed peas planted and no, I did not de-stem the many mulberries I want to bake into a pie but all of that?
Just stuff.

I wouldn't trade this day for anything.

I got to hang out with my brother. And his darling son and some of my kids and a few of my grandkids.

I have no tidy ending for this post. I have a feeling that very little in life has a tidy ending. There are always complications and unexpected situations and circumstances and fine and fancy dances. There are rainstorms and brainstorms and oh my god but there are tears and there are fears!
And yet.
And yet.
If we love, if we just keep loving, there can be such unbelievable sweetness.

I may not believe in much but that I do believe.

I hope you've had a good day too.