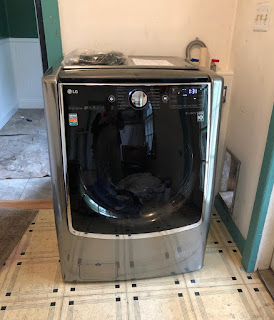 Is it a washing machine or is it a space ship? Is it a household appliance or is it a teletransporter?
Well, the instruction manual only covers the doing of laundry in it so I suppose we should trust that. And I have broken it in well and truly. I don't even know how many loads of laundry I've done but I will tell you that my iPhone health app claims that I've walked three miles today and that's 99.9% all from being in the house. My dryer is still in the old laundry area so each load must be carried in there to dry. It's not that big a deal. I'm getting those steps in, people! And it's already so nice to have the flat top of the dryer to fold on. We haven't figured out the arrangement we'll have in the new laundry room as to flat surfaces and storage areas but it won't take much to make me happy.
This is, without a doubt, the largest washing machine I've ever owned. Let's just say that washing rugs is not going to be a problem. In fact, I have a load going right now with two of them plus a pair of Mr. Moon's overalls. And I could have gotten three more towels in there easily.
But they are all already washed.
And folded.
And put away.
Oh, what a good little housewife I've been today!
After the guys came to deliver the machine the floors were pretty tracked up with the mud and dirt they brought in with them. It's been drizzling off and on all day which makes for messy conditions. So when they left I finally got the kitchen and that bathroom and the former laundry area mopped. I did it twice because once would have been a joke. If I'd done it three times I still would not have eaten off the floor but come on- who really eats off the floor?
Oh well. Babies. Sure. But they need all that dirt for their microbiomes. It's science.
I've also cleaned the coffeemaker with vinegar and done some ironing.
And made up the bed with clean sheets.
And picked some greens to go into our corn chowder tonight.
From now until all of those greens are bolted and pulled, we're going to be eating them in one form or another with every meal.

So. I am tired. Exhausted. But contented.
And very, very happy to hear that Mick Jagger does not appear to have a treacherous disease but instead needs a heart valve replacement. Or, heart valves. I don't know. And yes, of course this is serious but he's in great shape and should recover well. I've said more than once that Jagger may be the world's greatest athlete and I'm not kidding when I say that. James Brown might have once been the hardest working man in show business but he's dead and Mick's definitely not. I suppose we need to give a nod to Bruce Springsteen as well. His shows last for hours and hours and he's not just sitting up there on the stage behind a mic with his guitar. That man moves too.

And I suppose that's all I really need to talk about tonight. I don't want to discuss politics or religion or the meaning of life. I just want to be grateful that I have a washing machine and that we're going to have at least a tiny bit of cooler weather and some more rain before the unbearable heat of summer blows in like a blast furnace. The mulberries are starting to ripen, my fig tree is going to get so much more sun this year since that beautiful old oak passed away, and I'll have clean sheets when I crawl into my bed tonight.

That'll do for now.