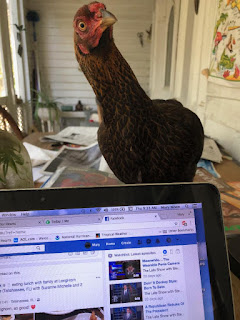 Excuse me. Isn't it time for you to go throw the scratch?

Because Dearie sleeps in a tree rather than in the hen house, she is outside and roaming before the other chickens get out in the morning. I do not mind her on the porch because I have so much affection for her. She lets me stroke her soft feathers and is completely comfortable with me. 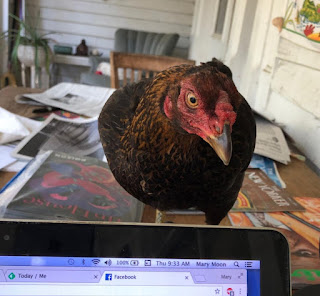 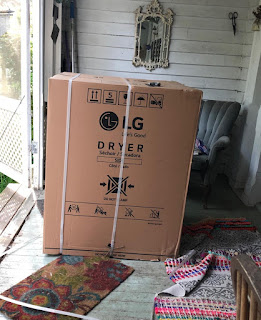 In a non-amazing turn of events, my dryer quit working last night. I don't know about you but I suspect collusion.
That's right.
Collusion between my old washer and my dryer. What else can explain this?
My husband was on it, though. He took the truck to work this morning and called the woman we always deal with at the appliance store. She was quite happy to get rid of the dryer that was the other part of the pair with the washer we bought last week. Not happy enough to give it to us but happy nonetheless.
And as we SPEAK, the dryer is drying. Mr. Moon is heading to Minnesota tomorrow to meet up with his old Auburn basketball teammate to watch that tournament thingee Auburn's playing in. So he needed clean clothes. And he wanted to get my laundry situation all squared away before he left because he's that kind of man.
I'd show you a picture of the new dryer but it looks just like the new washer so what's the point?
Right now the dryer's in the spot where the old dryer was in the old laundry area because the wiring  isn't quite finished in the new laundry room. When we move that thing in there it's going to look like a space command center.

I took my first real decent walk in quite awhile this morning.
I almost died. 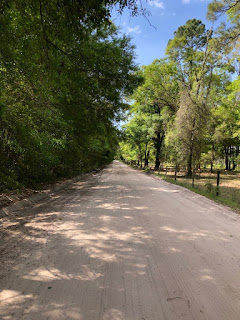 I drove down to Farm Road and parked at the north end and walked from there. I love Farm Road although it's almost all uphill going north to south. But of course that means that it's almost all downhill from south to north.
And it's pretty as can be. 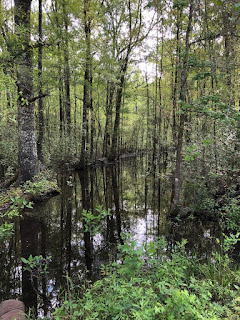 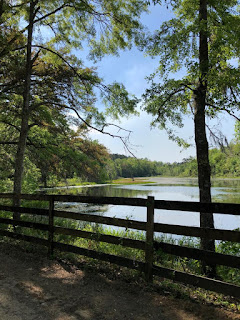 Also, I saw zero cars on my walk today. 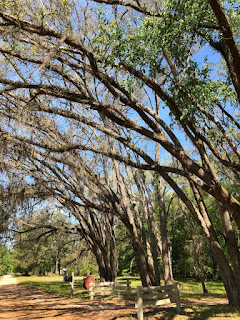 Well, that was fascinating, right?

In another non-amazing turn of events the god of the Church of Jesus Christ of Latter Day Saints (you're not supposed to call them Mormons anymore) gave the prophets a new revelation concerning the children of gay members of the church. They can now be baptized just like "regular" kids. Also, being in a same-sex marriage is no longer grounds for excommunication. It's still wrong but they're not going to kick you out. You aren't "apostate" as they say.
It's a bit difficult to understand. Policy versus doctrine. To be honest, I don't understand it but it does seem that the Mormon god reveals these sorts of things when people start leaving the church because of the old policies. And of course, "fervent prayer" is always involved.
For example- polygamy, Black men in the priesthood, and now this.
What a bunch of fucking crap.
I wonder if their god will ever reveal that humans born without penises and testicles can be part of their so-called "priesthood."
Not any time soon, I'm betting.

So that's that. I did figure out what I was going to talk about yesterday that I couldn't remember and it wasn't important at all. I'd just done some googling to see if I could figure out this weird pain below my knee when I kneel on it.
No. I couldn't.
Everything to do with messed-up knees seems to be a result of one or two of two things: Injury from repetitive motion and old age.

Thanks WebMD!
At least none of the sites I visited told me I was going to die according to the symptoms I have.
Always a plus.

I'm going to go make supper which is going to involve a few mustard green leaves. Not the giant ones. Just a few normal-sized ones. And some kale. And some collards. And some chicken thighs.
It's going to be good. I hope.
Don't tell Dearie about the chicken thighs. Not that she'd care. Hell, she'd eat chicken thighs if I gave her some. Chickens are nothing if not practical. Also, their god is eminently sensible in all regards.