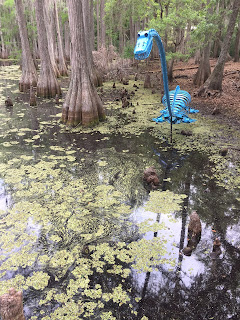 There you have the Plesiosaurus which lives in the swamp by the Junior Museum and if you look closely, you can see that it would appear that Van Gogh had stopped by and painted the water with pollen to resemble his Starry Night. There is always something new and interesting and beautiful and funny and amazing to see at the Junior. Lily and Jessie decided to take their littles today for a visit and asked me if I wanted to join them. I had woken up so filled with dread and anxiety and the images from dreams that no one needed to have had and the sky was so gray and it was so chilly that I almost said, "No," but then the thought of being alone in the chill and in the gray enveloped me with its cold tentacles and I said "Yes" and got my necessary chores done and drove from East Nowhere to West Nowhere and caught up with the girls and babies just as the wolves began to howl in their enclosure. There was a board and a sign across the walkway over the wolf enclosure which asked people to stay behind it because one of the females was about to have babies and they did not want to upset her. We wondered, as they howled, if indeed the pups were coming right then, but we left them to their privacy and walked on to see the bear who was sleeping. August kept putting his finger to his lip and saying, "Ssh."
Yes. Best not to awaken the sleeping bear. I have heard that this is good advice and I believe it. 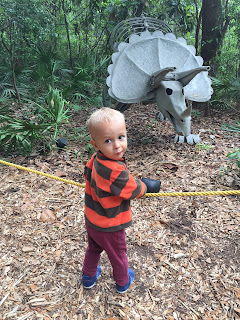 August was a little more interested in the animals and in the exhibits than Maggie was although I hear that I missed the part in front of the otter habitat where, when she saw them playing in the water, she tried to take off her clothes to get in with them. And who among us has not wished to do the same?

We didn't have time to do the whole museum. We skipped the farm part entirely and didn't even stop to play on the playground but Lily had Gibson to retrieve and Jessie wanted August to get a good nap but it was still a good time and of course I was glad I went.

When I got home, Mr. Moon was here, getting ready to leave for auction and I got his snack bag together, his popcorn made. He downloaded another book to listen to as he drove and I walked him out to the car and kissed him and asked him to please be safe and to let me know when he gets to his hotel safely. He said he would and he will.

And so here I am, alone and it is fine. I went out to give baby chicks grapes and found these guys lined up so nicely. 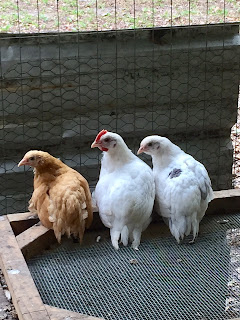 Those are three of the four that Kelly gave me and the only one I've named is "Honey," the one on the left. Owen reminded me that we used to have a Honey hen. Not really ours, she belonged to my next door neighbor but for a long, long time would stop by and get treats and then lay me an egg. I wonder if the bird in the center there is a rooster with that growing red comb and wattle. It may be that it's merely a hen whose breed grows a comb and wattle more quickly than the others and as I always say, I'll figure it out when it either lays an egg or begins to crow.

I am thinking that very soon I need to let the four little Ace Hardware Americaunas out of the baby tractor coop. They are growing nicely and I have named but one of them- Little Bear. Of course this makes me want to name the other three for characters in the Little Bear books, so beloved to my heart. I have one of the chicks whom I think would make a good Owl and one I could call Emily who was Little Bear's best friend, and perhaps I could call the last one either Lucy, who was Emily's doll, 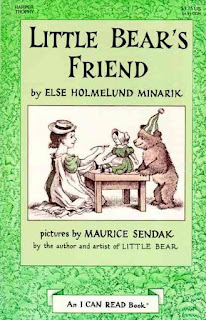 or even just "Hen," which was another friend of Little Bear's. 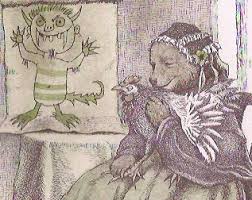 Mr. Moon will kvetch and moan saying, "We can't name a chicken Owl and we can't name a chicken Hen," but honestly- what does it matter? I'm the only one who remembers any of these names and it's not like the birds come when I call them by name. They do come when I whistle my "bringing grapes now" whistle, running like little dinosaurs across the savannah, their two legs stretched out as far as they will go, to come and get their treats.

Well, I shall study the birds and the situation and names shall be given eventually.
Meanwhile, Hawk and Dearie and Nora and Trinky and Tronky and Nicey are indeed named as is Honey and of course Mick and Violet and Camellia and Butterscotch and Trixie and Dottie and Darla and Little Bear, which leaves three white ones and three Americaunas to be christened and none of it means a damn thing except in my own little imaginary anthropomorphic world and I don't have any idea whether this is all whimsical or ridiculous but it's my little world and I cherish it, I really do and on certain days it is what sustains me along with my children and grandchildren and as such, I honor it.