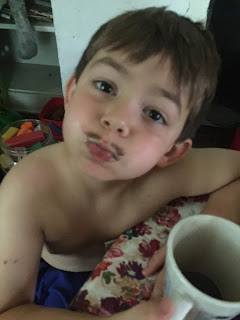 Mr. Gibson and his hot-chocolate mustache.

Goodness but we're slow around here this morning. It probably has something to do with my air conditioner not working. We finally turned it on night before last and by last night it had quit working. This has been the suckiest, worst, stupid doody headest whatever-you-call-a-heater-and-air conditioner unit in the world.
In winter the fucking heater doesn't work and in summer the fucking AC part conks out.

Okay. It's not really that hot. But still. It's going to get up to 90 later and it will be then.

So. We've had pancakes and bacon. Of course. And! Owen made his first salad! 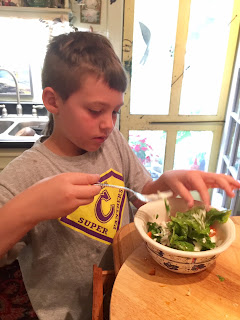 He was quite proud and it was quite tasty although we don't usually eat salad around here at 9:30 a.m. It was a project which segued from cutting up bamboo which turned out to be inedible to making an actual real salad with greens and carrots from the garden, dressed generously with ranch dressing.
Yum!

Now my kitchen looks like a tornado hit it, there's bamboo all over the back porch and Bop and Owen are out back shooting the BB gun and Gibson is doing something in the Glen Den and I hope it's not dangerous. He just told me his version of the Mr. Peep story and it was awesome! Mr. Peep married Mrs. Peep and then they turned into humans and then Mr. Peep became a cowboy and Mrs. Peep became the Little Red Hen.
He's got a good imagination that one. I'll answer something he says and he'll respond disdainfully, "I'm playing."
Oh. Sorry, dude. Play away.

I better start cleaning stuff up. And then I may spend the rest of the day laying on my bed with all of the fans on.

Did I mention the mosquitoes which are as fierce as I've ever seen them? And as Owen pointed out, we wouldn't have so many bugs if we'd fix our screens.

Keepin' it real in Lloyd.