By the time Jason got home this afternoon, Maggie needed to be run through a car wash and I was not far behind. She had been eating peanut butter on apples and when Gibson said that he wanted some too, I told him to just lick his sister.

Ah, but it was fun and Maggie absolutely slays me with her ways, her curls, her language, her smiles, her dancing and clapping and kissing. She is like the definition of a cherub baby, happy and curious and cuddly and loving. It would have been so fine if Lily had had a boy as her third child but I am as happy as I could be that she got this little woman baby to love on, to dress, to play with, to share with big brothers and sweet daddy.

After we picked Owen up at the bus stop, I was changing Magnolia's diaper in her room and suddenly, I heard Owen yelling, "MER! HELP!"
It sounded quite serious and so I grabbed up the girl and ran into the living room to find Owen and Gibson standing at both ends of the couch with it tipped up on its front edge. I thought that perhaps they were about to drop it on themselves, but that wasn't the problem. The problem was a fairly large striped lizard, fat and still as a bird on the ground with a hawk circling overhead. It wasn't one of our regular anole lizards and I just looked it up. It was an Eastern Six-Lined Racerunner and it looked like this, only larger. 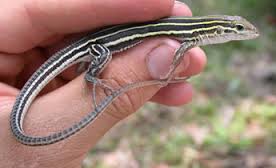 "Is it poison?" Owen yelled, still holding up his end of the couch.
"No, no. It's just a lizard," I said, and I set Maggie down and we chased the lizard towards the door but he ran behind the TV and I suspect it is still there.
After we'd settled that problem, sort of, we put the couch back down and all was well. Owen had found the toy he'd been looking for and then he sat down to do his homework and I finished pulling Maggie's britches up and then Daddy came home and I passed the peanut butter confection to her father and kissed everyone good-bye and came home where I did some ironing.

So, Hank told me about a show on Netflix called Samurai Gourmet and he said it was sweet and funny and each episode was only 22 minutes long and so about a week ago, Mr. Moon and I watched an episode. It's all in Japanese with English subtitles and it's delightful. It's about a 60-year old man who has recently retired from his job. He has been a company man his entire life, following all of the rules, doing exactly as a company man should do, and now he has freedom and he isn't quite sure what to do about it but (and this part is a little forced, if you ask me but whatever) a Samurai begins to show up who shows him the way of being his own man, specifically through food.
He has a beer at lunch!
He spends the night away from home and has a beautiful breakfast with smoked mackerel which sends him straight back to his boyhood.
And he eats amazing noodle soup.
That soup looked so good that I have determined to try and make some. Simplicity in itself and I have a broth simmering with chicken stock and a bit of kale to substitute for seaweed, of which I have none, a little soy sauce, grated fresh ginger and a garlic clove. I have tofu and mushrooms and green shallots from the garden as well as sugar snap peas, a bit immature in their sweet pods. And a package of rice Udon noodles from the Costco.
I really have no idea what I'm doing and I should have miso but I don't and none of the recipes I find online really seem to be what I want so I will just go about it as I will and hopefully, however it turns out, it will be fun to eat the noodles with chopsticks and slurp the soup from our bowls.
I will also make the simplest of salads with sliced cucumbers and Tamari and rice vinegar to go with the soup.
And that shall be our supper tonight.

My anger has dissipated as the day has gone on although the pictures going around online of Trump in the Oval Office, posed with Sarah Palin, Ted Nugent and his wife, and Kid Rock and his girlfriend do actually enrage me. This, however, is a time to try and be as Zen about things as possible, I suppose. Perhaps there is some balance as Bill O'Reilly is forced off of Fox, albeit with a shit ton of money in his pocket proving once again that racism and lying and sexual harassment pay well in the United States of America.
I don't know. I don't know shit.
All I know is that the world has turned upside down since last November and yet, here I am with the prettiest garden of my life and 21 chickens and four grandchildren and another one coming and everyone I see is just doing the best they can.

Let's keep on doing that while at the same time, staying in touch with our inner Samurais, whatever that may mean to you.