It's In My Nature 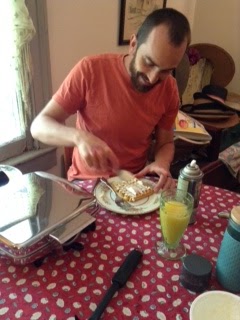 I asked Vergil and Jessie and Lily out for pancakes and bacon this morning but our menu changed when Vergil asked if he could bring his brand new vintage Sunbeam waffle maker which he is currently in love with.
"Of course!" I said, and I made up the batter and cooked the bacon and he cooked us one delicious waffle after another in his waffle maker and they were all crispy on the outside and perfectly cooked on the inside and we ate them like little waffle piggies. 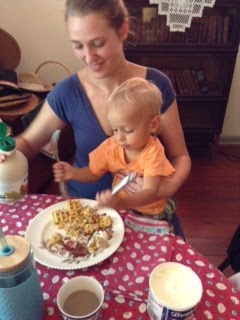 August is learning to use utensils!

I took pictures of everyone else but none of them came out well. I was using my iPad because my iPhone started refusing to charge last night and my heart was breaking and I was worried because how do I live without my phone, meaning, how do I go about my life without listening to a book at all times, not to mention all of that other stuff like taking pictures and texting and looking up random things on the internet whenever I have a question?
And so forth.
So I asked Vergil to take a look at it and he did, quite literally, look into the little charging port and he said, "Oh, I see your problem right here," and he took a needle and dug out a little piece of something, probably leaf mulch, and now it charges perfectly and all is well in my world again. Or at least that part of my world, anyway.
Thank you, Vergil.

And I have not done much today. I have rested, just like the Bible tells me to do on a Sabbath. I did finally go out to the garden and plant two more rows of peas, one black-eyed and one zipper cream. My garden is now, at this very second, almost exactly the way I've always wanted a garden. When it's time to plant something, all I have to do is go out and rake a row naked from the mulch and plant my seeds in that earthy breast. Of course it's still early on in the year and there's plenty of time for weeds to take hold and then take over but right now, it's almost weedless and beautiful. 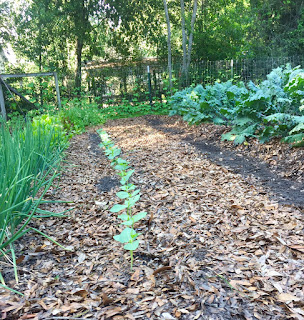 Those are shallots on the left, then a line of black-eyed peas, then my new row which I just planted in zipper cream peas, and then the winter kale. Also, behind the shallots are lettuces which we are still eating in salad although their time is coming to an end and they are starting to bolt.
It's been a real good run though.
I need to pull some of that kale. We will never eat all of that and I could put something else in there like maybe zinnias or cantaloupes. It's just so hard for me to pull a perfectly healthy plant out of the dirt. The collards are in the same category. They are huge and glorious still, but dear god, we're not going to eat all of them and they are literally shading out the tomatoes.

Owen and I went out and picked sugar snap peas this morning after our waffles.
"I'm on a pea rampage!" he said. Rampage is one of his new favorite words. When we were eating he announced he was on a bacon rampage.
As we picked, he and I were talking about the garden and about chickens and he said, "Mer, you're a farmer."
"No I'm not," I told him. "I'm just an amateur gardener."
"No," he said, picking another pea and putting it in his mouth, you're a farmer."
Well, I'm not and thank goodness because I couldn't keep any of us alive with what I grow. It's all just lagniappe and joy and extra but it does feel good not to have to buy too many vegetables at the store and no eggs at all. I hate the thought of going through those bags of salad greens in just a few weeks, looking for one that doesn't look like the greens need to go directly into soup with no stop in the salad bowl. We are spoiled by the freshness of our greens, picked, washed, and made into salad with olive oil and vinegar, salt and garlic. We never get tired of it.

I often wonder where this desire and need to get in the dirt and plant came from. It is strong with me. So strong that even my stepfather's love of gardening did not ruin it for me and that's saying something. He used to plant a big garden on the lot across the street from our house in Winter Haven, right on the lake, which was not something one did in those days. I never participated in that garden but when I grew up and moved out of the house, the desire to grow things arose in me as strong and true as the desire to cook and make bread did.

I suppose I am a peasant woman and that is simply that.

Oh well. It all keeps me out of the pool halls.