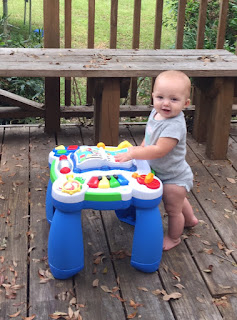 I tell you what- this whole being physical and productive shit is killing me. I was doing great up until about four-thirty this afternoon at which point I thought I might die. But I did not die, as per usual, and got Mr. Moon on the road to auction with his snack bag and popcorn and kisses and admonitions to be safe and to text me when he gets there and so forth.
Because, you know how it is- the ONE TIME I forget to tell him to be safe, he won't be and it'll be MY FAULT.
That is in the Mother's Handbook which is issued to every woman when a baby she's either given birth to, adopted, or perhaps just came in contact with, triggers the delivery of. You've never seen a copy, you say? That's because you've never looked at a mother's DNA under an electron microscope. It's there. Trust me. And some of the stuff in it is transferable to being a wife, too.
Definitely for being a grandmother.
So. You see that darling girl? You know what I let her do today? I let her chew on a dead, dried up tiny worm.
Yes. Yes I did.
We were outside and she was chewing on something and so I did the mouth-sweep, as you do, and was horrified to discover not the leaf I was expecting, but a tiny curled-up worm jerky.
Oh Lord.
Well, good for her gut bacteria, right? What could possibly have more beneficial bacteria than a worm? Have you seen any of those yogurts or probiotics advertising themselves as having more beneficial bacteria than worm jerky?
No. You have not.
Because they don't.
I need say no more.

So I did my job as a grandmother today and also, I kept all three of the children alive which is not as easy as it used to be since Owen learned to climb trees and swing from the branches like Tarzan or a monkey.
Gibson is sick with jealousy that he can't climb the tree and desperately wanted me to put him up there and I not only refused, I told Owen that he had to come down because it was making his brother crazy but I don't think I fooled him. He knew exactly who was being made crazy.

But we had a good time and when I left, Owen said that I should tell Boppy that "Owen loves him," and then Gibson chimed in and said, "Me too. Tell him that Gibson loves him," and Maggie, safe and happy in her mama's arms actually reached out her arms to me and I held her one more time before I left, giving her one more chance to rip my earring out of my earlobe but I deftly avoided her quick grasp and handed her back to her mama, earlobe still intact, cheek kissed again.

And so, a day that started out well looks to be ending well and the little birds went outside the coop today and then went back in and I even took the trash and recycle and did laundry and I've washed my new nightgown for premium softness and oh, boy. I sure am looking forward to bed and my book.

I'd love to post a video Jessie sent me today of August demonstrating how to say "book" in both English and sign language but unless I post it first to Youtube, I can't figure it out and dammit, I just don't have the energy for that sort of foolishness tonight.
It's amazing and funny and as I was saying just a few weeks ago, no matter how many times I went through the normal development of a child with my own kids or saw it in my friends' kids, every time I see it again, it blows me away and makes me believe that each of my grandchildren are geniuses.
Which, of course, they are.

Which, of course, they all are.