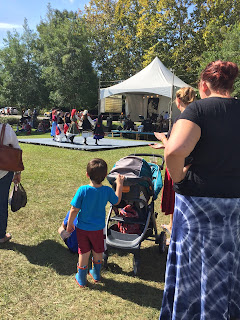 It has simply been a most beautiful day. The air has been moving, the earth breathing, bringing us drier, cooler weather, the sky so blue, everything sharper and clearer than in months. We had such a good time at the Greek food festival. We ate good things and we ended up sharing a table with my ex- and his wife who were there with their granddaughter and she and Owen and Gibson played on the church playground together and they would run back to the table for another bite, to ask again for us to explain how they are all related which is difficult, but also easy, in a way.
I have said it countless times and I will say it again- one of the blessings of my life is that these people are part of my family. We share an easy comfort together, we are friends and there is true affection among us all.

The festival was heavily attended but it is a smallish thing and we all felt comfortable and never crowded. There were things to look at for sale and there was Greek dancing and Greek music and there was face painting. 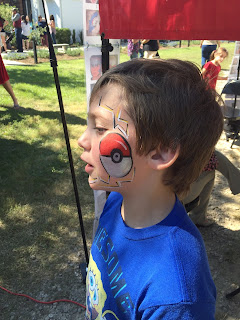 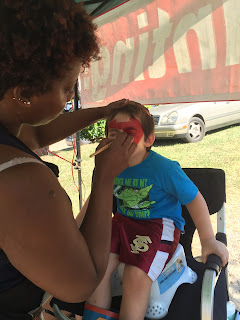 "Oh Mer! Please!"
What are grandmothers for but to pay for face-painting? Gibson was concentrating so hard to stay still, to keep his eyes shut when they were supposed to be shut, to not touch the paint and ruin it. He did a good job.

Hank recently gave Owen an old leather satchel he'd come into possession of, something that looks as if it had been used in the military and it has places in it for notebooks, for pens, for scissors, for pencils. I bought a notebook and some markers and colored pencils for Owen to carry in it and he brought it today and spent a good deal of time sketching. 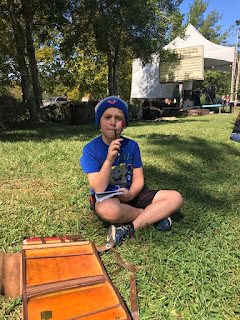 He is suddenly looking so much older to me. Today he resembled some hipster artist and I can see him pushing the physical bounds of his existence, dashing off to the great consternation of his mother and his grandmother, to explore on his own. WHY must the inevitable trip from nest to world start so early? So persistently?
Sigh.
Because it must.
Wings do not develop suddenly and on their own. They grow, they are tested, they become stronger. And this is the reason we have children. We are raising them to be their own people, adults who can survive and thrive in this world but it's so easy to forget that, to be distressed, even, about it when just about two blinks and a nap ago they looked like this. 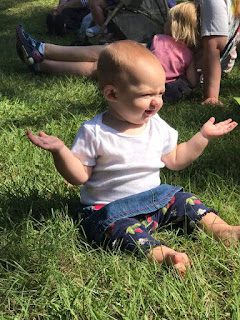 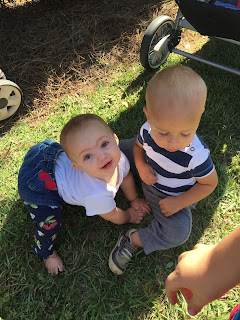 And even those two babes spent half their time on the ground crawling away from their mamas to explore what looked to be like someone else's juice box or snacks or simply something of interest. They crawl away, we scoop them up and bring them back, they are content for a moment or two and then away they go again.

After we had spent all the time we needed to spend at the festival, we left for the Costco and on our way there, Gibson, who was at that moment eating bites of delicious Greek desserts, asked if he could get samples at Costco.
"Yes," his mother told him. "You can."
"Oh, good," he sighed with contented anticipation. "Those samples are so good." 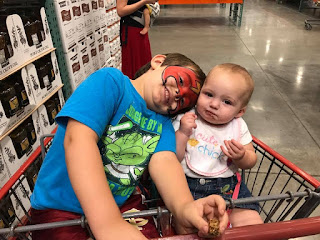 And samples were sampled and Owen collected his, as he does, to save for the drive home and the coldy room was cold and made Maggie grin and we looked at the toys and I didn't buy one thing, having already been this week and I'm not sure why, but we always have such a good time at the Costco.
Samples probably have a lot to do with that.

And so- that was my day. So simple and so easy and when I got home I texted Jessie and Lily and thanked them for sharing their lives with me. It truly is one of the most amazing things to me that my children all live nearby and that we do things together and that I can be a part of their lives, my grandchildren's lives. When Maggie or August hold their arms out to me, I melt and I reach for them and I hold them against me and pat their little backs or tummys and nuzzle them and pretend-bite them and it's like a distillation of the love I felt for their mothers when they were babies, but with so few of the real responsibilities, simple joy left in the sweetness of the brew. Same with these older boys as they hug me, talk to me, tell me things, listen to me tell them things, show me things, share with me whatever they want to share.
It's a fucking miracle is what it is.

So here I am in Lloyd and the chickens are settling themselves into the roost. I can hear their twittering as they settle into their sleeping arrangements.
And, as if on cue, Jessie sends me this.


Oh Lord. There will soon be no stopping him and thus, here we go.
Those little drunken sailor steps will turn into more confident ones and those legs- oh god! Where will those legs take him in his amazing life?

Away and back, as they are supposed to do.

I am so grateful for this day, for this life, for these moments and for this ability to mark them down, to say this happened on this day and for this moment, it was everything it was meant to be.