By the time I realized I hadn't posted anything this morning it was already about 12:30 and then I realized that no one on this god's green earth gives a shit whether I post anything anyway so fuck it.
Well, it wasn't really a fuck-it as much as it was just a who-the-fuck-cares, plus I was really hungry and after I ate my lunch it was even later so there you go.
Or, there you didn't go.
Okay. So, speaking of giving a rat's ass, about four days ago I went into my little library to look for a book and I thought to myself, "Something is dead in here." The odor is unmistakable but it wasn't overwhelming and I did not have the emotional resources to deal with a dead thing at that moment and so I did what we often do when we absolutely know there's a rotten potato or onion in that bag somewhere but we just stick our head into the sands of denial and shut the cabinet door and pretend we didn't smell what we just smelled.
So yesterday, after our beautiful trip to Panacea, Vergil and Mr. Moon had to go sight a gun (I say this with great authority as if I knew what "sighting a gun" is all about and I suppose I have a vague idea but in fact, it must a far more involved exercise than I know because it always takes a very long time and must be done at a friend's house where Mr. Moon and Vergil and Jason sometimes hunt) and so Jessie and August and I hung out at the house which was fine because August was being his goofy great self and showing great interest in the chickens which he now calls "bawks" 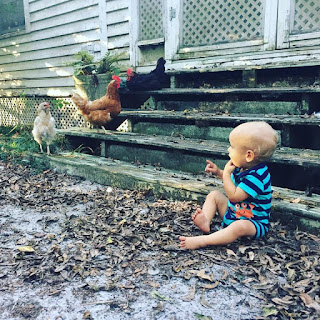 and booty-dancing to the Rolling Stones in the hallway and turning the knobs on the record player with great DJ skills and also playing the piano while sitting in his mother's lap and so forth and at one point (could this sentence go on any longer? stick around and find out) we went into the library and I knew without a doubt that yes, something in there was dead and it was behind the love couch as Owen calls the love seat.
So, I did finally look behind the little sofa and yes, there was a dead thing and it was a rat's ass.

I told Jessie and she looked at it too and agreed that indeed, it was a rat's ass (the tail, oh the tail!) with some of the connected part of the rat still attached and I said, "I am not dealing with this. Your father can deal with it when he gets home."

Which he did. For some reason (God hates me) I almost always find these grim and gruesome cat gifts when Mr. Moon is not just down the road sighting his gun but in fact, in either another state or another country entirely and thus, I am always having to deal with this shit by myself but in this case, all I had to do was shut the doors of the library and wait until he got home which I did.

So. Why did I just tell you this story?
I have no idea.
Just like I have no idea where the really pretty hand towel I just found while I was tidying up the dishtowels in the cabinet where they live came from. Or the white linen napkins I found. I have absolutely no memory of these items but there they are and I do not think that anyone's trying to gas-light me but in fact, I am simply losing my mind. 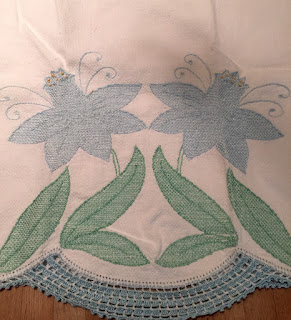 That is ALL handwork! The embroidery and the crocheted edges. It's like it would have taken a Belgian nun a year to do that and obviously, no one in this world has ever wiped a dainty finger on the towel and where did I get it?
If you gave it to me, please let me know. It will relieve me to have that knowledge but then I will forget again and there you go.
I should frame this thing it is so beautiful.
I'm not even going to begin to discuss the white linen napkins which are also beautiful.

So this is what it's like to be Ms. Moon at the age of 62. I had a very nice day of staying home and I took a walk and I hung all the laundry on the line and I weeded some in the garden and I picked and thinned some more microgreens for our salad tonight and I have cooked garbanzo beans to make our supper with and yes, I tidied that cabinet where I found the towel.

It is indeed Halloween and I keep forgetting that except for hoping that no one comes by Trick or Treating (they never do) because the bag of Dove dark chocolate pumpkins I bought for emergency distribution has been depleted to almost nothing by Mr. Moon and also the boys and yes, I've had one or two myself.

I better go start that Greek chicken stew with cauliflower which I am making tonight without chicken but with garbanzo beans. I hope it's fit to eat. Luckily, I have a husband who is grateful for everything I make and always thanks me for whatever I put in front of him.

I do not have much use for Halloween with its fun/scariness and perhaps that is because simply living my life is scary enough and no costume needed.

Dark chocolate, however, is.

I hope all of your Halloween wishes are coming true, whatever the hell that may mean, and may all of your cats eat the entire rat and not leave any for you.